The Afghan peace process entered a pivotal phase with the start of the long-awaited intra-Afghan negotiations in Doha on September 12. Shortly after the talks commenced, however, the process was stalled due to disagreements over the procedural rules for the negotiations.

One of the two main points of divergence concerned the Taliban’s insistence on a particular Islamic jurisprudence – the Hanafi fiqh – as the sole religious basis for the negotiations. (The other issue revolved around whether or not the US-Taliban accord should form the overarching foundation, or the “mother deal,” underlying the intra-Afghan talks.) 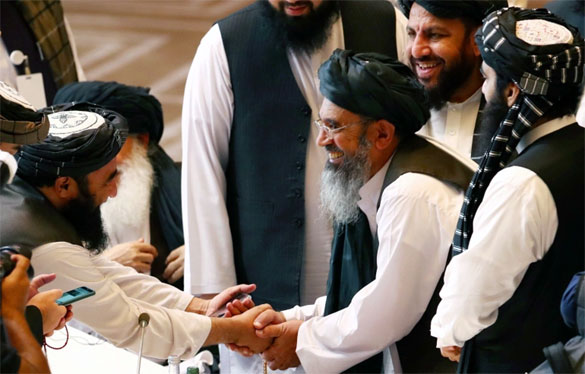 While the Hanafi jurisprudence is practised by most Sunni Muslims in the country, the Taliban’s obdurate stance would de facto exclude millions of other Afghans who are Shia Muslims or members of other religious minorities.

By contrast, the Afghan government proposed to rely on the Hanafi jurisprudence by default while also respecting the religious liberty of Shia Muslims and other Afghans. The government’s position largely reflects the Afghan constitution which underscores the centrality of Islam – rather than a particular Islamic jurisprudence – in governance and virtually all aspects of Afghan life. The Taliban, of course, dismiss the current constitution as un-Islamic.

These preliminary disputes, while frustrating, help lay bare the contours of the Taliban’s real vision for Afghanistan. For a long time, the group’s default answer to questions regarding their approach to governance, from elections and judicial philosophy to free speech and women’s rights, consisted of a well-rehearsed and vague notion – an “inclusive Islamic” emirate.

That vagueness, however, is slowly dissipating.

The Taliban’s oft-repeated inclusivity, concerning religious matters for a start, appears to have certain caveats. The Islamic emirate’s intransigent refusal to recognise the religious liberty of Shia Muslims and other minority groups sends an ominous signal to millions of Afghans who have long worried about what life under the Taliban, as part of a power-sharing arrangement, may resemble.

The Taliban’s parochial view of Islam is particularly instructive against the historical backdrop of their persecution of ethnic and religious minorities. One of the most notorious atrocities in Afghanistan’s 40-year conflict, to give but one example, was the Taliban’s massacre in Mazar-i Sharif in 1998 of thousands of Hazara civilians – targeted because of their ethnicity and religion (Hazaras are mostly Shia Muslims). During the mass killing, the Taliban presented three options to the Hazaras: “become Sunnis, leave Afghanistan, or risk being killed”.

The Hazaras and other minority groups have faced these grim choices for centuries in Afghanistan. Sikhs and Hindus are leaving the country in droves. Afghanistan’s sole Jew, meanwhile, lives an uncertain and precarious life.

Afghans often pride themselves on the strong solidarity and cohesion between Sunni and Shia in the country. That is certainly true considering the scale of religious sectarian violence in the broader region. The Taliban’s rhetoric and actions, however, jeopardise that cherished sense of Afghan unity.

Moreover, the Taliban’s lingering disdain for Shia bears an eerie resemblance to the ideology behind the continued targeted attacks against Shia and Hazaras claimed by (relatively nascent) terrorist groups such as ISIL (ISIS), and their affiliates, in Afghanistan. While the Taliban and ISIL may generally view each other as foes, when it comes to targeting ethnic and religious minorities, there are concerns about their strategic collaboration.

Investigations of war crimes and crimes against humanity in Afghanistan must comprehensively examine the conduct of groups like the Taliban, ISIL and al-Qaeda, including their organisational policies and official pronouncements which may evince persecutory intent on, inter alia, ethnic and religious grounds.

The Taliban’s exclusionary vision is not merely confined to the rejection of other Afghans’ religious freedoms. Rather, it seems to pervade their entire ideology and, hence, modus operandi. A closer scrutiny of life in Taliban-controlled areas as well as the composition of their Doha delegation – the Islamic emirate’s public relations opportunity before global audiences – reveals further exceptions to their concept of inclusivity.

Notwithstanding repeated claims that they support women’s rights, for instance, the Taliban has continued to attack girls’ schools. Also, women and young people, while comprising most of the country’s population, are conspicuously missing from the Taliban’s negotiating team. Moreover, despite Afghanistan’s rich pluralism and cultural mosaic, there is extremely little ethnic, religious, linguistic, cultural and professional diversity within their ranks. This absence speaks volumes. It tells us, through calibrated action rather than hollow rhetoric, who is actually welcome in the Taliban’s emirate.

The blatant inconsistency between the Taliban’s mantra of inclusion and praxis of exclusion, this early in the intra-Afghan talks, should not be a surprise. The Taliban has already reneged on its counterterrorism pledges to the United States by continuing to operate closely with al-Qaeda.

The Islamic emirate’s recurring duplicity, however, must serve as a reminder of the perils of hastily taking a leap of faith towards the Taliban. A lasting peace, after all, is possible only through a genuinely inclusive process – not through one masquerading as such.

Mehdi J Hakimi, An expert on Afghan law, he was the former Chair of the Law Department at the American University of Afghanistan. Hakimi has managed global legal reform initiatives sponsored by the US Department of State. He has advised international organisations, governments, elite academic and research institutions, and global law firms on, inter alia, the Afghan legal system.

Original Headline: The false inclusivity of the Taliban’s emirate