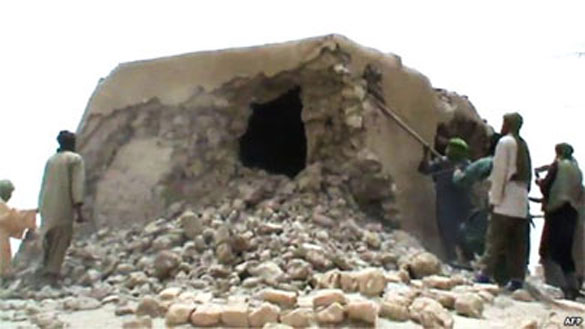 FILE - This file photo taken on July 1, 2012 shows a still from a video of Islamist militants destroying an ancient shrine in Timbuktu. The trial of a Malian jihadist charged with war crimes for ordering the 2012 destruction of 14 mausoleums of Muslim saint

Judges at the International Criminal Court in The Hague began considering arguments  Tuesday on whether to open the court’s first-ever war crimes trial targeting the destruction of religious or cultural heritage.  Malian citizen Ahmad al-Faqi al-Mahdi is accused of overseeing 2012 attacks on cherished religious sites in Mali’s ancient city of Timbuktu.

The hearing was unprecedented for a court better known for judging crimes such as rape, killing and sexual slavery. On Tuesday, judges at the International Criminal Court instead considered whether there was enough evidence to bring to trial another kind of crime — the destruction of cultural and religious heritage.

Former trainee teacher and alleged jihadist Ahmad al-Faqi al-Mahdi is accused of planning and leading the destruction of nine mausoleums and the door of an ancient mosque in the northern Malian city of Timbuktu in June and July of 2012. All but one of the buildings were designated United Nations (UNESCO) world heritage sites.

Timbuktu is known as the “city of 333 saints,” and has been an important trading and religious hub for centuries.

In opening remarks before a pre-trial chamber, ICC Prosecutor Fatou Bensouda argued the mausoleums’ demolition by Islamist radicals amounts to nothing less than the destruction of the soul and history of a community — and a loss for the world.

“What is at stake here is not just walls and stones. The destroyed mausoleums were important from a religious point of view, from an historical point of view and from an identity point of view. Such an attack against buildings dedicated to religion and historic monuments falls into the category of crimes that destroy the roots of an entire people and profoundly and irremediably affect its social practices and structures.”

The prosecution claims al-Mahdi, an ethnic Tuareg who is believed to be in his 30s, led a morality squad in Timbuktu and was a member of militant group Ansar Dine, an ally of al-Qaida in the Islamic Maghreb.

The Islamists captured Timbuktu in May 2012, imposing a harsh rule on the local population before French soldiers finally drove them out, almost a year later.

Al-Mahdi appeared to listen carefully to the prosecution’s arguments. He sported long hair, a beard and spectacles.

He spoke briefly, saying he understood the charges against him.  He has previously denied them and his lawyers will make his case during the hearing.

Besides the Timbuktu monuments, the Islamic State militant group’s destruction of temples in Syria’s ancient city of Palmyra and the Taliban’s 2001 demolition of massive Buddha statues in Afghanistan have also sparked global outcry.