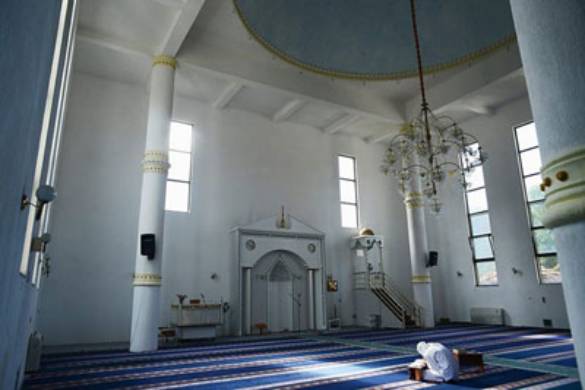 The imam of this mosque in the rural mountain town of Rudozem complains that secret police have been spying on the local Muslim community. (Tzvetelina Belutova/Special to The Washington Times)

Thirteen religious leaders accused of preaching radical Islam face up to five years in prison in a criminal trial that’s testing the limits of religious freedom in this European country.

Prosecutors say the Saudi-financed activities of the imams have been spreading religious extremism and that they have used a local soccer team to indoctrinate boys.

But local officials say the accused ringleader, Said Mutlu, 49, who ran an imam school in the village of Sarnitsa, has done nothing wrong and the case is slandering the Muslim community.

Prosecutors allege that three of the imams were undermining the state by encouraging people to boycott parliamentary elections and spreading religious hatred.

The imam of this mosque in the rural mountain town of Rudozem ..

The other 10 are implicated in working with Al Waqfal Islami, a Saudi-financed charity that built mosques, sent boys on trips to the Middle East and financed religious education in Bulgaria that prosecutors say embraced the Salafist brand of fundamentalist Islam.

The Bulgarian government closed Al Waqfal Islami in 2003, but prosecutors say the 13 accused continued its work without a license.

(Corrected paragraph) The trial, which resumes Monday, is a test for Bulgaria on whether this former Soviet bloc country will criminalize religious association.

It has been sensationalized in Bulgarian media, with photos of sympathetic demonstrators being branded “jihadis” and “Taliban.”

Regardless, large groups continue to demonstrate silently outside the central courthouse in Pazardzhik during each court hearing, holding banners and placards.

Unlike the majority of Bulgaria’s Muslims, the people in these southern districts of the country are not ethnic Turks. They call themselves Bulgarian Muslims and have little affinity to neighbouring Turkey.

This mountainous region has seen many of its mines shuttered, and many of its inhabitants eke out a hardscrabble existence by cutting timber and farming potatoes.

One of the accused, Hayri Sherifov, runs the central mosque in the mountain town of Rudozem. He says he studied Shariah, or Islamic, law in Saudi Arabia on a scholarship to train imams because there were no such opportunities in Bulgaria.

“These people have needs. They need someone to teach them religion,” Mr. Sherifov said.

Upon his return, he says he found himself under suspicion by Bulgaria’s internal security agency, DANS.

“We have always been squeezed by DANS,” he said. “I don’t remember a year when I wasn’t called in for questioning — there were even some threats. They call you in, you sit on a chair, and three or four guys surround you like you’re guilty of something.”

Security officials did not respond to requests for comment.

But a senior DANS official who asked not be named because he’s not authorized to speak to the media confirmed that intelligence agents have been keeping tabs on foreign religious donors since at least 2005.

“Everyone who goes abroad for training is monitored because he could be the so-called sleeper cell,” the official said.

He said there are troubling signs that Bulgarian Muslims are being exposed to radical elements, though he questioned whether there’s enough evidence to convict anyone.

“We’ve found literature for spreading jihad. There are all the signs for a Wahhabist movement,” the security official said, referring to a conservative sect of Islam practiced in Saudi Arabia. “But there are no facts, no solid evidence that could hold up in court.”

The trial also has a political dimension.

Earlier this month, Volen Siderov, leader of the far-right nationalist party Ataka, which holds a few seats in parliament, called for a moratorium on mosques.

“We are traditionally an Orthodox country. That’s what it says in the constitution,” Mr. Siderov told Nova TV. “We hope there are enough patriots in the National Assembly to ban the construction of mosques.”

Mr. Siderov’s remarks reflect only a fringe of society, but it’s rhetoric like this that makes Bulgarian Muslims uneasy about their image.

In the 1980s, the communist government forced many Muslims to change their names. Mosques were closed, and head scarves for women were banned.

Deadly riots ensued, pressuring the government to open the border with Turkey in 1989. Some 300,000 Muslims — mostly ethnic Turks — fled to Turkey in what the parliament recognized this year as an act of “ethnic cleansing.”

“After 1989, the Muslims in the Rhodope Mountains became very disappointed that no one defends their interests,” he said.

So long as the state refuses to support its domestic Muslim population — in the same way Orthodox Christian schools are supported — Bulgarian Muslims will seek religious training elsewhere, he added.

“The money given by the state for the Muslim education is extremely little, so any rebuke over foreign financing isn’t really fair,” Mr. Ivanov said. “If they don’t want [foreign donors], they should finance it themselves.”