After Shah Ahmad Shafi a Bangladeshi Islamic Scholar and The Chief of Hefazat-e-Islam Bangladesh, Hardline Islamist Advocacy Group of Madrasa Teachers and Students Future Is Uncertain 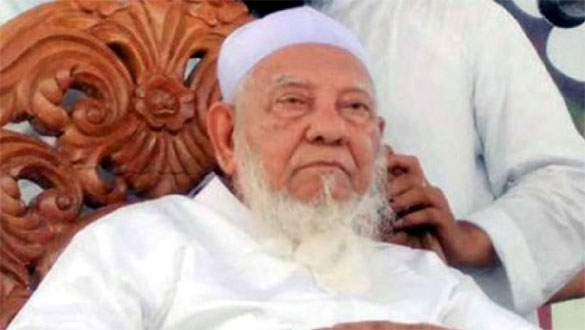 Bangladesh’s most powerful faith-based organization, the hardline Hefazat-e-Islam, may split after the death of leader Ahmed Shafi last week, say analysts who expect infighting between a faction allied with the prime minister and one that supports the opposition.

Political observers expect a war of succession over who will take the reins of the organization that controls 25,000 madrassas, or religious boarding schools, in the Islamic majority country. 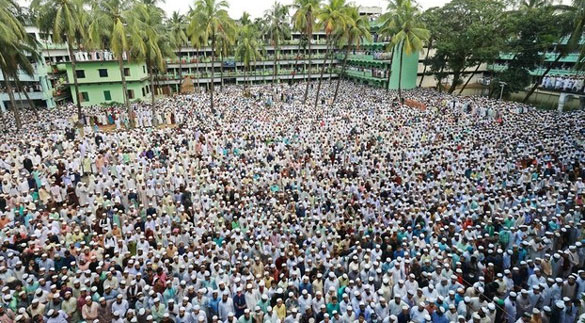 Shafi and his son had been at odds with Babungari for months, with a turf war unfolding at Hathazari – the group’s main madrassa and that serves as its headquarters in Chittagong – since June.

Babunagari, who’s been with Hefazat since its inception in 2010, covets the leadership of the group, according to a noted Islamic scholar in Bangladesh.

“So, I think Hefazat may split in two – one group led by Anas Madani and the other led by Babunagari.”

Last Thursday, on the eve of his death, Shafi was forced to remove his son from the post of assistant director of the Hathazari madrassa following a massive protest over his plans to make his son the head of Hefazat. On the same day, Shafi, too, was forced to resign as director general of Hathazari.

Anticipating just such a revolt, Shafi, in a pre-emptive strike in June, removed Babunagari as assistant director of Hathazari. But Babunagari struck back last week, mobilizing some 10,000 students to revolt against Shafi on Wednesday and Thursday.

Dr. Nizam Uddin Ahmed, a professor of political science at Chittagong University, said Shafi was generally accepted as a leader by most Hefazat rank and file, but his son Madani wasn’t.

“Possibly Babunagari mobilized anti-Madani leaders within Hefazat and they staged a huge protest inside the Hathazari madrasa. Shafi was forced to sack his son and also resign as the director general of the madrassa,” Ahmed told BenarNews.

Shafi, who was believed to be more than 100 years old, died of age-related complications at a hospital in Dhaka late Friday.

Soon after he was buried in a funeral the next day attended by tens of thousands of people in Chittagong, the management of the Hathazari madrassa appointed Babunagari as education secretary of the madrassa, said Salahuddin Nanupuri, one of the members of the madrassa’s governing council.

“We will hold a meeting within one month to elect a new leader of Hefazat-e-Islam,” Nanupuri told BenarNews.

Few people had heard of Ahmed Shafi when he formed Hefazat in 2010, said Dr. Shantanu Majumder, a professor of political science at the University of Dhaka.

Shafi came into the limelight three years later when he organized a massive rally in Dhaka in May 2013, demanding the introduction of Sharia law, including a blasphemy law with a proviso to execute secular bloggers and those who defame Islam.

The rally followed the brutal slaying in February 2013 of secular blogger Ahmed Rajib Haider, and preceded a string of machete-killings of other bloggers carried out by Muslim zealots in 2015 and 2016.

Back in 2013, the Awami League government mobilized the police who then commenced operations to end the rally. The huge crowds dispersed soon after, but it was a violent end with officials saying 39 people, including policemen, were killed.

The Awami League, a party with roots in secularism, didn’t implement Sharia law. But as the 2018 elections loomed, the party decided to court the support of faith-based groups, in a bid to counter the challenge from the opposition BNP, which aligned with the controversial Jamaat-e-Islami, the largest Islamic party.

The group Hasina was eyeing for support was Shafi’s Hefazat-e-Islam, and she began making concessions to the hardline organization.

In April 2017, she announced that her government would recognize degrees from thousands of unregulated Qaumi madrassas – Islamic boarding schools. She also agreed to changes in public school textbooks to make them more “Muslim-friendly,” as demanded by Hefazat.

A little more than a year later, in November 2018, less than two months before the general election, Hefazat honored Hasina for recognizing these educational degrees.

The University of Dhaka’s Majumder said Hasina “maintained a carrot-stick policy toward Hefazat,” which kept it on the government’s side for a while. Hefazat’s position now isn’t as clear.

“Babunagari is in a strong position within the organization. But the attendance of huge number of people at the funeral of Shafi indicates that Shafi’s name won’t wither away from Hefazat-e-Islam,” Majumder said.

“The developments in the last several days indicate that the anti-government element within Hefazat is stronger. It is difficult to predict how long this will drag on.”

Majumder predicts the fight for Hefazat’s leadership will get complicated in the days to come.

“The post-Shafi Hefazat’s future is uncertain. We should not be surprised if Hefazat splits,” he said.

For its part, the Awami League hopes Hefazat’s future leaders will remember that the Hasina government recognized degrees from Qaumi madrassas, said Shajahan Khan, a member of the party’s Central Working Committee.

“This is very difficult to predict whether the pro-Shafi group or Babunagari group would dominate Hefazat-e-Islam,” Khan said.