Some Bangladeshi Islamist militant leaders and their outfits have had longstanding relations with the terrorist organisation al-Qaeda and its leaders, including Ayman al-Zawahiri, an audio message of whom has caused concerns across the country since Saturday.

The links have been established through journalistic investigations, findings of independent and local researchers, and government investigators, and records in different considerable websites. 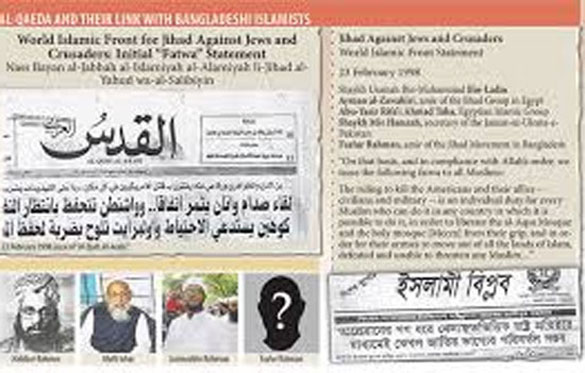 The country’s first openly formed Islamist militant outfit Harkat-ul-Jihad-al Islami (Huji) was not only the Bangladeshi chapter of international Huji, but the leaders of this organisation were also linked with al-Qaeda leaders including slain founder Osama Bin Laden. Many of those Huji leaders are now at the helm of Hefazat-e-Islam.

Huji officially emerged through a press conference at the National Press Club in the capital in 1992. The press conference was addressed by a group of Bangladeshi Afghan war veterans who had gone to Afghanistan in the 1980s to join hands with the local Mujahideens there against the then Soviet occupational force.

Maulana Muhammad Habib ur Rahman, widely known as Bulbuli Huzur, was one of the organisers of Hefazat’s long march and Dhaka rallies last year. He also addressed a rally.

He is the founding principal of Jameya Madania Islamia of Kazi Bazar Madrasa in Sylhet city as well as Ameer (chief) of Bangladesh Khelafat Majlish and convener of Sahaba Sainik Parishad. Habib ur was leader of the banned Islamist militant Huji Bangladesh and has links with international militant groups.

He himself exposed the links in his interview published on August 20, 1998 in Sylhet in a bulletin titled “Islami Biplob” (Islamic revolution). The publication was released on August 20, 1998 to celebrate “the total victory of Talibans and establishment of an Islamic state in Afghanistan.”

In the interview, Habib ur said: “It is possible to change the fate of the nation only by establishing a Khilafat [pan-Islamic movement]-based state following the path of Taliban.”

Habib ur revealed the names of people with whom he had travelled to Afghanistan via Pakistan in 1988, visited some Taliban militant camps and also met al-Qaeda leader Osama bin Laden.

Other Huji Bangladesh top brass include Shaikh ul Hadith Allama Aziz ul Haq (passed away in August 2012), who was also chief of a faction of Islami Oikya Jote, a former partner of the BNP-led alliance; Ata ur Rahman Khan of Kishoreganj; Sultan Jaok of Chittagong; Abdul Mannan of Faridpur; and Habibullah of Noakhali.

All of them were involved with different Islamic organisations and madrasas. Ataur was a BNP lawmaker during 1991-1996 from Kishoreganj 3 constituency.

During his trip, Habib ur had a dinner with some others including Laden, son of one of the richest Saudi families, who formed al-Qaeda in 1988.

In the interview, he asserted: “An invitation from Harkat-ul-Jihad-al Islami made it possible for me to make the fortunate trip to Afghanistan.”

The Bangladeshi delegation was given Kalashnikov [AK-47] rifles one day as there was information of possible attack in the camp where they were staying.

Long after this incident, there is a record that Laden in February 1998 came up with a coalition of Islamic militants named “International Islamic Front for Jihad against the Jews and Crusaders” to fight against the US. The five coalition founders, including a Bangladeshi militant leader and Zawahiri, were signatories of a statement issued by the Islamic Front in February 1998.

Al-Qaeda was a member organisation of the Islamic Front and Laden was one of the five signatories in favour of his own organisation al-Qaeda. Zawahiri was another signatory of the statement on behalf of Jihad Group in Egypt. Zawahiri was Ameer (chief) of this group. The other signatories were Abu-Yasir Rifa’i Ahmad Taha of Egyptian Islamic Group; Shaykh Mir Hamzah, secretary of the Jamiat-ul-Ulema-e-Pakistan; and Fazl ur Rahman, Ameer of the Jihad Movement in Bangladesh.

It was always difficult to trace Fazl ur Rahman for more than a decade as none among the militants in the network could give his whereabouts. However, some unconfirmed sources said he used to live in Pakistan.

Yet, the initiative of forming the Islamic Front and the role of Bangladesh’s Fazlur Rahman as a founder made it clear that the Bangladeshi militants have long been involved with al-Qaeda to implement their global agenda of Jihad.

Journalist Shahriar Kabir, who conducted extensive research on this issue and made several documentaries, said: “Bangladesh was a part of al-Qaeda’s global Jihadi terrorist network.”

In one documentary tiled “The Ultimate Jihad,” he cited Fazl ur Rahman’s role in the formation of World Islamic Front along with other likeminded groups in different countries. Fazl ur Rahman was playing the leading role for implementing similar Jihadi agenda in Bangladesh.

Mufti Izhar ul Islam Chowdhury, founding principal of Jamiat ul Ulum Al Islamia Madrasa – otherwise known as Lalkhan Bazar Madrasa in Chittagong – also played a significant role in spreading the network of radical outfit Huji across the country since the early 1990s with the ultimate goal of launching a jihad.

Mufti Izhar, aged around 70, is one of the senior leaders in the Islamist parties in the country. He is the Ameer of a faction of the Islami Oikya Jote (IOJ) and also the chairman of a faction of Nezam-e-Islam.

He and his madrasa have close ties with the fundamentalist Islamist outfit Hefazat-e-Islam of which he is a Nayeb Ameer (vice-president).

The Dhaka Tribune published a report on October 8 last year, following blasts inside the madrasa that killed three people who were reportedly making hand grenades there, about his link with Huji and al-Qaeda.

Sources in the militant network confirmed that Mufti Izhar had very close links with Laden and Mollah Omar of al-Qaeda. He had travelled to Afghanistan on several occasions and met Laden, Omar and many other Taliban leaders.

Security analyst Maj Gen (retd) Abdur Rashid, who closely follows Islamist militancy and terrorism issues, told the Dhaka Tribune that Zawahiri’s audio message had not been surprising for him as he was aware of the connections of local militants with the international militant and terrorist groups.

“This is nothing new that Bangladesh’s militants have link with al-Qaeda and other foreign militant outfits,” he said. “Al-Qaeda was founded in a bordering area of Afghanistan and Pakistan in 1988.

“Many Bangladeshi militants went to Afghanistan to fight with the Mujahideens there and they met the leaders of al-Qaeda and many other foreign militant and terrorist organisations,” he said.

“When the Bangladeshi militants returned home from Afghanistan, they came back along with their acquaintances with those militant and terrorist leaders,” the former army personnel observed.

He said later many Bangladeshi militants had visited or revisited Afghanistan through Pakistan and they maintained the links established earlier. The communication between them became easier with the availability of internet.

Rashid thinks that though al-Qaeda gradually has become weak, the local small militant groups are trying to reinforce in line with the ideology of al-Qaeda. “They are inspired to carry out violent activities when an al-Qaeda leader spreads this type of audio message asking them to wage Jihad.”

Last year, the Detective Branch of Police arrested some members of a militant group known as “Ansarullah Bangla Team” and investigators found that they were inspired by Anwar al-Awlaki, the “spiritual leader” of al-Qaeda in the Arabian Peninsula.

Laden and Awlaki both were killed in separate US attacks.

Muhammad Jasimuddin Rahmania, inspired by Awlaki, has been building radical Islamist networks in the country for at least six years. Jasimuddin was not a follower of Laden; rather he preferred to follow Awlaki, a US-born Yemeni who was killed in his country in a US drone attack on September 30, 2011.

Shahriar Kabir does not see the issue of authenticity of Zawahiri’s audio message as important at all. “The important thing is whether the Bangladeshi militants are in the network of al-Qaeda or not, whether Hefazat-e-Islam, Jamaat-e-Islam and other Islamist parties have links with al-Qaeda.

“There are plenty of journalistic reports in the last 15 years on how these local organisations are linked with al-Qaeda and other international terrorist and militants group,” he said.

Meanwhile, after Hefazat’s statement on Saturday denying any link with the audio message, BNP’s ally Jamaat also issued a statement yesterday which said: “We have no knowledge about having any relation of Bangladesh’s Alem [Islamic scholars] community and mainstream Islamic parties with al-Qaeda.”

Jamaat’s acting secretary general Shafiq ur Rahman issued the statement where the party expressed concern over Zawahiri’s audio message. It said the party was also wondering whether it was a new conspiracy against country’s independence, sovereignty and Islam.

The statement claimed that Jamaat and its students’ organisation Islami Chhatra Shibir did not have any involvement with terrorism, militancy and unruly activities.

Zawahiri’s audio message did not mention name of Jamaat and Hefazat. But some parts of the message give an idea that he was talking against the trial of some top Jamaat leaders who are in jail and facing war crimes charges while some of them have already been sentenced for crimes against humanity during the 1971 Liberation War.

Similarly, the audio gives a sense that al-Qaeda leader was talking about the propaganda of killing thousands of people after Hefazat’s rally at Motijheel on May 5 last year.

Though the government agencies are checking authenticity of the clip, published in a website named “Jihadology” on January 14, Shahriar Kabir said an US think tank named “The Jamestown Foundation” reported about it on January 23 with a title “Al-Qaeda Leader al-Zawahiri Urges Jihad against the Anti-Islamic Government of Bangladesh.” He said: It indicates that it was in their hands before coming to our knowledge.”