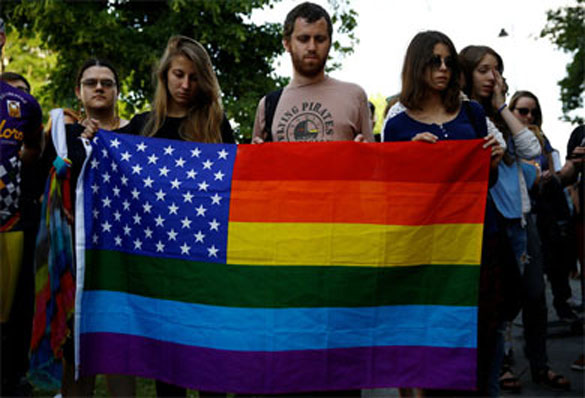 People held an American flag in rainbow colours on Monday in front of the United States Embassy in Warsaw. Credit Kacper Pempel/Reuters

By Monday morning, the grim, if now familiar, global ritual had begun. Leaders across Europe, Asia and elsewhere sent messages of sympathy and outrage. Editorialists opined against extremism and violence. Symbolic gestures — another special lighting of the Eiffel Tower — were announced. Solidarity hashtags circled the virtual globe.

The Orlando attack now ranks as the deadliest mass shooting in United States history. And the horrific slaughter early Sunday at a gay nightclub has a uniquely American component, again demonstrating an easy access to assault weapons that stupefies much of the rest of the world.

But judging from the initial reaction, the attack in Florida resonated globally on Monday not as an American anomaly, but because it felt so universal. Orlando now takes a place with Paris, Brussels, Beirut, Bamako, San Bernardino and other cities struck by different incarnations of terrorism in recent years. Candles were once lit in their honour, too.

A candlelight vigil on Monday for the victims of the mass shooting at an Orlando, Fla., nightclub in Seoul, South Korea. Credit Kim Hong-Ji/Reuters

The Orlando attack is already stirring debate on some of the most visceral fault lines of American politics: terrorism and Islamophobia, security and civil liberties, gun control and gay rights. But absent guns, those issues also resonate across the world, especially in many developed countries wrestling with how to maintain their freedoms in the face of violent attacks on their values.

In an interconnected world, what seemed most relevant was what bound together the satirists of Charlie Hebdo, the rock music fans at the Bataclan, the tourists at the Brussels airport and the young people dancing early Sunday at the Pulse nightclub in Orlando — not what divided them and their societies.

But that connectedness also meant that Orlando quickly became politicized globally as well as in the United States. One organization campaigning for Britain to leave the European Union in the June 23 national referendum posted a campaign message on Twitter that showed Islamic State fighters warning of an “Orlando-style atrocity” if Britain remained in the European bloc. The group deleted the message after the person who posted it was widely condemned.

For many gays, lesbians and transgender people, the Orlando attack was a searing moment, highlighting the continued threats they face from an ideologically varied array of sources even as much of the world grows more inclusive about sexuality.

In London, Owen Jones, a liberal columnist who is gay, walked off the set of a Sky News program after arguing with the host on how the Orlando attack should be defined. Mr. Jones argued it was both a terrorist attack and an anti-gay hate crime, while the program’s host sought to make a distinction between the two.

“This guy, however he dresses up his bigotry and hatred, is someone who hates gays,” Mr. Jones said of the killer. “If he went into a synagogue and killed innocent Jewish people, as people have done, disgusting anti-Semitic terrorists, we’d call it out for what it is.

“This was a homophobic hate crime as well as terrorism.”

The day before the Orlando attack, thousands of people took part in gay pride parades in Croatia and Poland amid concerns about rising right-wing political trends. In Brazil, a spate of killings of gay and transgender people has started an intense debate, with some Brazilians arguing that the rising clout of evangelical Christian legislators is increasing intolerance in the country.

“These killings in Orlando were motivated by the most sordid homophobia,” said Jean Wyllys, an openly gay congressman from Rio de Janeiro.

“This could have happened to any of us, to me, to a friend, a work colleague, a neighbour, a cousin. They could be dead if they had been in Orlando enjoying themselves at a club without harming anyone else.”

Europe’s mainstream political leaders were quick to offer condolences on Monday and affirm their friendship with the American people. Chancellor Angela Merkel of Germany condemned “such a murderous attack” and declared a determination to “continue our open, tolerant life.”

Tel Aviv’s City Hall was bathed in the colours of the rainbow and the American flag on Sunday night. The town hall in Sydney, Australia, was lit in pink. In Britain, the cities of Blackpool and Liverpool said they would light local landmarks with rainbow colours on Monday night in memory of the victims.

Even so, the Orlando killings come as far-right political parties in Europe are stoking anti-immigrant, anti-Muslim sentiments in a similar vein to Donald J. Trump, the presumptive Republican presidential nominee in the United States. As Mr. Trump quickly seized on the massacre to renew his call to view Muslim immigrants as a threat, some politicians in the European right did the same.

Hungary’s right-wing government has been in the vanguard on resisting migrants, and championing a so-called illiberal democracy. On Monday, Lajos Kosa, the parliamentary leader of the governing party, invoked the Orlando attacks as a cudgel to repeat the party’s campaign against migrants from Syria and other Muslim nations.

“Uncontrolled migration, forced resettlement, the inflow of crowds into European society who not only cannot but do not want to integrate come with enormous dangers,” Mr. Kosa told a plenary session of the Hungarian Parliament on Monday.

In recent years, as Europe has struggled to respond to Islamist terrorism, security in the United States was regarded as more efficient and better organized. Europe’s national security agencies were poorly coordinated and blamed for failing to root out cells of home-grown Islamist terrorists, especially in France and Belgium.

Now, after the attacks in Orlando and San Bernardino, Calif., the United States also seems likely to confront difficult questions about the government’s ability to track and stop determined killers, especially those who operate largely on their own, drawing inspiration but not practical support from groups like the Islamic State. The questions are likely to be especially pointed for the F.B.I., given that it had twice investigated the Orlando killer, Omar Mateen, for possible terrorist ties.

For years, America’s liberal gun laws, and the unwillingness of Congress to change them, have mystified people in many other countries.

In Japan, the American gun issue is treated as a bizarre aberration, and much of the news media coverage of the Orlando killings focused on the terrorism angle. Only one person was killed by a gun last year in Japan, according to the National Police Agency, and there were only eight reported incidents of a gun being fired.

In China, news of the Orlando shooting came only hours after a man set off primitive explosives in the check-in area at an airport in Shanghai. Four people were slightly injured, showing the gulf between the two countries in the lethality of the weapons available to the public. In China, where ordinary citizens have no access to firearms, the weapon of choice is often a large kitchen knife.

More than 300,000 Chinese students are studying at American universities, and the Orlando shooting brought on new concerns from Chinese parents. Gao Junlian, a lawyer from south-western China’s Sichuan Province, was concerned about her daughter, a third-year chemistry student at the University of Minnesota. Her daughter was at the Shanghai airport when the explosives were detonated there, waiting to catch a flight to the United States.

“I think the American government should tighten its gun control,” Ms. Gao said by telephone. “Yes, it is a free society for people with all religions and beliefs, but not everyone is capable of controlling their behaviour, and the government’s lax regulation is making killing a lot easier.”