Ultra-conservative Muslim clerics are condemning football as a Jewish and Christian tool to undermine Islamic culture, as millions of Muslims across the globe tune in to watch the World Cup in Brazil. 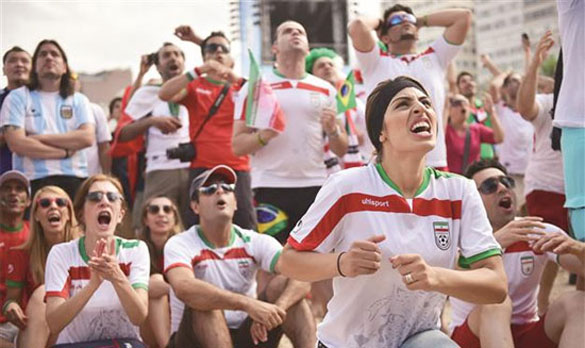 A group of Iranian fans watch their national team’s World Cup match against Argentina in a fan zone at the Copacabana Beach in Rio, Brazil. The World Cup has reignited a debate on the Muslim world’s relationship with ‘the beautiful game.’ AFP photo

The condemnations revive a long-standing debate among conservatives as well as militants about the rectitude of the world’s most popular sport. They constitute one side of a divide among jihadis and Salafis, arch-conservatives who seek to emulate to the degree possible 7th century Muslim life at the time of the Prophet Muhammad and his immediate successors. On the other side of the divide are some of the world’s most prominent jihadist and militant Islamist leaders, including the late Osama Bin Laden, Hamas’ Gaza leader Ismail Haniyeh and Hezbollah chief sheikh Hassan Nasrallah, who are avid football fans. The latter often recognize the sport’s bonding and recruitment qualities. The Islamic State of Iraq and the Levant (ISIL), the jihadist group currently making advances in Iraq, earlier this year used football as a recruitment tool.

Saudi Sheikh Abdel Rahman al-Barrak warned in a fatwa that football “played according to [accepted international rules] has caused Muslims to adopt some of the customs of the enemies of Islam, who are [preoccupied with] games and frivolity.”

Sheikh al-Barrak is believed be close to the kingdom’s rulers, despite having been praised by Mr. Bin Laden in 1994 for opposing then Grand Mufti Sheikh Abdelaziz bin Baz’s endorsement of peace with Israel.

The cleric issued his fatwa in response to a reader of his website on how the faithful should view fans who admire foreign players. He cautioned that football was responsible for multiple “abominable and corrupt acts,” such as befriending and admiring infidels, fandom which sparks hostility between fans of different teams, cursing, profiteering and insulting others when one’s team wins.

“In light of all this, liking and glorifying football is tantamount to engaging in a public abomination and encouraging it. It distracts sectors of society – men and women, young and old – from important matters, both religious and non-religious, and busies them with trivial matters that do not benefit the nation but only lead to a waste of energy and time. This means that it is forbidden to praise or glorify infidel players,” Sheikh al-Barrak ruled.

The cleric had earlier described football as “the mother of all crimes” because it was a waste of money and sparked “unwarranted displays of joy.”

His views echo opinions of other militant clerics such as Sheikh Suleiman al-Alwan, a Saudi cleric nicknamed “al Qaeda’s mufti,” who is currently serving a 15-year prison sentence for endorsing suicide attacks.

“Football is a Masonic game meant to distance Muslims from their religion and faith, and most of those who follow it are loyal to the infidels … A man who watches a game, God forbid, is watching deviant criminals and sinful infidels, even if they are Muslims,” Sheikh al-Alwan argued in a fatwa two years ago. He also warned that refereeing posed a serious problem because it implemented man-made rules rather than God’s law.

While Sheikh al-Alwan sees the game as a Masonic plot, Sheikh al-Barrak and others, including Kuwaiti Sheikh Abdel Muhsin al-Mutairi, argue that the beautiful game is a Jewish conspiracy aimed at distracting Muslims from their faith. Sheikh al-Barrak last year condemned Muslim governments for investing in football and wanting to host mega events like the World Cup, a swipe at both his own government and Qatar, the host of the 2022 tournament.

Sheikh al-Mutairi warned late last year that the Jews had been “successful in preoccupying the Muslim youth with the most inane matters,” in accordance with The Protocols of the Elders of Zion, a 19th century anti-Semitic plot detailing an alleged Jewish plot to control the world.

He quoted the long-debunked tract as saying: “In order to keep the masses in the dark, oblivious to what is being planned for them, we will exert efforts to distract their attention, by creating means of entertainment and diversion, amusing games, and all kinds of sports, as well as things that feed one’s desires. Then, we will make the newspapers promote artistic and sports competitions.”

Sheikh al-Alwan charged that “the Jews, the Christians, and their hypocritical, mercenary lackeys have invested great efforts in cutting the nation off from its glorious history. They want Muslim youths to fumble about in the darkness of Western culture, which is promoted by the sinful media.”

However, jihadist and Salafi proponents of football recognize that it can bring recruits into the fold, encourage camaraderie and reinforce militancy among those who have already joined.

ISIL published a video earlier this year suggesting that an apparent Portuguese fighter in Syria was actually a former French international who had played for Premier League club Arsenal.

The video exploited the physical likeness of a masked jihadist fighter, believed to be Celso Rodrigues Da Costa, to that of French international Lassana Diarra. Voice analysis, however, suggested that the man in the video brandishing an AK-47 weapon was indeed Mr. Da Costa, a Portuguese national who had lived in East London and may have attended youth coaching sessions at Arsenal. Mr. Diarra played for Arsenal before Lokomotiv Moscow.

A caption under the video posted on FiSyria.com, a website associated with ISIS, read, “A former football player - Arsenal of London - who left everything for jihad.” Another caption read, “He (...) played for Arsenal in London and left football, money and the European way of life to follow the path of Allah.”