Extreme Wahhabism on Display in Shrine Destruction in Mosul

On July 24, as reported by media around the world including the London Guardian, members of the so-called "Islamic State of Iraq and Syria" (ISIS), which now calls itself simply the "Islamic State," blew up the tomb and shrine of the prophet Jonah in Mosul.

Iraq's second-biggest city, Mosul has been occupied by ISIS since the first week of June. Muslim believers were ordered to leave the shrine before it was destroyed. 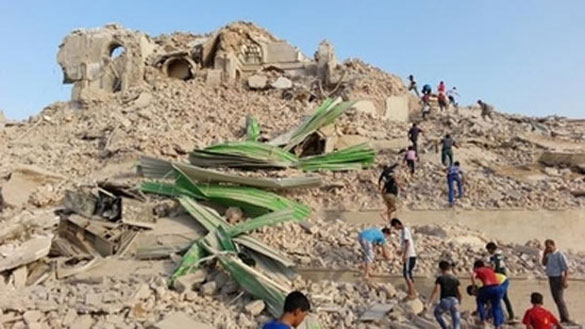 The wreckage of the destroyed Shrine of Jonah, in Mosul, Iraq

Jonah, known as Yonah in Judaism and Yunus in Islam, is a significant figure in the theologies of all three Abrahamic religions. The Shrine of Jonah was erected at an archaeological site believed to date from the eighth century B.C.E. [Before Common Era]. 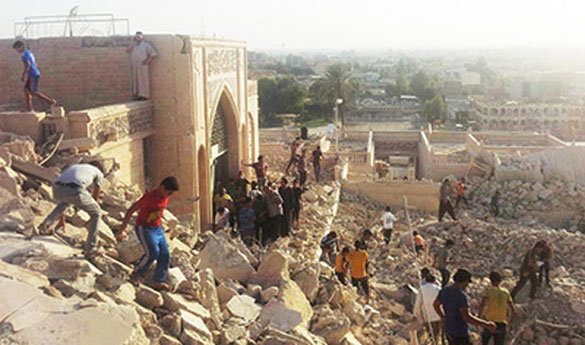 Another view of the wreckage of the destroyed Shrine of Jonah, in Mosul, Iraq

The previous day, ISIS had leveled the thirteenth century mosque of Imam Yahya Abu al-Qassim, just west of Mosul, according to the website Iraqi News.

After these two acts of brutal ruination, the next day, July 25, as described by the Arab television news channel Al-Arabiya, ISIS demolished the shrine of prophet Seth, the third son of Adam and Eve according to all three monotheistic traditions.

ISIS next obliterated the 14th century shrine of prophet Jirjis – St. George to Christians. St. George is identified by Sufis with "Al-Khidr," a mysterious individual who, in Islam, briefly accompanied Moses [the prophet Musa].

This week of devastation was broken on July 26, when ISIS prepared to pulverize the Hadba minaret – known as the "Crooked" or "Hunchbacked" minaret because it leans – at the 12th century Great Mosque of Al-Nuri in Mosul. The Washington Post stated that local residents turned out to protect the structure, and that the members of ISIS were turned away – at least temporarily.

The wrecking of Mosul's Islamic architectural legacy – along with threats to its Christian population, which have caused a mass flight from the city – has been discussed in global media in vague terms. The public is told that ISIS has targeted the heritage of Mosul out of fear that mosques and shrines may be used for "idolatry" or "polytheism" (shirk in Islamic vocabulary). Why that should be is left unexplained. These extremists imagine that buildings might become objects of worship, like idols, instead of all devotion going solely to Allah.

Reporters and commentators appear unwilling to name the ideology of ISIS for what it is: an unchecked outburst of extreme Wahhabism. ISIS is described, without nuance, as "Sunni." Yet Sunni theologians in the Ottoman Empire and India denounced Wahhabism as a form of apostasy for its accusations that Sunni Sufi Muslims are allegedly "apostates." Paradoxically, that is, the accusers of apostasy were declared to be apostates.

Wahhabis continually claim that Shias have abandoned Islam because they pray at shrines, celebrate the birthday of Muhammad, and visit sites in Mecca associated with the prophet – all long-established Muslim practices. Prayer at shrines and requests for blessings from the spirits of prophets and Muslim saints, male and female is not idolatry. It is simply prayer in a spiritual setting.

Wahhabis have long been known for a pattern of vandalism. They justify ravaging tombs, shrines, decorated mosques, and other structures by their absurd claim that prayer within them is prohibited in Islam.

Having formed a family alliance with a clan of marauders in Nejd, the Al-Saud, roaming Wahhabis looted the shrine of Imam Hussein, the grandson of Muhammad, in Karbala in Iraq during raids at the beginning of the 19th century. They then seized Mecca and Medina for the first time and destroyed shrines and tombs there, but were expelled from the main Muslim holy cities by the Ottomans in 1812-13.

The Saudis and Wahhabis re-conquered Mecca and Medina in 1924-25. They eradicated the two most sacred cemeteries, Jannat al-Baqi, where the immediate family of Muhammad was buried in Medina, and Jannat al-Mualla, which held the remains of other relatives and companions of the prophet.

Within Mecca, the Wahhabi clergy, established in authority by the Saudis, have sought to prevent Muslim pilgrims during the annual hajj visit or in umra (limited pilgrimage which may be undertaken at any time of year) from praying at the houses where Muhammad was born and where he lived with his first wife, Khadijah.

In Iraq, a major Shia shrine, the 10th century Al-Askari mosque, was bombed twice, in 2006 and 2007, when the so-called "Islamic State of Iraq," the predecessor of ISIS, first appeared. The Al-Askari mosque, which was reopened in 2009, is now targeted once more by ISIS.

Elsewhere in the Muslim world, from the Balkans to the Far East, Wahhabis have assaulted and despoiled Sufi and Shia monuments.

In Pakistan, numerous bombings have expunged shrines and killed those attending ceremonies within them. During the failed "Arab Spring," Wahhabis appeared in Egypt, Libya, Tunisia, and Morocco, where they smashed tombs, shrines, and other cultural treasures. Similar crimes were carried out at Timbuktu in Mali.

The city of Mosul also is home to the remnants of ancient Nineveh, where, according to Jewish, Christian, and Muslim tradition, Jonah/Yunus was commanded by the Creator to warn the people against the evil and oppression there. Jonah fled God's order and took a ship toward the other end of the Mediterranean. But a storm came up and caused the other sailors to throw Jonah into the sea, where he was swallowed by a "great fish" (a whale, in popular Christian teaching).

Jonah remained in the whale for three days, but was then freed from the whale's belly after he repented and declared his willingness to submit to divine will. He went to Nineveh and cautioned the people there that without a similar expression of contrition for their sins, their city would be wiped out by God. The people of Nineveh complied, and were saved.

What is important about the story of Jonah is that rather than acting to prevent the spread of ISIS into Iraq, and rather than recognizing and naming the Wahhabi radicalism that inspires ISIS, governments and media across the globe have blamed the ISIS eruption on local Iraqi politics and described it as a product of a nebulous "Sunnism." Both governments and the media flee from their responsibility to name the terrorists and identify their aggressive beliefs.

It is time for Muslims and non-Muslims alike to come out of hiding, to recognize their understandable mistakes in dealing with radical Islam, and to join and encourage the courageous people of Mosul who have begun to resist the ISIS terror. When the mosque and shrine of Jonah/Yunus are rebuilt – as they must be – they will have even greater significance.