The goal of Operation Protective Edge is to restore the calm; the means: killing civilians. The slogan of the Mafia has become official Israeli policy. Israel sincerely believes that if it kills hundreds of Palestinians in the Gaza Strip, quiet will reign. It is pointless to destroy the weapons stores of Hamas, which has already proved capable of rearmament. Bringing down the Hamas government is an unrealistic (and illegitimate) goal, one that Israel does not want: It is aware that the alternative could be much worse. That leaves only one possible purpose for the military operation: death to Arabs, accompanied by the cheering of the masses. 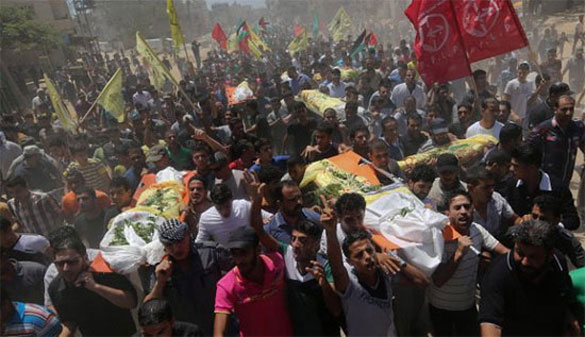 The Israel Defense Forces already has a “map of pain,” a diabolical invention that has replaced the no less diabolical “bank of targets,” and that map is spreading at a sickening pace. Watch Al Jazeera English, a balanced and professional television channel (unlike its Arabic sister station), and see the extent of its success. You won’t see it in Israel’s “open” broadcast studios, which as usual are only open to the Israeli victim, but on Al Jazeera you will see the whole truth, and perhaps you will even be shocked.

The bodies in Gaza are piling up, the desperate, constantly updated tabulation of mass killing that Israel boasts of, which already numbers dozens of civilians, including 24 children as of noon on Saturday; hundreds of people injured, in addition to horror and destruction. One school and one hospital have already been bombed. The aim is to strike homes, and no amount of justification can help: It’s a war crime, even if the IDF calls them “command-and-control centres” or “conference rooms.” Granted, there are strikes that are much more brutal than Israel’s, but in this war, which is nothing other than mutual attacks on civilians — the elephant against the fly — there aren’t even any refugees. In contrast to Syria and Iraq, in the Gaza Strip the inhabitants do not have the luxury of fleeing for their lives. In a cage, there’s nowhere to run.

Since the first Lebanon war, more than 30 years ago, the killing of Arabs has become Israel’s primary strategic instrument. The IDF doesn’t wage war against armies, and its main target is civilian populations. Arabs are born only to kill and to be killed, as everyone knows. They have no other goal in life, and Israel kills them.

One must, of course, be outraged by the modus operandi of Hamas: Not only does it aim its rockets at civilian population centres in Israel, not only does it position itself within population centres — it may not have an alternative, given the crowded conditions in the Strip — but it also leaves the Gazan civilian population vulnerable to Israel’s brutal attacks, without seeing to a single siren, shelter or protected space. That is criminal. But the barrages of the Israel Air Force are no less criminal, on account of both the result and the intent: There isn’t a single residential building in the Gaza Strip that is not home to dozens of women and children; the IDF cannot, therefore, claim that it does not mean to hurt innocent civilians. If the recent demolition of the home of a terrorist in the West Bank still stirred a weak protest, now dozens of homes are being destroyed, together with their occupants.

Retired generals and commentators on active duty compete to make the most monstrous proposal: “If we kill their families, that will frighten them,” explained Maj. Gen. (Res.) Oren Shachor, without batting an eyelid. “We must create a situation such that when they come out of their burrows, they won’t recognize Gaza,” others said. Shamelessly, without question — until the next Goldstone investigation.

A war with no goal is among the most despicable of wars; the deliberate targeting of civilians is among the most atrocious of means. Terror now reigns in Israel as well, but it’s unlikely there is a single Israeli who can imagine what it’s like for Gaza’s 1.8 million inhabitants, whose already miserable lives are now totally horrific. The Gaza Strip is not a “hornet’s nest,” it is a province of human desperation. Hamas is not an army, far from it, despite all the fear tactics: If it really did build such a sophisticated network of tunnels there, as is claimed, then why doesn’t it build Tel Aviv’s light rail network, already?

The 1,000-sortie and 1,000 tons of explosives marks have almost been reached, and Israel is waiting for the “victory picture” that has already been achieved: Death to Arabs.