Syed Ahmad Rai Barelvi (1700-1850) is considered one of the early Muslim freedom fighters of India and a great reviver and thinker of Islam in the Indian subcontinent. He is popularly known among the Indo-Pak Islamic clergy and ulema as a “Shaheed” (a martyr of Islam) who led the Mujahideen movement in India. 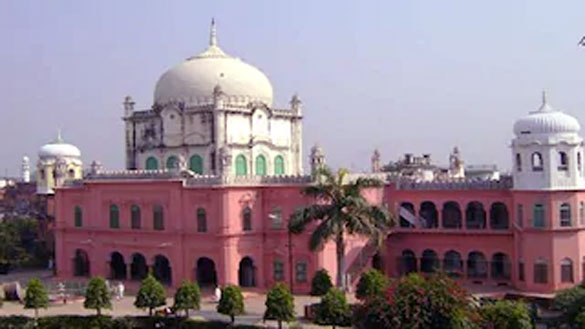 But it is interesting to note that a number of Indian Islamic scholars have recently noted that Maulvi Syed Ahmad 'Shaheed' Rai Barelvi was not a freedom fighter. He was actually the chief exponent of Wahhabism in India, an adherent and fervent advocate of puritanical fundamentalism and physical Jihadism in place of spiritual jihad against the baser instincts and carnal desires (jihad al-Nafs). Interestingly, in the beginning, he was inspired by Sufi orders and silsilahs like Naqshbandiyah, Chishtiyah and Qadriyah. But after he met the Wahhabi patrons in Saudi Arabia during his pilgrimage to Mecca in 1821, he became fascinated by Wahhabism and turned into a puritanical fundamentalist and a jihadist cleric.

The Darul Uloom Deoband. Nearly all adherents of Deobandi and even Ahle Hadisi schools of thought glorify Maulvi Syed Ahmad Rai Barelvi as 'Shaheed' because he was killed while waging the militant jihad against non-Muslims in undivided India

Rai Barelvi’s conversion from Sufism to Wahhabism is patently clear from his own book Sirat e Mustaqeem (straight path) in which he devoted the entire third chapter to Sufism but with the same line of thinking that was laid out in Ibn Abd Al-Wahhab's 'Kitab Al-Tawheed' (book on monotheism). Much in the same way, he declared all mystically inclined Muslims mushrik (polytheists) and all Sufi beliefs and practices as antithetical to the pristine and puritanical Islam and thus called for a radical reform in Sufism. A great many Wahhabi madrasas, in their text books, depict Syed Ahmad Rai Barelvi along with Ismail Dehlvi as the leading religious ideologues and teach their books in their syllabi under the subject of islami aqaid (Islamic beliefs).

Beside his stern attempts to purge Indian Muslims and Islam of the inclusive, pluralistic and composite traditions, the most conspicuous job he did was his tahrik-e-jihad or Mujahidin movement against the Sikhs of Punjab. Noted Islamic historian in India, Sheikh Muhammad Ikram writes about the jihadism of Syed Ahmad Rai Barelvi under a sub-title “Jihad”, in a detailed and descriptive way. He notes: “Having reached his hometown, he [Rai Barelvi] began his full preparation for the jihad against the Sikh community and sent Maulana Ismail Shaheed and Maulana Abdul Hayy across the country to preach the cause of this jihad”… “On 17th January (1826), Maulana left Rai Bareli for his trip to Jihad. At that time, he had 5-7 thousand Indians with him, who were fully prepared for the jihad for the religious freedom of the Muslims in Punjab. They were well-determined to lay down their lives for this cause. Passing through Gawaliyar, Tonk, Ajmer, Marwar, Hyderabad, Sindh, Shikar Pur and Qandhar, the Maulana reached Kabul, from where he ventured into Peshawar via Khaibar”. (Mauj-e-Kausar, by Sheikh Muhammad Ikram, pp. 24-25, published by Adabi Duniya, Matia Mahal, Delhi).

Nearly all adherents of Deobandi and even Ahle Hadisi schools of thought glorify Maulvi Syed Ahmad Rai Barelvi as 'Shaheed' (Islamic martyr), because he was killed, while waging the militant jihad against non-Muslims in the undivided India. This has been persuasively argued in a classical Islamic reference book in Urdu, 'Mauj-e-Kausar, Musalmanon Ki Mazhabi Aur Ilmi Tarikh Ka Daur-e-Jadid', a history text book included in many Deobandi madrassas, written by Sheikh Muhammad Ikram, himself inspired by Syed Ahmad Rai Barelvi.

Throughout his entire life, Maulvi Rai Barelvi continued to be very vigorous and active in his call for Islamic Puritanism in the entire Subcontinent of India, Pakistan and Bangladesh. In fact, he is an apt example of how many Sufi Sunni scholars, who were at some time essentially inclusive because of their adherence to the Sufi orders, drastically changed their worldview and espoused exclusivist religious ideas. More astonishingly, this group of Islamist scholars in India left more active, impacting and prevailing ideology in the subcontinent than even the inclusivist Sufis who had originally introduced Islam to its people. Their adherents are far more energetic and practical than those who make tall claims to uphold the all-embracing cause of Indian Sufi saints.

Apparently, Syed Ahmad’s Mujahidin movement is now an age-old history for Indian Muslims, but many still get influenced by his religious exhortations for jihad as “an act of worship greater than spiritual prayer in merit and rewards”. Therefore, a movement of revival of Rai Barelvi’s Mujahidin movement is on the rails in the subcontinent as proclaimed by a number of extremist jihadist outfits. For instance, in February 2011, the emir of the Jamiat Ulema-e-Islam (JUI-S) party Maulvi Samiul Haq stressed ‘the need for revival of the Mujahidin movement of Syed Ahmed Shaheed Rai Barelvi’ against a religious minority in Pakistan, the Sikh community. Maulvi Samiul Haq argued that “the objectives of the jihad launched by our Islamic leader Syed Ahmed Shaheed against the British rule and the Sikhs in the 19th century have yet to be achieved”.

Similarly, Syed Ahmed Rai Barelvi is often depicted in several Talibani videos as a jihadi role model to the militants of Tahrik-e-Taliban Pakistan. Not only this, even the hardcore doctrines of Rai Barelvi and their poisonous tentacles spread by Shah Ismail Barelvi created huge impact on Muslims in India after the 1857 revolt against the British rule. Countless Islamic seminaries, madrassas, maktabs, mosques, Islamic associations and outfits that were established later in India, fell in the cauldron of the Wahhabi impact.

Given all this, the question arises whether Rai Barelvi’s Mujahidin movement in India was a struggle against British imperialism or a religiously and politically motivated militancy against the Indian Sikh community? The heightened historical and ideological implications of Syed Ahmad Rai Barelvi’s Mujahidin movement caused an intellectual curiosity among the classical Islamic scholars. However, most of them did not study it in an objective and critical manner and, therefore, ended up in a hollow glorification of the so-called “Shaheed” (martyr of Islam). On the other hand, a few of them ventured into a critical analysis of this first jihadist movement in India. A remarkable research work in this direction was produced by a contemporary classical Islamic scholar, Maulana Khushtar Noorani who rendered a complete book to this research question, entitled, “tahreek-e-jihad aur British government: ek tahqeeqi mutala”. The title of this book in Urdu ( تحریک مطالعہ تحقیقی ایک گورنمنٹ:جہاداوربرٹش) can be loosely translated as — The jihad movement and the British government: A research study.

Mr Noorani came up with an entirely different perspective on the Mujahidin movement of Rai Barelvi. Much against the canonical statements and writings of mainstream Islamic historians and scholars of Darul Uloom Nadwa, Deoband and Ahl-e-Hadith, he arrives at the conclusion that Rai Barelvi’s movement was not aimed at challenging the British imperialism; rather it was an armed militancy against the Sikh community of Punjab. He clearly states in this book that Syed Ahmad or his jihadi faction did not contribute to the freedom movement of India at all.

Maulana Noorani’s conclusion came crashing down the consensus of the authoritative Indian Islamic scholars such as the renowned Islamic historian Maulana Ghulam Rasool Mahr, world-renowned Indian Islamic preacher and Arabic scholar Maulana Abul Hasan Ali Nadwi, Maulana Masood Alam Nadwi, Maulvi Syed Muhammad Ali and several others. Maulana Noorani avers that, “Syed Ahmad Rai Barelvi engaged in the armed jihad against the Sikh adherents. He had the support of the hundreds of Mujahideen of India, including various Muslim tribes of Sarhad [border] who came in large numbers to join his movement. They all actively engaged in the jihad led by Syed Ahmad Rai Barelwi with a great zeal and fervour."

Maulana Noorani has enumerated a very interesting story in one place. He wrote that once the close disciples of Syed Ahmad sahib asked him as to why he shifted his attention from his spiritual practices and prayers to the physical jihad. Upon this, Rai Barelvi replied to them with full conviction: "There is no prayer greater than jihad. Therefore, I am fully prepared for the jihad. You too please get ready for that."

According to the Pakistani Studies text book which is taught in Class Nine, Rai Barelvi’s Mujahidin movement was started against the Sikh community. He came to Sindh in 1826 and sought to help Syed Sibghatullah Shah who sent a strong contingent of staunch followers called “Hurs”.

The book continues: “Syed Ahmed Shaheed left his family under the protection of Pir Pagara and proceeded towards Jihad without any worry about his family. He reached Nowshehra after passing through Afghanistan, the Khyber Pass and Peshawar in December 1826 and made it his headquarter. The first battle against the Sikhs was fought on December 21, 1826 near Akora. The Sikhs were defeated. The second battle was fought at Hazro. It was also won by the Muslims. These victories inspired a number of Pathan tribes to join Jihad Movement. The number of Mujahideen rose to 80,000. Syed Ahmed Shaheed Barelvi was given the status of 'Amir-ul-Momineen'. Islamic laws were enforced in the area which was controlled by Syed Ahmed Shaheed Barelvi”.

Ghulam Rasool Dehlvi is a writer and scholar of comparative religion.