A Flow Of 'Neo-Taliban’: Though Diverse Factions Still Exist, Afghan Taliban As A Whole Has Modernized

Although the Taliban include different groups and individuals, many are now asking if we are seeing a flow of “neo-Taliban” away from the organization. 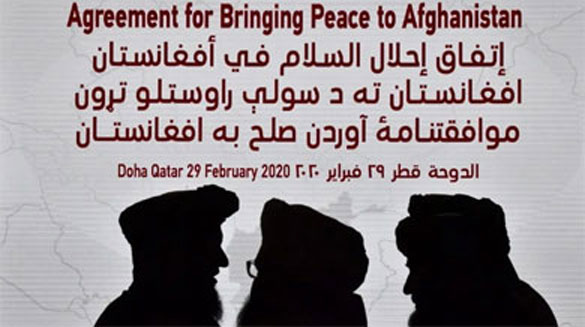 Members of the Taliban delegation ahead of the signing ceremony with the United States in the Qatari capital Doha, on February 29, 2020. Photo: AFP/Giuseppe Cacace

After the death of Taliban leader Mullah Omar, Mullah Akhtar Mohammad Mansour was chosen as the new head. Some prominent members of the Taliban supported his election, and others questioned it. This problem also arose with the succession of Hibatullah Akhundzada as leader after Mansour was killed.

But it seems that with Akhundzada’s leadership, a significant portion of the Taliban’s political decision-makers became more moderate. During this period, although some of the Taliban’s more radical forces joined other movements such as Islamic State (ISIS), the moderate and realistic faction seems to have been able to change the group’s approach, both internally and externally.

Also, a large number of the Taliban’s old members have been killed during the more than two decades of war, and a new generation has arrived. These youths have novel ideas, and the concepts of internal stability and peace versus war are more understandable to them.Nearly three decades of cooperation between the Taliban and extremist groups have led the former to conclude that Afghanistan belongs to the Afghans. In fact, the Taliban have a more moderate framework, seeing jihad as a means for overthrowing the Afghan government and expelling foreign forces, while ISIS and other extremist groups have the idea of dominating the world and establishing an Islamic caliphate.

For example, while in ISIS’ view, Afghanistan is part of a broader region known as Velayat Khorasan, the Taliban have gradually abandoned their transnational views and ideas and are thinking of an Islamic emirate in Afghanistan itself, rather than an Islamic caliphate spanning the region or even the world.

There are also other important differences in religion, the views of minorities, the Islamic Caliphate or the Islamic Emirate, and so on. Therefore, it seems that given the great losses it suffered because of its links to al-Qaeda and Osama bin Laden (overthrow of the Taliban government), the group now does not want Afghanistan to be a battleground between other movements. Therefore, it has separated itself from international terrorist groups.

In this regard, it should be noted that the Taliban have now come to the conclusion that the timing of the withdrawal of foreign troops from Afghanistan is significantly linked to the severance of ties between the Taliban and groups such as al-Qaeda.

Dominance Of The Political Faction

The Taliban can be seen as divided into military and political factions, but during the two decades of conflict with the government and the West, the political faction seems to have overcome the military part.

Tolerance Of Other Afghan Tribes

The Taliban once occupied about 90% of Afghanistan’s territory. They seem to have come to the understanding little by little that any power in Afghanistan that has called for a monopoly has not succeeded, so a widely acceptable government is essential. Therefore, the group tries to introduce itself as an important part of Afghan society, not the whole of it.

In this regard, it seems that the Afghan Taliban intend to correct some of the trends of the past in their relationship with ethnic and religious minorities such as Shiites and Hazaras. In fact, the Taliban (tactically or strategically) have decided to involve the rest of the tribes in the government, and have even tried to recruit members from tribes other than the majority Pashtuns, such as Tajiks, Hazaras and Uzbeks.

For two and a half decades, Pakistan has played a significant role in the positioning of the Afghan Taliban, and many have even linked the Taliban to a structural relationship with Pakistan’s Inter-Services Intelligence. But for the past decade or so, the Afghan Taliban no longer appeared to be a strategic tool for the Pakistani military to advance its security policy toward Afghanistan.

In fact, the Afghan Taliban sometimes have different interests from Pakistan in peace negotiations, such as recognition of the Durand Line and so on. Meanwhile, the Taliban appear to be seeking to define their own interests in Afghanistan’s geography by understanding Pakistan’s national interests.

Afghanistan’s government has been able to help reduce the Taliban’s power and raise internal conflicts within the group by measures such as peace talks and the inclusion of more moderate Taliban members in the government. This has led the Taliban’s middle-class faction to be more inclined to accept change.

Afghanistan’s decades-long understanding of developments inside the country, the lack of official recognition by most countries in the 1990s, and its relationship with regional and Islamic actors and institutions have led the Taliban to conclude that foreign actors are only interested in pursuing their own policies in Afghanistan. On the other hand, foreign actors’ support against ISIS led to talks with actors such as the United States, Russia, China and Iran.

Meanwhile, the Taliban, by resorting to serious diplomacy and real negotiations, are not, as in the past, putting all their eggs in the basket of one particular country, and are therefore trying to be connected with a wide array of nations ranging from East Asia to the West.

For the past two decades, the Taliban have tried to use social media such as Facebook and Twitter to spread messages in several languages and to communicate fia WhatsApp, Viber and Telegram. So the Taliban have often modified their public image and public relations, portraying themselves as a more modern and less radical movement than in the past.

Also, with the widespread social and cultural developments in Afghanistan, the body of the Afghan Taliban has changed, and new media and virtual networks have been somewhat effective in changing their attitudes.

In addition, the Taliban leaders’ increased experience with other Islamic states and the large gap between theory and practice seem to have led them to realize that accepting women’s rights, education, and modern interpretations of human rights in accordance with Islamic principles are essential.

After the Taliban regime was ousted, freedom of expression, freedom of the media, women’s enjoyment of their basic rights, and so on changed the face of Afghanistan as a whole. In the meantime, it must be admitted that the current Taliban are quite different from the extremists and radicals of the 1990s.

In the meantime, however, there has been no fundamental change in the Taliban’s view of various social, political, and cultural issues. But the political section of the Taliban now seems to be dominating the military faction, while at the same time, we see less ideological colour and increasing nationalism in the group. In fact, changes in the Taliban are continuing at various levels.

Farzad RamezaniBonesh is a researcher and analyst of international affairs. He is chief editor of the International Centre for Peace Studies based in Iran and the UK.

Original Headline: The changing approach of the Afghan Taliban