September 11, 2001: Saudi Arabia's Use of Political Islam Has Caused the Spread of the Beast of Terrorism 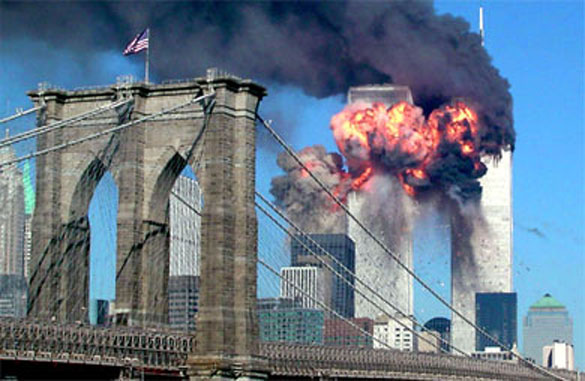 In a series of co-ordinated attacks on the morning of September 11, 2001 the twin towers of the World Trade Center collapsed, claiming the lives of hundreds of innocent civilians in a matter of hours and in a city that enjoys a big part of my memory, New York City.

September 11, 2001 began as another ordinary day in New York before people all over the world held their breath while watching live on screen the stunning and horrific scenes of people hysterically running, screaming, shouting, passing out, and dying. On that day, 2,996 innocent civilians were savagely killed reportedly by some extremists for no reason.

Sadly enough, 15 of the 18 hijackers, who took part in the attacks were Saudis, and the majority of them either grew up in government-supported religious camps in Saudi Arabia, or were Imams (clerics) there. Other nationalities that participated in the attacks include the United Arab Emirates and Egypt. Ironically, they are the same countries blockading my country Qatar now.

As all of us already know, amongst all the Arab countries the mental image of Saudi Arabia is that of the one and only country which is deeply and heavily associated with Islam, given the fact that the two holy cities of Makkah and Madinah are located there. The indication here is not that Islam as a religion promotes such barbaric acts. Rather, it is the Saudi government-based version of Islam that arguably encourages so.

Our one and only catastrophe nowadays is that some countries are maniacally trading in religion to achieve few short-term political goals to serve their internal and foreign policies. The naivety of engaging in such a sensitive ‘business’ does not only lie in the fact that this venture is doomed to boomerang. Rather, it creates a butterfly effect that passively affects not only desperate Muslims all around the world, but also the image of Islam as a heavenly religion.

Saudi Arabia is well-known for its exploitation of political Islam and it has been made evident in many wars, especially in the Arab region; some of the examples are the separation war of Yemen in the 1990s and the wars in Iraq and Syria. The majority of the ISIS fighters were Saudis who were intentionally freed from prisons to join the wars in neighbouring countries.

Riyadh’s immature use of political Islam has caused the spread of the beast of terrorism, and, until now, this beast is out of control. Saudi Arabia is responsible for introducing this beast to Islam, and it is now up to the international community to rein it in. This has to stop.

It is no secret that Saudi Arabia has been actively using selected government-supported Imams to educate and influence young people, passively injecting into their minds the seeds of hatred, malice, grudge and zero-tolerance, while, simultaneously promising them godly rewards. In other words, the role assigned by the government to those Imams was to deceptively recruit ‘Jihadi’ puppets and keep them on standby until further notice.

Although some may argue otherwise, modern 'Jihadism' emerged with the appearance of Al Qaeda in Afghanistan to fight the Soviets in the 1970s . It was initiated by Saudi Arabia with the support of the US spy agency CIA. So far, Riyadh has been a devoted and robust donor and sponsor of the armed group.

The Saudi-government’s Jihadi recruitment has for long been an infamous part and parcel of Riyadh’s foreign policy. It is no secret that Al Qaeda was (is) secretly in touch, if not an affiliate, of Saudi intelligence. In a report published two years ago by Reuters, Zacarias Moussaoui, a former Al Qaeda operative imprisoned for life for his role in the Sept 11 attacks, admitted in a testimony filed in Manhattan federal court that “a list of donors from the late 1990s during Al Qaeda leader Osama bin Laden’s tenure included some 'extremely famous' Saudi officials, including Prince Turki al-Faisal al-Saud, the former Saudi intelligence chief.”

Just recently, The Associated Press (AP) published an investigative report detailing how Saudi Arabia and the UAE managed to cut deals with Al Qaeda commanders in strife-torn Yemen in a cooperative move that shows how close the relationship is between the supposedly ‘enemies,’ i.e., Saudi Arabia and Al Qaeda. Ironically, the report also recounts how hundreds of the groups’ members were recruited to join the Saudi-UAE coalition to fight the war in Yemen.

This lame technique of recruiting Jihadists is enacted in almost every region where Saudi Arabia has a presence. The kingdom’s petro-dollars are what facilitate the said operation. The money could have been positively used, had the kingdom invested it instead in developing its educational infrastructure and in solving the problems of extremism or even in bringing down the terrorism beast Riyadh has created. It is no secret too that Turki al-Dakhil, Saudi General Manager of Al Arabiya News Channel, was also an active advocator for Jihadism in Afghanistan in the 1990s.

In this context, one may question the validity and credibility of Crown Prince Mohamed bin Salman’s gargantuan Vision of 2030 and the reforms which he is reportedly implementing in the kingdom. For this vision, I personally wish unprecedented success and hopefully the reforms led by Prince Mohamed will see light soon.

Each state has its own life-cycle. Talking about the elimination of corruption and handing over the corrupt to justice is a beautiful gesture and a reform initiative. However, is it really the case that Prince Mohamed has been fighting corruption or establishing a more absolute rule where all the power is centralised in his hands?

I strongly support Prince Mohamed-led reforms that have so far created some freedom for activists and granted women the right to drive. Nevertheless, is it reasonable to imprison activists like Israa al-Ghomgham and others, while simultaneously he presents himself as a reformer? Or is it reasonable to imprison writer and entrepreneur Essam al-Zamel for writing about Aramco and the need for economic reforms?

Saudi Arabia is somehow turning against itself in that it has been creating internal enemies for itself on a daily basis. The talk here is about the various crackdowns the kingdom has launched on thinkers, politicians, moderate religious figures and activists like Salman al-Awdah, who has been described by UN experts as a "reformist”.

In my view, the region is still a fertile area for extremists and terrorism, mainly due to the dictators ruling influential countries. Look at Egypt as an example, from where news of killings or bombings is coming out almost on a daily basis. Egypt could have been a perfect example of a Middle Eastern country that was able to democratically elect a president in a transparent manner, had not the petro-dollars of Saudi Arabia and the UAE intervened to literally destroy the dreams of Egyptian youths of having and living in a democratic state.

One may say that Prince Mohamed (MbS) is really trying to reform the kingdom. Still, our merciless reality ponderously negates that. The Saudi version of liberalism and the quick pace of the reforms are creating a serious sense of alienation, let alone the consequent predominant feeling of the lack of hope amongst Saudi youth. Undoubtedly, this warns of grave consequences the kingdom may subtly avoid if it engages in logical thinking and good reasoning.

Instead of wasting millions of dollars on imprisoning the youth, princes, activists, Jihadists, wars (in Yemen, Syria, and Iraq) and other terrorism-related areas, Saudi Arabia, along with the UAE, can invest that money in creating jobs, and improving the educational curricula.

Unless Saudi Arabia and the UAE return to the right path, terrorism will continue to thrive. Yet, why would they both choose to continue on the same direction of destroying states and turning countries into failures? Is it their own way to escape internal political reformation? Why would Saudi Arabia insist on representing the divine legitimacy of Islam on earth, exactly as the crusaders used to do during the Middle Ages? This is totally unrealistic and a disconnect.

Against this background, I see the reasons that led to the September 11 attacks are still alive in our region. The immature foreign policies adopted by some countries in the region should stop. Launching wars and using proxies should also stop. Bringing justice to the Palestinian people, ending the wars in Syria, Yemen, and Libya, dissolving proxies, and stopping destabilisation and intervention in the internal affairs of other countries, shall, for sure, end terrorism. Saudi Arabia and the UAE must realise this; otherwise, the beast of terrorism will continue to grow and will totally get out of control.