Recently, the Associated Press added a new word into their influential industry Stylebook. That word? “Islamist”.

According to the AP Stylebook the definition of Islamist is – (A) supporter of government in accord with the laws of Islam. Those who view the Quran as a political model encompass a wide range of Muslims, from mainstream politicians to militants known as Jihadi.”

The word Islamist has been floating around for decades, but it wasn’t until recent years when the word really took off in the public sphere - this boom can obviously be attributed to the Wars on Terror, Iraq, Afghanistan, Pakistan, Libya, Yemen, Somalia, etc. So while the word has been out there on the tongues of the general populace, it wasn’t until now with its inclusion into the AP Stylebook that there is a national validation of the term – and more importantly, its multifaceted use.

The word Islamist has been championed by The Right and their sympathizers for years as a way to both refer to foreign extremists and to discredit domestic intellectuals who stand against their ideology. Using the word against these domestic voices is where Islamist is at its most dangerous, and why its validation by the Associated Press is so disheartening. Recently, Ibrahim Hooper, National Communications Director for the Council on American-Islamic Relations (CAIR), spoke up against the accreditation of this word in his op-ed, blandly entitled ‘Media Urged to Drop the Term ‘Islamist’ In The New Year’ – and as if on cue, the right-wing establishment cried a foul. Immediately they pounced on, saying things like Hooper’s plea was a “War on Words”, or that Hooper’s article was the initiate of a “new word-squelching Jihad”.

Really?! One 489-word opinion piece on some random blog has become the catalyst igniting a global Jihad against the 1st amendment?

So what do proponents of the term want? Why are there such staunch defenders of a word like this? Advocates for the use of the term say they want a word that accurately describes Muslims who strive for a political state governed by the teachings of Islam (or rather the scariest of all words 'Sharia Law'). On the surface that’s well and good, but what these avid proponents and staunch defenders actually want is a word that acts as a slur - with the plausible deniability of not being one.

In Islamist these pundits have a word that may on the surface simply means those who want a more politicized Islam but actually means “Jihadist” “Towel head” “Hajji”. The word makes Islam exists separate from its religious brethren, to paraphrase Hooper, there isn’t a Christianist nor a Judist. Though when we look at the definition of what makes an Islamist an Islamist, why isn’t there? There is a large portion of American politicians who want to govern and create laws through the lens of extremist Christian dogma, whether they are Tea-Partiers, Evangelicals, or recently those who vigorously fight against marriage equality laws. You think the legislators who created the Defence of Marriage Act did so for any other reason other than their religious purview? The same goes for Judaism, what is Religious Zionism if not a politicization of Jewish religious beliefs?

But, thankfully, words like that are not part of the American lexicon, because a word like that – a word like Islamist – doesn’t just exist to simply define a group of people who warp politics through the veil of religious dogma, the word exists as a stealth slur. It is exists as a piece of coded language.

For a potent example of the warped and deformed view of the word Islamist, its multi-pronged usage, and how Muslims in America are perceived in general, one would only need to break the First Rule of The Internet and venture into the prudent tar pit that is The Comment Section.

Twitter collection website Twitchy.com – created by right-wing blogger Michelle Malkin – decided to join in on the conversation started by Hooper’s article, highlighting the Twitter “backlash” it enticed. In their tar pit, this little gem can be found: 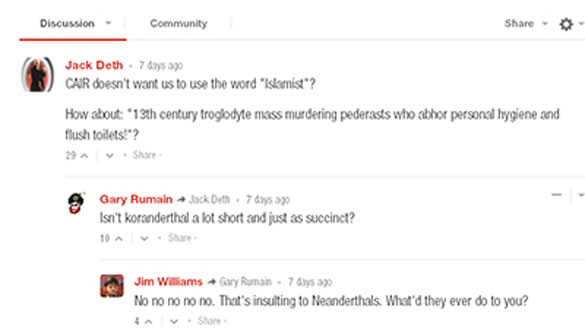 Coded language is unfortunately not a new phenomenon here in America. In fact, since this past presidential election it has almost become common place. Between Mitt Romney’s comments that Palestinian culture is to blame for its economic hardships, to Newt Gingrich calling Obama the “food stamp President”, race-baiting has just become another weapon in the politician’s arsenal. Just as ugly terms like Welfare Queen trigger certain images in the collective brain, so too does Islamist.

Islamist conjures up the image of a bearded paranoid Arab despot, hiding and plotting Western civilization's demise inside the entrails of a cave in Pakistan. And to apply that image to politicians and intellectuals inside and outside “The Muslim World” is a purposed action by pundits that are calculating and counting on a specific collective response that will undermine (and most dangerously) dismiss any other ideology that isn’t their own.

The problem with Hooper’s original article, and that of the discussion that it started, was that they fail to mention that Islamist, as it stands right now, is used as a derogatory term to any Muslim who dares challenge the stances and practices of the American government on a national stage. This is what needs to be changed. The removal of its derogatory use. Not necessarily the omission of a word that describes someone who advocates “Political Islam”.

This isn’t that tough of a goal either. Now more than ever the English language is a malleable ball of Play-Doh that can be morphed and changed at will. It just takes one talking head to introduce a new word into the atmosphere that uses the same definition pundits say Islamist does, then this would no longer be an issue – politicos would still have a term to use for the extremists out there, and those with an agenda against Muslims (specifically Muslims Americans who try to enter the national conversation) will no longer have a weapon to use.

Though, as theoretically easy as that may be, will that happen? Probably not! Language is a powerful tool, and having a word like Islamist – something that simultaneously works to describe a perceived threat, and alienate an undesirable minority of the national community – is too precious a weapon to give up.