By David Zucchino and Najim Rahim

In one of the oldest districts of the ancient city of Herat, religious vigilantes loyal to a local cleric patrol the streets, routinely detaining and interrogating couples they suspect are unmarried. 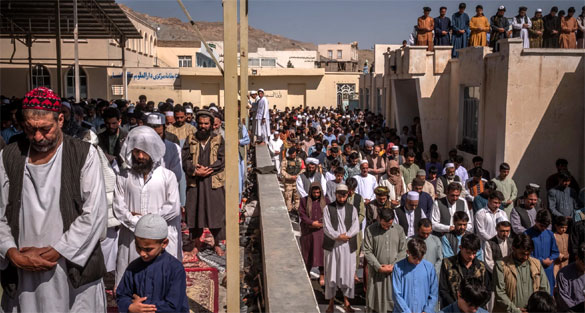 Then the vigilantes take the suspects to the cleric’s tribunals that enforce his interpretation of Shariah law, which forbids public contact between a single woman and an unrelated male. The penalty for violators: the man is whipped or clubbed, and the woman is returned to male relatives for likely punishment.

The cleric, Maulvi Mujib Rahman Ansari, has also posted billboards declaring that any man whose wife does not completely cover herself in public is a coward. And he has banned music and concerts, while also declaring that Covid-19 was sent by God to punish non-Muslims.

Maulvi Ansari, 36, a burly, bearded cleric, has carved out his own fief in a conservative district of Herat, a western Afghanistan city renowned for art and culture. Residents say his enforcers have seized control of the district from the police, who rarely interfere with their vigorous enforcement of strict Shariah law.

Though he says he is not affiliated with the Taliban, Maulvi Ansari’s edicts are an echo of that movement’s harsh Islamic codes — and perhaps a portent of what could come as the insurgency negotiates a power-sharing deal with the government. 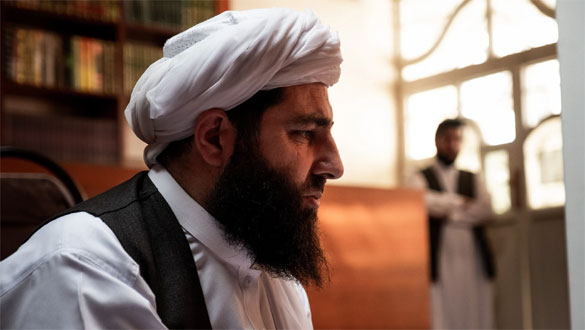 Maulvi Ansari at his religious school.

Maulvi Ansari’s tactics have alarmed women’s rights advocates and put the provincial government on the defensive. And Islamic scholars say he is just the vanguard of a rising tide of extremist clerics who have galvanized public resistance to the often corrupt and ineffective American-backed Afghan government — yet another way the government is coming under dire pressure outside the Taliban’s insurgency.

In his slice of Herat, Maulvi Ansari has resurrected perhaps the most despised relic of Taliban rule during the late 1990s: the Ministry for the Promotion of Virtue and Prevention of Vice, which brutally enforced Shariah law.

In the mullah’s neighborhood of Gozargah, his enforcers wear white tunics adorned with the crossed-swords logo of his religious movement. They intercept couples in cars, on motorcycles and on the street, questioning them separately and sometimes demanding a marriage certificate. Married couples have been threatened because they didn’t have a certificate on hand.

In a sermon last year, Maulvi Ansari suggested chopping off the hands of thieves and stoning accused adulterers. He bars women from his news conferences. He has cowed the local government with his music ban, though officials did take down his billboards.

“He is creating a lot of fear in the community,” said Suraya Pakzad, a prominent women’s rights activist in Herat. She said the tactics evoked painful memories of Taliban rule, when she ran an underground school for girls. 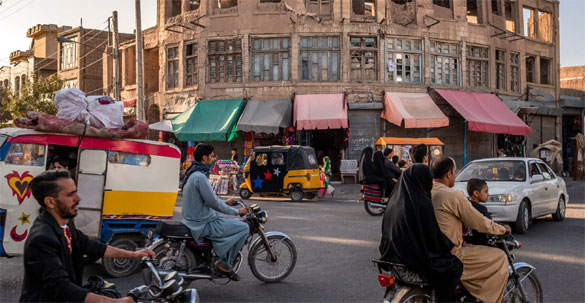 Maulvi Ansari’s followers have taken to stopping couples on the street to demand proof that they are married.

“They are there to keep anyone from enjoying life,” she said.

Another activist, Fatima Farahi, said she was afraid to let her daughter leave the house. “The government should prevent this sort of extremism,” she said.

Herat’s provincial governor, Abdul Wahid Qatali, acknowledged that Maulvi Ansari had tapped into public resentment of the government. But he said most followers were uneducated villagers drawn by the mullah’s conservative religious and cultural populism.

Maulvi Ansari — Maulvi is a title meaning Islamic scholar — is venerated by many followers as a descendant of a revered 11th-century Muslim Sufi saint, Abdullah Ansari of Herat, whose tomb is near the cleric’s mosque.

“Whatever he says at Friday Prayer, we can deal with,” Governor Qatali said inside his heavily guarded compound. “He’s not taking weapons against the government. But our red line is that we won’t let him panic our people and our women.”

On a recent Friday, buses crammed with men and boys lumbered up to a city mosque, where thousands of people queued under a punishing sun to submit to body searches. The mullah’s voice boomed over loudspeakers, echoing off the mosque walls and reaching worshipers praying in walkways and gardens well beyond the mosque. 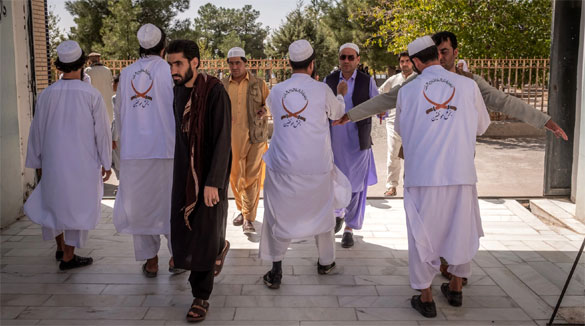 Mullah Ansari's enforcers wear the crossed-swords symbol that his religious movement has adopted.

The next day, Maulvi Ansari gave an interview to The New York Times, sitting cross-legged on the library floor of the school at his mosque and condemning the Afghanistan government as un-Islamic and unworthy of allegiance. His radio station and Facebook and Instagram accounts help spread that message even though he has condemned certain secular TV programs and social media platforms as “shameful” and un-Islamic.

Maulvi Ansari boasted that his mosque tribunals had punished more than 100 people accused of violating Shariah law since the patrols began in December. He said detained men had been held briefly in a makeshift jail while a religious committee determined punishment.

“If the government did its job properly, we would be its servants,” he said. “But it doesn’t, so we have the responsibility to stand on our own feet.”

Told that many women in Herat feared his harsh tactics, he said that only “impure and immoral” women felt threatened. Women of virtue and chastity obey his strictures to cover their bodies and hair, he said.

“There is no justice in the Afghanistan system, so we must provide justice,” Maulvi Ansari said. Even with the old Taliban government long gone and after 19 years of occupation by foreign troops, “the people still want Islamic government with Shariah law,” he said.

The local government does not dare confront him, he said, because many officials and police officers agree with his teachings; some officers were seen praying at this mosque.

Asked about the peace talks going on with the Taliban, Maulvi Ansari said he would support any government based on Shariah law, whether or not it included the Taliban.

But he said he condemned Taliban suicide attacks and maintained no militia himself — only bodyguards who carry assault rifles and have government-issued weapon permits. He approves of girls attending schools and universities, he said, but separately from male students. 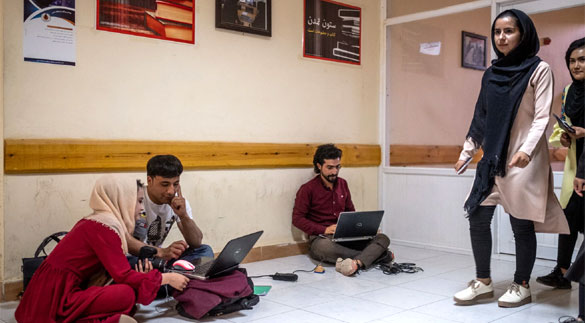 Journalism students at their campus in Herat University.

At Friday Prayer, Najibullah Sari, 24, a university student, said he supported the cleric because “bad people must be stopped when society is headed toward corruption.”

Ahmad Huzaif Noorzaie, 22, who directs one of Maulvi Ansari’s checkpoints, said he and his colleagues separate men and women seen traveling together in the Gozargah neighborhood.

“We question them to see if their answers are the same,” he said. “If not, they face punishment.”

Tariq Nabi, a prominent Islamic scholar, said Maulvi Ansari had created a worrisome parallel government based on the ultraconservative Wahhabi interpretation of Islam learned during his studies in Saudi Arabia. He said other extremist clerics have imposed similar versions of Shariah law in other Afghan provinces.

On his TV broadcasts, Mr. Nabi has challenged Maulvi Ansari’s call for Muslims to attend mosques despite Covid-19 risks, telling listeners to avoid crowds, including at mosques. 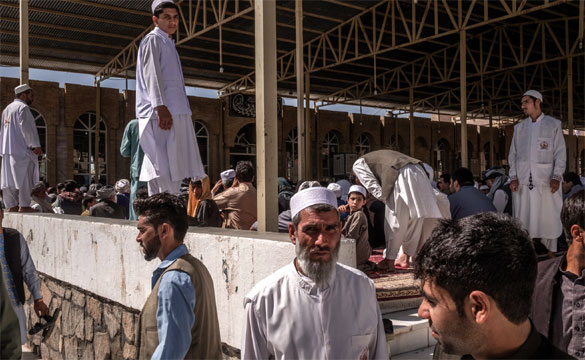 Maulvi Ansari’s enforcers during a recent Friday prayer at his mosque.

Another Islamic scholar, Abdul Majid Samim, said many Afghans embraced Maulvi Ansari and other extremist clerics because they condemned the government and its American backers. Some espoused violence, he said.

“You can’t implement Islam by force,” he said.

Recently, the government-run Ministry of Haj and Religious Affairs in Herat revived its dormant Office for the Promotion of Virtue and Prevention of Vice — though officials insisted that it was not to support Maulvi Ansari’s vice checkpoints, and that it did not punish anyone.

Still, the move has been seen as a victory for Maulvi Ansari, who said plans were underway to establish such offices in other provinces. Recently, the governor of Nangarhar Province said he would form a vice office, but later backtracked after an angry backlash on social media.

Maulvi Ansari is not taking no for an answer.

Sitting inside the mosque library, he insisted that a visiting American journalist convert to Islam. When the journalist declined, the cleric gave him a stern look and said, “Then you will burn in hell.” 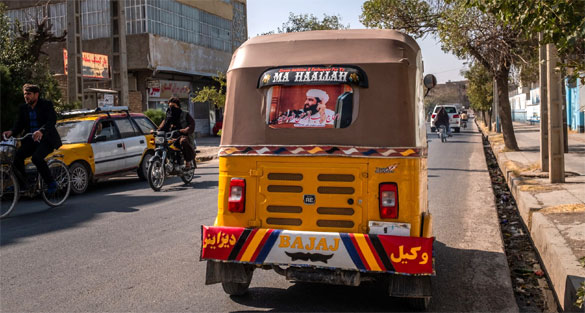 Maulvi Ansari’s image can be found on billboards and rickshaws in Herat.