The Changing Meaning of Jihad and Mujahid: Now Mujahid Means a Terrorist and Jihad Means an Act of Terror

Mujahid is not a Terrorist; Jihad is not Terror as the Terrorists have Manifested

1.    Somewhere down the line somebody came and changed the meaning of Jihad and Mujahid.

2.    Every mother's wish from Allah the Most Gracious is that of a Mujahid son who struggles against the deteriorating atmospheric social order in the society.

3.    The socially acceptable act of struggle to bring order in the society of a Mujahid is called ' Jihad’.

4.    There are many Muslims who started the act of terrorism by allowing sectarian abuses among themselves.

Every mother's wish from Allah the Most Gracious is that of a Mujahid son who struggles against the deteriorating atmospheric social order in the society. Every mother wishes their sons to do Jihad (struggle) against the evils of the social order. Every mother irrespective of religious beliefs, Hindu, Muslim, Christian, Jew, Buddhist or Jain, even those who are an atheist dream of a righteous, compassionate and loveable son whom the society looks at to at the time of social necessity. Such men are called ‘Mujahid’ in Arabic. The socially acceptable act of struggle to bring order in the society of a Mujahid is called ' Jihad’.

Mujahid in English is a person that struggles to establish the order of compassion, righteousness and justice in society, that can be called a warrior or a fighter or a struggler in the path of truth and justice. Thus, the word Jihad in English will be a just war or a just struggle. There will be no mother on the earth who will desist from giving birth to such a son who is regarded as a hero, a fighter for justice, in the society.

Islam, therefore, being a universal religion has been expecting all mothers to teach their sons to struggle in the path of righteousness and justice. And this is what all the mothers have been doing but somewhere down the line somebody came and changed the meaning of Jihad and Mujahid.

Now Mujahid means a terrorist and jihad means an act of terror. Allah has not bestowed upon anyone the power of doing anything bad for anyone. Had it been so, we the people would have destroyed the world and the human race would have finished. Therefore, it is foolish to blame anyone for anything bad that happens to us. It is we that unknowingly create devastating situations for us and after the devastation blame others. Muslims, therefore are themselves to be blamed for the Islam bashing, Islamophobia and phrases like ‘Islamic terrorism’ that has widely spread all over the world.

All the abuses and the bashings that Muslims of the world in general and Islam, in particular, are being sentenced to is not because of others.  There are many Muslims who started the act of terrorism by allowing sectarian abuses among various sects. This sectarianism took the form of hatred among communities and resultantly the nations, the organisations and the people looking for opportunities to abuse Islam took full advantage of the situation and created an unbridgeable rift among the Muslim communities and others.

The Muslim youth are turned into a terrorist in the name of being a Mujahid and the Jihad is turned into an act of terror by the enemy within. The youth who should have been trained in Jihad al-Nafs, practising spiritual ethics were given weapons and trained to kill all those who oppose them, irrespective of their religious identity. These terrorists cannot be called Mujahid and the present act of terror cannot be called Jihad by any parameter. Muslims are themselves to be blamed for the situation Islam and its followers are in. 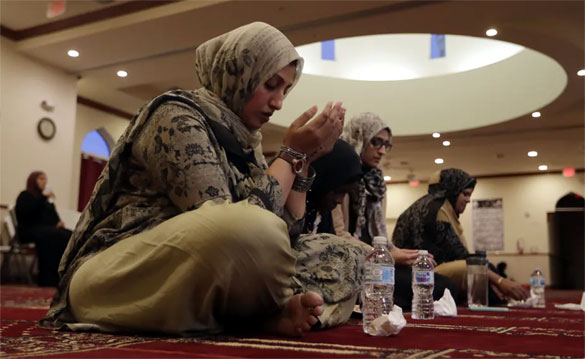 This term ‘jihad’ can include various forms of nonviolent struggles: for instance, the struggle to become a better person. AP Photo/Lynne Sladky

In Islamic parlance Jihad is of three categories, Jihad against self and Jihad against Satan is termed as - Greater Jihad and Jihad against an open enemy is known as – Lesser Jihad. It is thanks to the terrorist organisations, ISIS, Al-Qaeda, Boko Haram, Afghan Taliban and Pakistan Taliban and many others that Islam is not only losing its true ideology but is being religiously disintegrated from the social fabric of the society.

Now Jihad means, ' waging holy war’, ' killing whoever comes in the way’, and 'committing terrorism’. Now Jihad does not mean a struggle for getting a better education, quitting smoking, beating cancer and patenting. Now Jihad is no longer a struggle against self, the greater Jihad. Struggling for self-control is no longer taught in our society. Every struggle is against the establishment, the lesser Jihad. All have lost the urge to struggle against self that is the ' greater Jihad’ because of the denouncement of the beautiful words, Jihad and Mujahid. Islamic ideology of Jihad has been systematically abused to the extent that now it is hated and denounced.

Terrorists and the Quranic Commands

The terrorists are guilty of not following the command of Allah, the All-Knower, who says in the Holy Quran says: ‘Fight in the way of Allah those who fight you but do not transgress. Indeed. Allah does not like transgressors. - (al-Baqarah: 90)’. Allah, the Most Gracious has forbidden to transgress but the terrorists transgress all the boundaries of human rights in their quest of proving themselves right.

Allah, the Most Gracious further denounces the act of creating disorder in the society whereas the terrorists are prone to creating havoc among the people and the system. Consider the following verses:

“And create not disorder in the earth after it has been set in order” (7:57)

“Defraud not people of their things and commit not iniquity in the earth, causing disorder” (11:86)

Prophetic Traditions about the Real Jihad

Prophet, peace be upon him, said: “The fighter in Allah’s path strives against his lower self in (obedience to) Allah.”

Nothing is beyond the power of righteously guided actions, therefore, it is now on the Muslims of the world to come forward and engage in ‘Jihad against Self' to teach the Muslim communities about damages that terrorists have caused to the Muslims and the reputation of Islam. All concerned need to bring to the public view the spiritual and social downfall of Islam perpetrated by the terrorists hiding behind the peaceful and righteous Islam. Let again all the mothers wish to see their sons as the true guardians of Islamic ethics, engaged in ‘greater Jihad’, struggle against self.