Terrorists Are Against The Ethics Of Pluralism, Against The Empowerment Of Women And Against Education, All That Allah Asks To Follow.

1.       Hypocrisy and terrorism may be ingrained in a person, in an organisation or even in a country.

2.       Quranic verses and Prophetic traditions warn people to be aware of and away from the hypocritic mentality.

3.       Terrorists are a hypocrite because they are not what they say they are

4.       People’s simplicity and dearth of religious knowledge are exploited by the hypocritical (terrorist) organisations.

Terrorists are against the ethics of pluralism, against the empowerment of women and against education, all that Allah asks to follow. Another anti-Islam act of terrorists is the killing of innocent people who do not follow their path. If they are Muslims, as they say, they must know that the Holy Quran explicitly argues against the killing of a human being Terrorists are a hypocrite because they are not what they say they are. It is a typical hypocritic identity of hypocrisy.

Hypocrisy and terrorism is an evil trait. It may be ingrained in a person, in an organisation or even in a country. Quranic verses and Prophetic traditions warn people to be aware of and away from the hypocritic mentality. The Quranic Ayat and Prophetic traditions also have innumerable hypocritic incidents mentioned that occurred during the lifetime of the Apostle of Allah, Prophet Muhammad Pbuh and even before him. Hypocrites are habitual liars and cheaters by their nature.  Terrorism is based on hypocrisy as terrorists are never in public, what they are. They hide under the garb of religion.  Hypocrisy is one of the most heinous evils that Allah the Most Gracious hates the most. Hypocrites have an ingrained tendency to deceive. The terror organisations, of any continent or nation with a religious identity, are poles apart from the religion they are in the garb of. They cheat people in the name of religion, knowing well that it is the religion that can divert them from the real issues. 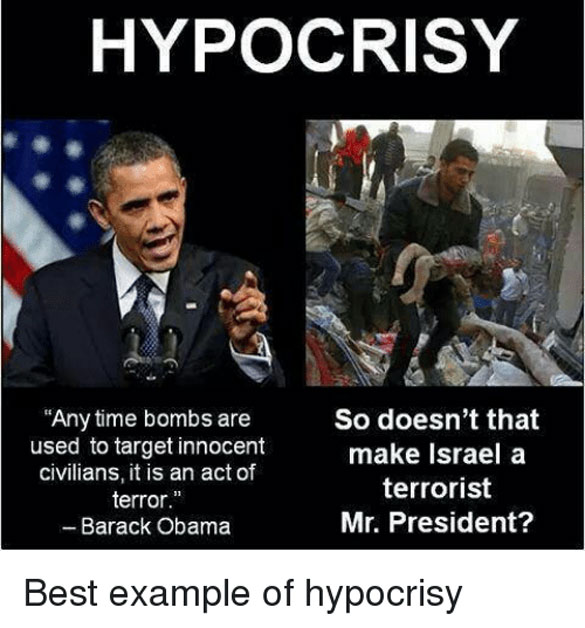 This is a world that is full of hypocritical politicians that help these hypocritical organisations with every kind of moral and monetary assistance to be used for their political and worldly gains. The terrorists are a hypocrite because they lie even to their masters. Terrorists’ political bosses are also being cheated by at one time or the other, by them. Terrorists are a hypocrite because they never show their original face either to their political bosses or to the people fighting for them or the people they say they are fighting for.

These hypocritical organisations deceive people of their faith with promises of a country or a society fully ingrained in the religious ethos of their liking which never sees the light of the day. People who come under their influence are mostly those who are pious at heart but unable to distinguish between right and wrong. These people’s simplicity and dearth of religious knowledge are exploited by the hypocritical (terrorist) organisations. And, in the name of religion people are forcefully subjected to follow all the irreligious practices that are nowhere found in the Books.

Following Quranic Ayat and Prophetic traditions will clear the air about the masquerading religious bigots and bring the true face of the terrorist (hypocrite) organisations in the open.

And that He might make evident those who are hypocrites - (3:167)

And when it is said to them, “Come to what Allah has revealed and to the Messenger,” you see the hypocrites turning away from you in aversion. - (4:61)

Give tidings to the hypocrites that there is for them a painful punishment - (4:138)

They have made their ˹false˺ oaths as a shield, hindering ˹others˺ from the Way of Allah. Evil indeed is what they do! (Al-Munafiqun: 2) - Dr Mustafa Khattab

O Prophet, fight against the disbelievers and the hypocrites and be harsh upon them. And their refuge is Hell, and wretched is the destination. - (9:73)

Indeed, the hypocrites will be in the lowest depths of the Fire – and never will you find for them a helper – (4:145)

Abu Huraira reported: The Messenger of Allah, peace and blessings be upon him, said, “Among the signs of a hypocrite are three, even if he fasts and prays and claims to be a Muslim: when he speaks he lies, when he gives a promise he breaks it, and when he is trusted he betrays.” – Sahih Al-Bukhari 33, Sahih Muslim 59

Zaid b. Thabit reported that Allah's Apostle (May peace be upon him) set out for Uhud. Some of those persons who were with them came back. The Companions of Allah's Apostle (May peace be upon him) were divided in two groups. One group said: We would kill them, and the other one said: No, this should not be done, and it was on this occasion that this verse was revealed: "Why should you, then, be two parties in relation to hypocrites?" - Book 38, Number 6684

Ibn Umar reported Allah's Apostle (May peace be upon him) as saying: The similitude of a hypocrite is that of a sheep which roams aimlessly between two flocks. She goes to one at one time and to the other at another time.  - Book 38, Number 6696 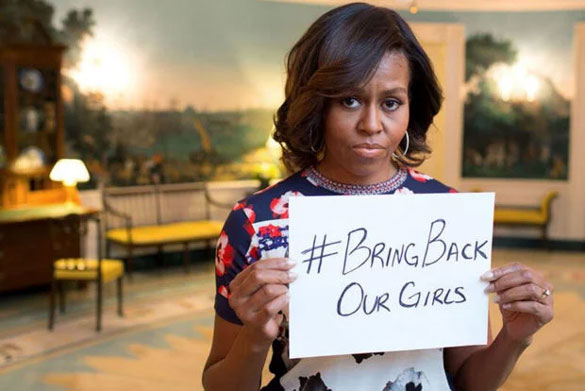 Women in Islam and Terrorists Behaviour with Them

These terrorist organisations are against the empowerment and social human rights bestowed upon the women by Allah the Most Gracious. In the name of piety and safety of women, the terrorist organisations make women a prisoner and their dwellings a prison. They force women to live in seclusion in the most unsocial environment. Women’s right to privacy and speech is snatched from them and they become a mystery that is difficult to understand. They are not allowed to live an individual life but are transformed into a baby producing machine.

These terrorist organisations conveniently forget that Hazrat Khadija RA was a businesswoman, to whom Prophet Muhammad Pbuh used to serve as an employee before she married him. Hazrat Aisha RA was a woman of such knowledge and integrity that she used to discuss matters of social value with the Apostle of Allah who used to carefully listen to her and pay consideration to her advice and points. These hypocrites forget to their benefit that even during the lifetime of Prophet Muhammad Pbuh, women used to help their warriors with medical assistance during the wars on the battlefield.

These terrorist organisations will have to acknowledge the respect and trust that Islam has bestowed upon them to rectify their mistakes and hope for Allah’s forgiveness otherwise as Allah the Almighty says they will be subjected to harsh punishment.

Allah, the Most Gracious has given the same treatment to women as that of men. To emphasize the equality between men and women regarding their respective duties, rights, virtues and merits, the Holy Quran says:

Allah, the All-Knower commands men to treat their women with respect. He does not like ill-treatment or oppression with women. Allah says in the Holy Quran:

O you who have believed, it is not lawful for you to inherit women by compulsion. And do not make difficulties for them in order to take [back] part of what you gave them unless they commit a clear immorality. And live with them in kindness. For if you dislike them - perhaps you dislike a thing and Allah makes therein much good. - (An-Nisa':19)

The Prophet of Islam (peace be upon him) said, "Women are the twin halves of men." 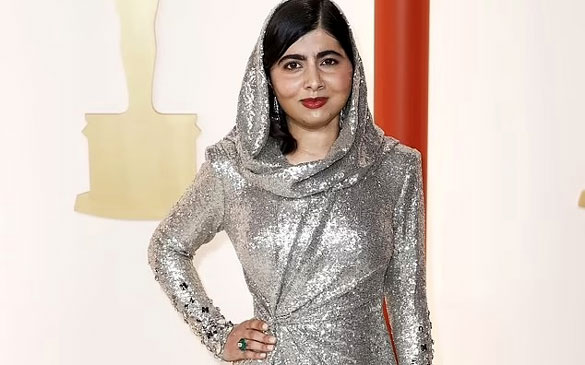 Importance of Education in Islam and the Terrorists Hate for Knowledge

Among all other things, terrorist organisations have done a great injustice with the essence of knowledge that is one of the most important essence of Islam. Islam has been a great advocate of knowledge. The first word revealed by Allah the Most Gracious on the holy Prophet Muhammad Pbuh was ‘Read’. And Quran has on various occasions commanded human beings to acquire knowledge irrespective of the problems and difficulties coming in the way. This great message of the Holy Quran has been valiantly abused by terrorist organisations, time and again.

Terrorists have killed innocent students in their schools and colleges and have bombarded the places of education in the name of religion, denouncing its teachings on the importance of education. Terrorists say they are against the western education that teaches improper and irreligious practices.

What the Holy Quran Says about Education

Read, ˹O Prophet, ˺ in the Name of your Lord Who created— (Al-'Alaq:1)

"Verily we have sent it down as an Arabic Qur’ān in order that you may understand" - Quran, 12:2

God will exalt those of you who believe and those who have knowledge to high degrees" (58:11)

Prophetic Traditions on the Importance of Education

"Knowledge from which no benefit is like a treasure out of which nothing is spent in the cause of God." - Al-Tirmidhi, 108

"One who treads a path in search of knowledge has his path to Paradise made easy by God." - Riyadh us-Saleheen

"The seeking of knowledge is obligatory for every Muslim." - Al-Tirmidhi, 74

"Inquire knowledge and impart it to the people." - Al-Tirmidhi, 107

"God, His angels, and all those in heavens and on Earth, even ants on their hills and fish in their water, call down blessings upon those who instruct others in beneficial knowledge."  -Al-Tirmidhi, 74

Above mentioned verses of the Holy Quran and the Prophetic traditions are a clear indication that whoever creates hindrances in the way of education is going against the teachings of Islam. The act of horror in it is terrorism and going against the call of Islam is hypocrisy.

Hypocrisy and Terrorism Both Break the Basic Idea of Religious Life

Hypocrites and terrorists both are against the Islamic essence of pluralism. Hypocrite break the confidence of one sect of people on the other and terrorists break religious symbols and religious places of other people. There are numerous incidents from the life of Prophet Muhammad Pbuh that point to his love for people of other religions and communities and the Holy Quran has verses denouncing hypocrisy and terrorism that goes against the spirit of other religions and faith.

Terrorism has plagued the world bringing in Islamophobia and hate for the religion they say they are fighting for. Terrorists will do well to themselves if they understand the soul of the Quranic revelations that has always been an advocate of a multicultural society. Allah the Most Compassionate says in the Holy Quran:

This Book, there is no doubt in it, is a guide to those who guard (against evil) - Al-Baqarah- 1)

We all should follow the above-mentioned verse and take its guidance against the evils of society. Be it Afghanistan, Syria, Iraq, Kuwait or Pakistan, terrorists have killed innumerable people not paying any heed to Allah’s saying in the Holy Quran:   "Whosoever killed a person ... it shall be as if he had killed all mankind" (5:32)

Killing a human being, for whatever reason, is like killing the whole of humanity. What other way could it be commanded to the people to take the world being as their brothers and sisters? It is a very pious month of Muharram ul Haraam and it is a reminder to humanity that lives are sacrificed to safeguard the religion, blood is not spilt. Allah’s creation is under the yoke of terrorism and hypocrisy, May on this Day of Ashura, Allah the Most Forgiving, forgive them who ask for His forgiveness. Ameen