Islamic Terrorism Defaced Islam’s Sheen and Attraction in the Society

1.    Vibhishan helped destroy Lanka for good reasons and here terror organisations are bent on destroying a religion that advocates all the pluralistic ethea.

4.    Why their ideologues do not understand that Islam does not allow bloodbath in the name of establishing Islamic ethos and essence in the society.

5.    It is because of Islamic terrorism that Islam is losing its sheen and attraction in society.

‘A small leak sinks a great ship’ is the English translation of a famous Hindi saying ‘Ghar Ka Bhedi Lanka Dhaye’ (घर का भेदी लंका ढाए।). This proverb is related to a part of the Ramayana in which Vibhishan, brother of the king of Lanka, Ravana, parted ways with him and sided with Bhagwan Shri Ram. Vibhishan’s support for Shri Ram became one of the greatest causes of the destruction of Lanka and Ravana.

The world is silently watching the above-mentioned part of mystic history being repeated in the context of religion of peace, love, compassion and pluralism by the Islamic terrorist organisations with a change in roles. There Vibhishan helped destroy Lanka for good reasons and here terror organisations are bent on destroying a religion that advocates all the pluralistic ethea needed to establish a cohesive and inclusive society.

It is easy to fight an enemy who is not from among us but it is all the more difficult to fight an enemy from among us. The first thing the enemy within does is that he divides the house into various parts thus making it weak to stand against the evil, the same is being done by the terror organisations. It is more than two decades now that the Islamic terrorist organisations are playing Vibhishan, for all the wrong reasons, and creating a rift among the followers of Allah and His Apostle. This is providing space to the ones that are engaged in Islam bashing and Islamophobia. 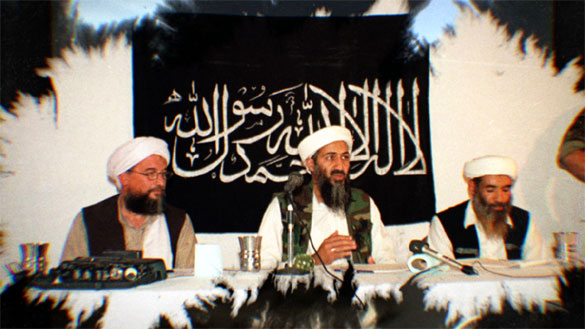 Al Qaeda, The global terror network founded by Osama bin Laden has been responsible for thousands of deaths on 9/11 and several other deadly attacks across the globe. (Photo courtesy/History.com)

Islamic Terrorism Defaced Islam’s Sheen and Attraction in the Society

The world is raging in the flames of war everywhere, for one reason or the other. But except a few of them, behind every clash, there is Islamic sectarianism that is at the foreplay of tensions between the nations. Islamic sectarianism is in the background of all the terror acts across the world. Islam bashers call it an Islamic supremacist attitude. And it is the terrorists who are creating rifts between Islam and other religions of the world. From Iraq and Kuwait war to war against terror, which America fought for two decades and lost, to ISIS brutalities in Syria to persistent war between Shia and Sunni's sects involving Iraq and Iran, Islam is under the line of attack for one reason or the other. And all these wars and infighting, except for some exceptions, have Islamic terrorism in the background and on the front.

Wars involving terrorist organisations are but sectarian supremacist ideological wars. Terrorist organisations, ISIS, Al-Qaeda, Boko Haram, TTP and Afghan Taliban etc. call themselves the true lag-bearers of Islam. Why their ideologues do not understand that Islam does not allow bloodbath in the name of establishing Islamic ethos and essence in the society.

These organisations are living in the era of Jahiliya. They have torn apart the string of basic tenets of Islam to shreds as the people of the age of Jahiliya used to do. The age of Jahiliya was the age before the birth of the Holy Prophet (SAW), now we have the Holy Quran and the Prophetic traditions for our guidance. Even in the face of opposition with other sects, the bloodbath is not allowed. There is Misaq-e-Madina for the guidance related to Muslims relationship with the followers of other religions.

Islamic terrorism has achieved nothing but unending miseries for the believers. The world is coming to the rescue of the Muslim refugees with all that it can provide. World humanitarian forums are trying to console and protect the people who have faced the tyranny of the worst kind from their brothers in religion. Islam knows the psychological and physical torture a refugee goes through as even the Apostle of Allah, Prophet Muhammad Pbuh has been a refugee, having fled Mecca with his companions and followers and was cared for by his host communities.  Among the Prophets, Prophet Abraham (AS) and Prophet Musa (AS) have also lived in a refuge where they were taken care of by their hosts.

Quranic Verses on Compassion with the Refugees

Indeed, those who have believed and emigrated and fought with their wealth and lives in the cause of Allah and those who gave shelter and aided - they are allies of one another. - (Al-'Anfal - 72)

It condemns people whose actions prompt mass migration and views them as lacking faith in God’s words [2: 84-86]

'In what circumstances were you?' They replied: 'We were too weak and helpless in the land.' The angels said: 'Was not the earth of Allah wide enough for you to emigrate in it?'130 For such men their refuge is Hell - an evil destination indeed; except the men, women, and children who were indeed too feeble to be able to seek the means of escape and did not know where to go.  - (An-Nisa: 97- 98)

Then We delivered him, along with Lot, to the land We had showered with blessings for all people. - (Al-Anbiya - 71)

Some Rights In Islam of Refugees and Asylum Seekers, Especially Women and Children

1.    All people fleeing persecution are entitled to asylum and the rights associated with that status.

2.    Measures to meet the needs of these individuals are a public duty.

3.    Refugees should not be left vulnerable to persecution and injustice.

5.    Any decision concerning refugee children should take account of their basic interests [2: 220]. They are entitled to a healthy upbringing and education. From an Islamic perspective, children are innocent, their talents should be fostered [4: 2-4] and they should not be discriminated against.

6.    Children and women, according to some interpretations of Sharia, being more vulnerable, should be treated with affirmative action (positive discrimination). The Muslim prophet reiterated the rights of women and children more than any other group. Refugee children and women are among the most deprived people in the world and Muslims should allocate part of their charitable efforts to their support. From a religious perspective, what is offered to these individuals is theirs by right [70: 24, 25].

7.    If the guardian of a child is granted asylum, the child has to be offered the same status thus preserving the right of children to remain with their families.

8.    The right of these individuals to be reunited with their families should be respected. If parents of these children are not found, the children’s relatives should provide protection.

9.    The stage should be set for these refugees to return to their place of origin when such movement is deemed safe [9: 6].

10. They should be treated well at all times.

The Afghanistan crisis at hand has created a problem of migration. Afghan men, women and children are migrating in large numbers. Many of them have even lost their lives in the process. The lives of the migrants must be the priority of all the Islamic nations along with the nations that are taking care of the asylum seekers. As per the reports, almost all the Afghan refugees are getting refuge in the western countries, except a few who have fled to neighbouring Pakistan and Iran. Islamic countries too should come forward and arrange all that is necessary for a decent life of the men, women and especially the old and the children.

“The rights of migrants are the same as those of their hosts.” - Prophet Muhammad Pbuh