I Practice Jihad Every Day and I Am Not a Terrorist

Say the word ‘jihad’ in an airport and a myriad of frenzied security officers will probably swarm around, grab you, search you, drag and detain you until they are certain that you have not hidden a bomb somewhere.

In history, people of different faiths have harmed, killed, and robbed, while slapping on the label: for the sake of God. The acts of radical individuals or groups cannot be used to demonize their religion or faith, be it Judaism, Christianity, or Islam.

The correct translation of the word jihad is struggling, striving, or exerting an effort. The word jihad is skewed and played with even further in the media. It is incorrect to call the one who practices jihad a jihadi or jihadist, rather he is a mujahed.

The jihad that Islam promotes is the inner jihad, the strength and willpower to refuse to give in to base desires and whims, to exercise higher thought processes, morality, and self-discipline. Jihad in Islam is an on-going battle against the self when it gets inflated or out of control and has an inclination towards corrupt behaviors such as greed, wantonness, arrogance, laziness, and every evil trait.

The battlefield for a Muslim’s jihad is not a skyscraper in an American city, or a European street, or the desert, or an airplane; it is in his heart.

The respected scholar, Shaykh Abdallah bin Bayyah, said, “Jihad is not synonymous with fighting. Hence, not all jihad is fighting, and not all fighting is jihad. A deeper reading of the primary sources of Islam makes clear that jihad includes all devotions.” The reverence and servitude of one’s elderly parents is jihad.

Prophet Muhammad (peace be upon him) told one of his companions, “Make your jihad serving them [your parents].”

In another Hadith, Prophet Muhammd (peace be upon him) said, “The real jihad is to strive against the ego in order to obey God.”

The great scholar of the past, Ibn Taymiyyah, said that jihad includes all devotions and righteous acts.

The outer jihad, fighting the enemy, exists in the history of Islam. However, there are many conditions in order for any type of military jihad to be undertaken, and it cannot be decided upon by any random person or group. And it is not a viable option except in certain situations, and must be agreed upon by a unified Muslim nation, under a knowledgeable leader.

There are very strict regulations: women, children, and invalids must never be harmed, houses must not be demolished, and even a tree must not be burned down.

Shaykh Abdallah bin Bayyah said, “As for the jihad when it relates to fighting, that is in defense of the freedom to practice one’s faith. Believers are also ordered to accept any attempts at peace.”

Prophet Muhammad (peace be upon him) announced armed jihad against the people of Quraysh because they harshly persecuted and tortured those Muslims who remained in Makkah and were unable to migrate to Madinah. Quraysh also refused to allow Muslims to preach and convey the message of Islam to other tribes and territories in Arabia. Quraysh broke the treaties between themselves and the Muslims. The leaders of Quraysh continued to conduct military campaigns and raids, targeting the Muslims in Madinah, with the sole purpose of eradicating Islam.

One day, during the time when the early Muslim community was struggling for its very existence, the Prophet (peace be upon him) and his companions had just returned from battle.

He (peace be upon him) said, “We have just returned from the lesser jihad, but now we are entering the greater jihad.” “Oh Prophet of God, what do you mean?” they asked. “I mean,” he said, “that the greater jihad is the struggle with our own egos.”

The form of jihad that 99.9% of devout Muslims across the world follow is remembering Allah at all times, building mosques, giving in charity, standing in prayer five times a day, fasting, being kind to people, raising their children, seeking education, and earning an honest living.

The personal struggle in striving to overcome temptations is a strenuous one. No wonder why Allah has promised so much reward for the man and the woman who is able to exercise control over their desires and the whisperings of the devil. I practice jihad each day; we all do.

After listening to the bickering, name-calling, and fighting that usually ensues between my teenage son and daughter for over an hour, I resist the urge to yell “QUIET” at the top of my lungs and put a sock in each of their mouths. Instead, I ever so sweetly and sanely say, “Stop fighting. One day when you are each off to college in a different country you will miss each other deeply and regret every bitter moment that passed between the two of you.”

And after toiling away in the kitchen for four hours to cook a delicious Moroccan dish of lamb stew with prunes and almonds, my five-year old spat out her first spoonful in disgust. I resist the urge to dump the plate on her hair, and I graciously make her a peanut butter and jelly sandwich. 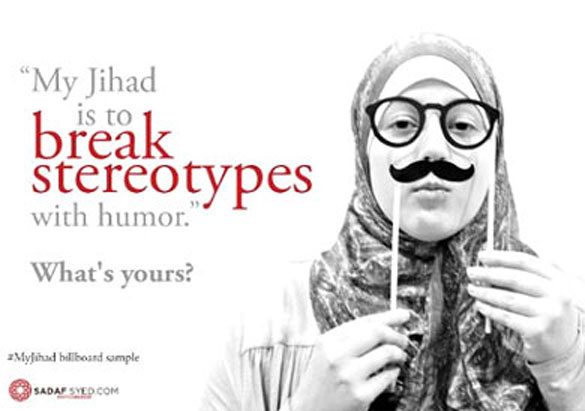 I practice jihad when I wear my Hijab, strolling down the streets of a small town in the US, trying hard to smile pleasantly at the disdainful, staring faces.

Here is what other Muslims had to say about how they practice jihad.

“My jihad is to stay fit despite my busy schedule,” said Haura Al-Maqsurah.

“My jihad is to be better than yesterday,” said Saleh Ashaka.

“Being a better teacher is my jihad,” said Sarah Saharah.

“My jihad is to balance work and family life,” said Yasmin.

“My jihad is pulling myself out of my warm bed to perform the pre-dawn prayer,” said Nour Moustafa.

“My Grandma’s jihad was struggling with diabetes and multiple sclerosis while being bedridden for seven years,” said Ahmed Rehab.