Wahabization-Salafization of Pakistan and Muslim Ummah: Fighting the Terrorists But Supporting Their Ideology

Within the last two weeks more than 200 innocent Pakistani Muslims have been killed by the suicide bombers. When I heard the news that the terrorists have attacked the military headquarters (GHQ) in Rawalpindi, Pakistan, I was shocked but not surprised. A week ago, forty Pakistani Muslims were killed in the Sawat Valley by the suicide bombers.  Few days ago five more suicide bombings in Lahore and Peshawar killed more than 35 Pakistan Muslims.  The daily killings of innocent civilians in Pakistan, Afghanistan, Iraq and elsewhere is becoming so routine that people have stopped paying attention to these atrocities.  The abnormal and inhumane behaviour of fanatics is becoming normal for many people. 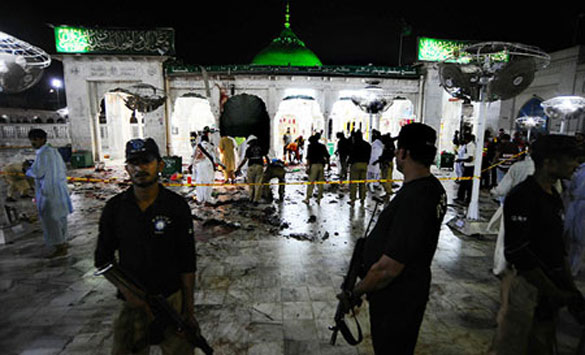 Security forces stand guard outside the Data Ganj Baksh shrine in central Lahore, one of Pakistan's most famous Sufi shrines, after bomb blasts ripped through the building, killing dozens

As a Muslim I know that killing another Muslim is a major sin and a crime in Islam. Then the question arises, why the Taliban, Al Qaeda OR any other “so called Muslim” groups are killing innocent Muslims?  Why would a Muslim kill another Muslim knowing that the Prophet Muhammad (peace be upon him) has said that the life, property and the honour of a Muslim is HARAAM (forbidden) on the other Muslim.  Why a fanatic who happens to be a Muslim will not eat pig because it is “Haraam” but will be willing to kill a fellow Muslim, which is a bigger “Haraam” in Islam?  According to Prophet Muhammad (peace be upon him) the honour of a believer is holier than the Ka’ba – the holiest place for all Muslims in Makkah.  Then why would a Muslim suicide bomber randomly kills Muslim children, women, elderly and ordinary citizens?  Lets find out.

In 18th century, a clergyman made an alliance with a tribal chief in Najd in Arabian Peninsula and formed an army to establish a kingdom in the Arabian Peninsula.  He used the political influence of the tribal chief and the power of religion (Islam) to fight against his opponents. Coincidently, his opponents were not Christians, Jews OR Polytheists.  His opponents were all fellow Muslims.  He wanted to eliminate his opposition. He needed a religious excuse to fight against his enemies. So he found excuses in the early history of Islam.

The clergyman of Arabia issued Fatwa and declared his opponent Muslims apostates for practicing the above mentioned traditions. He declared “Jihad” against them.  This clergyman and his army destroyed the holy shrines, relics and the historic Islamic sites.  The clergyman declared the traditional Islamic practices as an innovation (distortion) in Islam and declared his opponents, BID’ATEE (innovators).  He did not consider fellow Muslims as Muslims. The ideology this clergyman formed is called SALAFISM OR WAHABISM, the modern form of “Khawarijism”. The foundation of Salafism/Wahabism is based upon one simple rule. “Anyone who disagrees with you is not a Muslim and must be eliminated”. This clergyman was Muhammad Ibn Abdul Wahab who helped in forming the Kingdom of Saudi Arabia.

Salafism/Wahabism is an ideology of killing, hate and intolerance, which started in Saudi Arabia. It has now slowly spread all over the world.  In Salafism / Wahabism killing a Muslim who does not join the group has more reward from God than killing an infidel who fights against Islam.

Wahabization-Salafization of Pakistan and the Muslim World

In Pakistan the massive penetration of Salafism was started in early 70s when Pakistanis started going to Saudi Arabia for jobs. The oil boom brought development in Saudi Arabia as well as jobs for Pakistanis and others. However, during the time of General Zia ul haq this Salafism / Wahabism started penetrating into the armed forces of Pakistan. At that time the Afghan Jihad had started. With the American weapons and Saudi petro dollars the Salafi/Wahabi ideology was inserted into the minds of hundreds of Muslims. This Wahabi/Salafi ideology came from Saudi Arabia to Pakistan.  It was impossible for Pakistanis and Pakistan’s Armed Forces to protect themselves from the influence of this ideology.

Beside several slogans, “NA’RA-E-HAIDARY”, “YA ALI” used to be one of the most frequently used slogans in Pakistan Armed Forces.  It’s no more allowed. Wahabi/Salafi ideology considers “NA’RA-E-HAIDARY”, “YA ALI” an apostasy. The long Islamic traditions have now been abandoned due to the fact that the Pakistani Armed Forces have embraced the Wahabi/Salafi ideology due to the influence of Saudi Arabia and the blessings of the Afghan “Jihad”.

I do not have the official stats regarding the affiliations of mosques in Pakistan with different denominations but I can analyze this based upon my own observations.  I have calculated the following stats based upon the number of Eid prayers held in different places across the country. In Pakistani newspapers Eid prayers are identified by the sects and people know what mosque belongs to what sect.

(Note: Deobandis are very close to Salafi/Wahabi ideology. Most of the Taliban belong to Deobandi sect.  The Pakistani Taliban are either Deobandi OR Salafi).

This dramatic shift in mosques affiliations was due to the huge financial backing by the Wahabi/Salafi organizations, government of Saudi Arabia and escalated propaganda by the Saudi government institutions against the beliefs of Ahle Sunnat Wal Jama’t.  When Muslims go to Saudi Arabia for pilgrimage, they are brainwashed by the employees of the Saudi government.  They openly preach and force Wahabi/Salafi beliefs on pilgrims. They spend millions of dollars on the distribution of Salafi/Wahabi literature around the globe.

Throughout history, in Bosnia, Kosovo, Chechnya, Uzbekistan and Tajikistan there has never been a Wahabi/Salafi mosque. Now 90% mosques are controlled by Wahabi/Salafi Imams. In Indonesia, Malaysia and other Far Eastern Muslim regions a Salafi/Wahabi mosque hardly existed before 70s.  The overwhelming majority of the mosques were Ahle Sunnat Wal Jama’t. Today, you will hardly find an Ahle Sunnat Wal Jama’t mosque in these regions. The majority of mosques are now controlled by Wahabi/Salafi Imams.  The reason is the huge financial support from the Salafi/Wahabi organizations of Saudi Arabia.

Pakistanis cannot have peace in their country unless peace preaching Imams return to their mosques. With Salafis/Deobandis controlling the majority of the mosques in Pakistan, it will be extremely difficult to have peace in mosques, in the communities and in Pakistan.

The Real Danger to World Peace

The real danger to the world peace is due to two things.

The Western greed to control the Muslim countries and their resources.

The increase in religious intolerance due to the Wahabi/Salafi ideology.

Western greed is one of the major contributors in spreading the Wahabi/Salafi ideology. All Western countries including Canada and the USA want good economic and political ties with the Wahabi/Salafi institutions due to oil and investments. Saudi Arabia is now a member of the G20.  How can anyone stop Wahabism/Salafism now?  Due to the western ties and interest with the Salafis/Wahabis, the governments in the West ignore the dangers of this hateful ideology. The Western countries are fighting the terrorists but they are supporting the ideology that creates terrorism.  Western countries cannot have both ways. In order to eliminate terrorists you need to stop the brain washing ideology that creates terrorism.

The neo-cons and the Islamophobes blame Islam for the atrocities carried out by the suicide bombers and the terrorists.  They wrongly quote verses from the holy Qur’an. They badmouth about Islam and our beloved Prophet Muhammad (peace be upon him). They blame Muslims for the crimes of Salafis/Wahabis. The reality is that the Wahabi/Salafi ideology creates fanatics and extremists, not Islam.

The followers of Islam believe that Prophet Muhammad (peace be upon him) is the last and the final Prophet and Messenger of Allah and Qur’an is the final divine book from Allah.

Unless the Pakistani government brings back Ahle Sunnat Wal Jama’t into the mosques and supports them, the elimination of fanatics and extremists will be impossible.  The same goes for Canada and all western countries. The extremist ideology will breed extremism only. It is our responsibility to stop any ideology that creates hate against fellow citizens.  Although, the Islamophobes and Salafis/Wahabis are two very different groups but what creates similarity between the two is the greed to control and intolerance for difference of opinion.   “Khawarij” and “Crusaders” did exist in the past and they are reviving themselves in the modern times.

May Allah keep us safe from the evil of extremists and fanatics! Ameen.