The Lives of Muslim Terror Victims Matter Too

By Abdi Nor Iftin 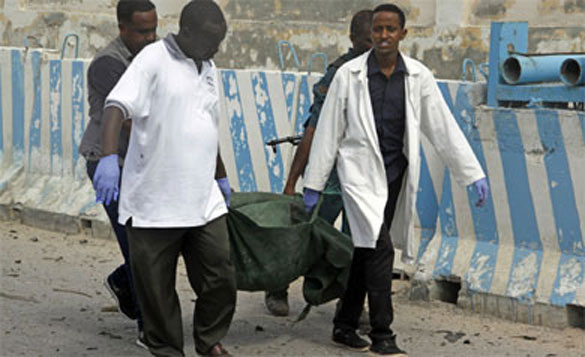 United Nations office guards carry the dead body of their colleague, who was killed in a suicide car bomb, outside the U.N.'s office in Mogadishu, Somalia, on July 26. (Farah Abdi Warsameh/Associated Press)

When Islamic terrorists killed a priest in France last month, it was front-page news. Yet when terrorists in Mogadishu, the capital of Somalia, killed more than a dozen civilians that same day, the story received much less prominent coverage. This was despite the amazing revelation that one of the Mogadishu suicide bombers was reportedly a former member of the country’s parliament — quite a news hook, as they say in journalism.

As a Somali who spent years reporting from Mogadishu and Nairobi, I understand such editorial decisions. For readers and listeners in developed countries, France is clearly a different world than Somalia. Yet I am concerned that as Republican Donald Trump’s presidential campaign and far-right Europeans translate Islamic extremism into Islamophobia, the West will continue to ignore the huge numbers of terrorism victims worldwide who are Muslim.

It goes without saying that terrorism victims in the developing world are humans whose lives are as valuable as those in the West. Less appreciated is that our cultures are also as valid, and are being destroyed. As recently as the early 20th century, Mogadishu was known as the Pearl of the Indian Ocean. It was a capital of Arabic trade and learning for centuries. The historic centre contains the remains of medieval sultans’ palaces, ancient mosques among the largest in Africa, even a stone lighthouse built before Columbus arrived in the Americas.

You would not want to go there today.

I grew up surrounded by death and destruction in Mogadishu. I have been staring into gun barrels as long as I can remember. First it was rebel militias fighting the central government; then, after there was no more government, came the Islamic terrorists. Escaping death was for the lucky. I watched fighters shoot old men for target practice. I saw wailing mothers forced to leave dead babies by the roadside, unable to bury them. I saw my own sister starve to death. One day my father kissed me goodbye; the rebels were killing all the men, so he had to leave. He returned 10 years later. Before I could tell him I thought he must have been dead, he said he was surprised I was still alive. I guess we were both just lucky.

Mogadishu’s booby-trapped streets were my playground. Danger was everywhere. One day, while pointing his gun at my head, a young rebel fighter accidentally dropped a bullet. I picked it up and handed it to him, the way you would if someone dropped a glove on the bus. That might have saved me. He took it and left. A few years later, a group of armed men showed up at a family wedding, demanding money. They grabbed me and pointed guns at my head. By then I was used to guns being pointed at me, but I will never forget my mother’s face at that moment. She was trembling in fear. They let me go when they realized we had no money. The eyes of the gunmen were red and spelled death.

For six years, I lived under Sharia law imposed by the terrorist group al-Shabab. I was hung by my wrists for watching a World Cup match. One time the terrorists caught me walking on the beach with my girlfriend, and they whipped us. Muslim terrorists hate Muslims like me even more than they hate you, because they view me as a traitor. In Mogadishu, they called me evil because, after saying my prayers, I liked to dance, go to movies, play soccer and hold hands with my girlfriend. They wanted me to stay in the mosque and listen to their anti-Western propaganda, then join them in jihad against infidels — including moderate Muslims.

I refused. I wanted to be an American ever since I was a kid watching “Rambo” movies in a video shack in Mogadishu. I learned my first English from another American immigrant: Arnold Schwarzenegger. (“I’ll be back!”) Eventually I became the video shack’s translator, shouting out dialogue for the audience as the movies played. I put Michael Jackson songs on my cellphone, and then hid the phone’s memory card in a hole under my mattress. When members of al-Shabab said they would kill me for speaking English, I knew I had to escape.

Today I live in beautiful Maine, now home to about 10,000 Somali immigrants. I am counting the days until I qualify for U.S. citizenship. I want to be an American like the ones I watched in that video shack in Mogadishu. Americans are always the good guys in the movies. But my Muslim countrymen back in Somalia, and in dangerous refugee camps in Kenya, are good guys, too. For them, terrorism is not some outlier event like a plane crash, or something more likely to happen in a Hollywood movie than in real life. It’s just another day.

Abdi Nor Iftin has lived in Yarmouth, Maine, since 2014.