We Must Not Allow Muslims in Public Life to Be Silenced

Even in polite society, fear-mongering, negative stereotyping and abuse are now out of control – as I know from bitter experience 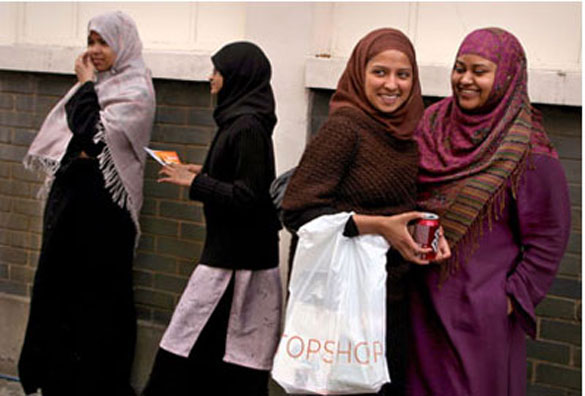 Have you ever been called an Islamist? How about a jihadist or a terrorist? Extremist, maybe? Welcome to my world. It's pretty depressing. Every morning, I take a deep breath and then go online to discover what new insult or smear has been thrown in my direction. Whether it's tweets, blog posts or comment threads, the abuse is as relentless as it is vicious.

You might think I'd have become used to it by now. Well, I haven't. When I started writing for a living, I never imagined I'd be the victim of such personal, such Islamophobic, attacks, on a near-daily basis. On joining the New Statesman in 2009, I was promptly subjected to an online smear campaign, involving a series of selectively edited videos of speeches I'd delivered in front of groups of Muslim university students several years ago. I was accused of being a "secret" member of the extremist group Hizb ut-Tahrir, and a "dangerous Muslim shithead" in the "same genre" as the Nazis. The post that sticks in my mind is from the blogger who referred to me as a "moderate cockroach" whose Islamic faith was "no different from the Islam of Abu Hamza, Abu Qatada, Ayman al-Zawahiri, Anjem Choudary or any of the 'tiny minority' of Islamic terrorists who believe that Islam must dominate, no matter what the cost".

Three years later, as I leave the New Statesman to join the Huffington Post UK, little seems to have changed. "Huffington Post's new UK political director brings pro-Iran baggage," screamed the headline on the Fox News website back in late May. My "baggage"? I once publicly praised a fatwa from Iran's supreme leader, Ayatollah Ali Khamenei, forbidding the production of nuclear weapons. Shame on me! Another ultra-conservative US news website, the Washington Free Beacon, referred to me as the "HuffPo's house Jihadi".

The mere mention of the words "Islam" or "Muslim" generates astonishing levels of hysteria and hate on the web. As one of only two Muslim columnists in the mainstream media – the other being the Independent's Yasmin Alibhai-Brown – I have the dubious distinction of being on the receiving end of much of it. In August 2011, for instance, I wrote a light-hearted column in the Guardian on Ramadan, examining how Muslim athletes cope with fasting while competing. The article provoked an astonishing 957 comments, the vast majority of which were malicious, belligerent or both. As one perplexed commenter observed: "There is much we might criticise Islam for … but to see the amount of hatred being spewed on this thread on an article about something as innocuous as fasting really makes one wonder." Indeed.

And it isn't just pieces about Muslims. A recent interview of mine with the shadow chancellor, Ed Balls, elicited the following response: "Get out of my country, goatfucker." How many other political columnists have to deal with such "feedback"? And how many of my fellow pundits in the British media get death threats in the post, warning them that "there will not be 1 live Muslim left in Europe when we have finished"?

From my perspective, the British commentariat can be divided into three groups. The first consists of a handful of journalists who regularly speak out against the rising tide of anti-Muslim bigotry – from the Telegraph's Peter Oborne to a bevy of Guardian columnists, including Jonathan Freedland, Seumas Milne and Gary Younge.

The second consists of those writers, such as the Mail's Melanie Phillips, the Telegraph's Charles Moore and the Spectator's Douglas Murray, who see Islam and Muslims as alien, hostile and threatening. Phillips has referred darkly to a "fifth column in our midst"; Murray has said "conditions for Muslims in Europe must be made harder across the board".

But it is the third, and perhaps biggest, group that concerns me most: those commentators who boast otherwise impeccable anti-racist credentials yet tend to be silent on the subject of Islamophobia; journalists who cannot bring themselves to recognise, let alone condemn, the growing prevalence of anti-Muslim feeling across Europe – or acknowledge the simple fact that the targeting of a powerless, brown-skinned minority is indeed a form of racism.

I'm a fan of robust debate and I'm not averse to engaging in the odd ad hominem attack myself. This isn't a case of special pleading, on behalf of Britain's Muslims, nor do I think my Islamic beliefs should be exempt from public criticism. But the fact is that you can now say things about Muslims, in polite society and even among card-carrying liberal lefties, that you cannot say about any other group or minority. Am I expected to shrug this off?

The truth is that the fear-mongering and negative stereotyping is out of control. I've lost count of the number of websites that try to "out" every Muslim in public life as an extremist or Islamist of some shape or form. The promotion of Sayeeda Warsi to the Conservative frontbench in 2007 provoked the influential Conservative Home website to describe her appointment as "the wrong signal at a time when Britain is fighting a global war against Islamic terrorism and extremism". Labour's Sadiq Khan, the shadow justice secretary, was accused of holding "extremist" views after he called for a "more independent foreign policy" and was spuriously linked to Hizb ut-Tahrir. In April, Labour peer Lord Ahmed was suspended from the party after he was falsely accused of having put a £10m bounty on Barack Obama's head (the suspension has since been lifted).

If Muslims such as Warsi, Khan, Ahmed and me are all secret extremists, who are the moderates? That, of course, seems to be the implicit, insidious message: there aren't any. But if those of us who try to participate in public life and contribute to political debate are constantly painted with a broad brush of suspicion and distrust, then what hope is there for the thousands of young British Muslims who feel alienated and marginalised from the political process? I used to encourage Muslim students to get involved in the media or in politics, but I now find it much harder to do so. Why would I want anyone else to go through what I've gone through? Believe me, Muslims aren't endowed thicker skins than non-Muslims.

To say that I find the relentlessly hostile coverage of Islam, coupled with the personal abuse that I receive online, depressing is an understatement. There have been times – for instance, when I found my wife curled up on our couch, in tears, after having discovered some of the more monstrous and threatening comments on my New Statesman blog – when I've wondered whether it's all worth it. Perhaps, a voice at the back of my head suggests, I should throw in the towel and go find a less threatening, more civilised line of work. But that's what the trolls want. To silence Muslims; to deny a voice to a voiceless community. I shouldn't have to put up with this abuse. But I will. I have no plans to let the Islamophobes win. So, dare I ask: who's with me?