Islamophobia Watch: Jesuit Priest of Kerala Warns Bishops against Falling Into the Trap of Love Jihad and Narcotics Jihad

2.    Another priest Roy Kannanchira said that nine Christian girls were lured away by Muslims.

3.    Jesuit Priest Fr Cedric Prakash warned the priests against falling into the trap of Islamophobia.

4.    He said that the Bishop needs to have the honesty to address the  financial and sexual scandals within the Church

In Kerala where Christian population accounts for 18% of the population and so the Church wields considerable political influence in the state, a Catholic bishop of Pala, Joseph Kallaranghat alleged that Muslims of the state were deliberately luring Christian girls to convert them into Islam. He had said that Muslims of Kerala were waging a Love Jihad and Narcotics Jihad to lure Christian girls of the state into marrying them in order to convert them into Islam. Another senior priest Roy Kannanchira also alleged that nine Christian girls had been lured away by Ezhava community boys. After a harsh rebuff from Ezhava community leader Vellapally Natesan, Kannanchira apologises and withdrew his statement.

However, this Islamophobic campaign was criticized by Jesuit Priest of Kerala, Cedric Prakash has penned an open letter to the bishops  community warning them against falling into the ‘meticulously planned’ trap of the right wing Hindu organizations that continuously circulate the idea of Love Jihad and Narcotics Jihad to cause fear and hatred of Muslims among the majority community. Fr Cedric Prakash has said that such narratives are a highly manipulative way of more important issues to the back burner.

Fr Prakash said that such narratives of Love Jihad is— a Right-wing concoction served to the gullible Hindus to spread false propaganda against Muslims.

This should be seen in the backdrop of orchestrated protests by the lay Christians against the corruption and venality in the church is gaining momentum in the Christian community of Kerala. The common Christians have challenged the authority of the church. Some recent events of moral corruption in the church has caused great embarrassment to the church.

The Sister Abhaya murder case is a flagrant example of the moral corruption in the church. A priest and a nun have been proven guilty and have been sentenced to life. After the murder, the dead bodies of 20 nuns had been retrieved from wells in various convents. Moreover, Major Archbishop George Alencherry will soon undergo trial for alleged fraudulent land deals. Another Bishop Franco Mulakkal is accused of raping a nun and is facing trial.

It seems that these cases of moral and financial corruption have compelled the bishops and priests to resort to Islamophobic campaign to divert the attention of the common Christians. But Fr Cedric Prakash warned them against adopting such counterproductive acts. Kerala is an example of multicultural peaceful society where Hindus, Muslims and Christians live peacefully and respect each other.

Fr Prakash has rightly reminded the bishops and the priest spreading the narrative of Love and Narcotic Jihad of the constitutional guarantees for every adult citizens to choose one’s religion and life partner. He said that if someone forces anybody to convert his or her religion or kidnaps a girl to marry her forcefully, the law provides for stringent punishment against him.

Fr Prakash added in his letter, “The Bishop needs to have the honesty to address the scandals: financial and sexual within the Church.”

The statements of Bishop Joseph Kallranghat and Roy Kannanchira shows that the narrative of Love Jihad and Narcotics Jihad circulated by the right wing Hindu organizations have influenced the Catholic priests and they have fallen in their trap. But Jesuit Priest Fr Cedric Prakash has rightly warned them against falling into the trap and damaging the secular and multicultural fabric of Kerala.

Politics by Other Means 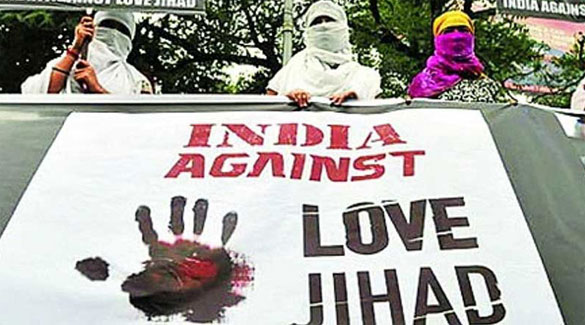 According to Joseph Kallarangatt, the Catholic bishop of Pala, Muslims in Kerala are pursuing a sinister plot against his flock. They make matrimonial forays and narcotic infiltrations into the fold and lure gullible youths to their doom. A senior priest, Roy Kannanchira, also alleged that nine Catholic girls were lured away by Ezhava ‘enemies’, especially trained for the purpose. This invited a searing rebuff from Vellappally Natesan of the Ezhava community. Unnerved, the priest withdrew his allegation and apologized. Another priest spewed communal poison against the Muslims in the chapel of a convent in Kuravilangad. Four nuns boycotted the proceedings in protest.

Kannanchira’s apology can mean only this: the alleged ‘love jihad’ against Catholic youth is a spectre of Kallarangatt’s subjectivity. It undermines the credibility of the bishop’s charges. Why does the bishop stand firm while the priest becomes apologetic in an identical situation? There is only one explanation for this. It is counterproductive to provoke the Ezhavas, whereas it is profitable to bait the sorely besieged Muslims.

This view is reinforced by the striking similarity between the strategy of the Catholic Church in Kerala and that of the sangh parivar nationally. Both need the Muslim community as a hate object. The bishop’s ‘narcotics jihad’ allegation is shrewdly timed. The capture of Afghanistan by the Taliban, the most-feared hybrid of terrorism and narcotics, provides the ideal moment to raise the spectre of a ‘narcotics jihad’ unleashed by ‘sleeping Muslim terror cells’ in Kerala. In this, the operative mindset is that of the sangh parivar. Whether the Pala bishop plagiarized it opportunely or was tutored in it by an interested party remains to be settled.

It is easy to see why the Syro-Malabar Catholic Church is forced to resort to the ‘religion-is-in-danger’ bogey. It has suffered a series of moral earthquakes. In the Sister Abhaya murder case, a priest and a nun have been proved guilty and condemned to life-long imprisonment. Since that murder, dead bodies of around 20 nuns have been recovered from various convent wells. Major Archbishop George Alencherry is due to undergo trial for alleged fraudulent land deals. Bishop Franco Mulakkal, accused of raping a nun, is facing trial. Orchestrated resistance to corruption and venality in the church is gathering momentum. Lay defiance of the church’s authority, unimaginable in the Catholic Church till recently, is becoming the new normal.

The resultant insecurity is aggravated by political and economic factors. Politically, the power-base of the Catholic Church — the Catholics comprise 60 per cent of Christians in Kerala — has been weakened by two factors. First, the shift in the calculus of electoral politics. The Kerala Congress (M), the main plank of the church’s captive vote bank, has split and its backbone has shifted from the Congress-led alliance. The emergence of the Marxists as the domineering political force in Kerala — the party that the Catholic Church dislodged from power in 1958-59 — is not exactly good news for the bishops’ lobby. This also means that Christians no longer vote as directed by the church hierarchy.

On the economic and educational front, the pre-eminence that the church enjoyed in the northern part of Kerala has come under serious challenge from Muslims, who have made significant gains in the last three decades. This is reinforced further by their demographic gains. Muslims are the only community in Kerala to have gained steadily on the population front. They formed 17.5 per cent of Kerala’s population in 1901. The figure rose to 26.56 per cent by 2011. During the same period, Christians grew from 16.3 per cent to 18.3 per cent. It is a widely known secret that the church leaders are keenly mindful of the economic underbelly of demographic shifts. This has been, though unacknowledged, a major determinant in conversion drives as well.

Kerala’s Hindus have registered a steady decline in proportionate terms, falling from 68.5 per cent of the population in 1901 to 54.9 per cent by 2011. This lends teeth to Natesan’s attack on the Christian community for its hypocrisy. Thousands of Hindus — the Ezhavas, in particular — have been, he alleges, lured away from their religious homes.

While church authorities stayed stuck in a past, the state moved on and there is now a climate of awareness wherein uncomfortable questions are bound to be raised. Diversionary tactics like ‘love jihad’ or ‘narcotics jihad’ will not wash anymore. 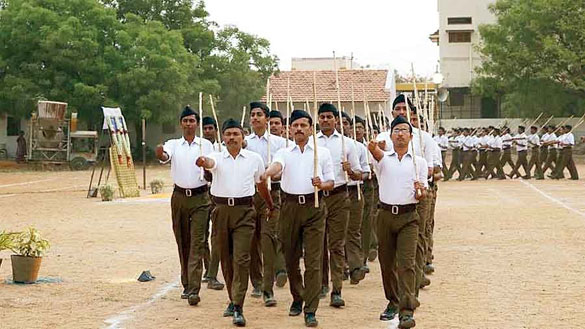 The priest has argued that such narratives are a “highly manipulative way” of pushing more urgent national issues to the back-burner.

A Jesuit priest has warned bishops against falling into “the meticulously planned trap of the Sangh Parivar” by lending credibility to the Right-wing narrative about “love jihad” and adding to it by making claims about a “narcotics jihad”.

Jesuit priest-activist Cedric Prakash has penned the open letter at a time when a Kerala bishop has kicked up a controversy by making the communally loaded allegation that “narcotics jihad” was leading youths of the state to drugs.

The priest has argued that such narratives are a “highly manipulative way” of pushing more urgent national issues to the back-burner.

Stating that there are constitutional guarantees for every adult citizen to choose a religion and for that matter even to marry a person of his or her choice, Fr Prakash has pointed out that there are sufficient provisions in the Code of Criminal Procedure (CrPC) to address forced marriages and kidnapping.

“Unfortunately the utterances of some clearly demonstrate how easily one can fall into a meticulously planned trap of the Sangh Parivar that clearly NEGATES the right to preach, practice and propagate one’s religion/faith. It also reinforces the attitude of the Church towards women — particularly when we have begun talking about SYNODALITY!” Fr Prakash’s letter states.

Synodality is a process of consultations — a devolution of decision-making — between clerics and the laity that is being advocated by Pope Francis as opposed to the existing top-down approach.

Fr Prakash has attached to the letter an article on the “bogey of love jihad” and drawn similarities between Kerala bishop Joseph Kallarangatt accusing Muslims of making Catholic girls victims of “love and narcotic jihad” and former Gujarat chief minister Vijay Rupani saying his government would deal strictly with those who trap Hindu girls and elope with them.

“Both the Bishop and the BJP CM are wrong on several counts — and in fact, their words are patently unconstitutional. Their words are reflective of a patriarchal mindset — which regards an adult Catholic/Hindu woman as a ‘moron’ who is unable to think and decide for herself: be it in marrying the person of one’s choice or for that matter embracing the religion of one’s choice,” Fr Prakash said.

“Secondly, both the Bishop and the CM have absolutely nothing substantive to prove their point: the Bishop is certainly unable to say how many Kerala Catholic girls have married Hindus or people from other faiths; or for that matter just left the Catholic Church. It is exactly the same for the CM.

“The Bishop needs to have the honesty to address the scandals: financial and sexual within the Church; the CM needs to address the dismal state of affairs on every possible front in Gujarat! Both Bishop and CM should also take a visible and vocal stand in championing the rights (particularly, dignity and equality) of women in the Church and Country,” Fr Prakash added.

‘Mixing Of Religion & Politics In Kerala Is Unholy’: It Is In This Backdrop That Fabrications Of ‘Narcotic Jihad’ And ‘Love Jihad’ Flourish