"And let us reflect that, having banished from our land that religious intolerance under which mankind so long bled and suffered, we have yet gained little if we countenance a political intolerance as despotic, as wicked, and capable of as bitter and divisive” --Thomas Jefferson 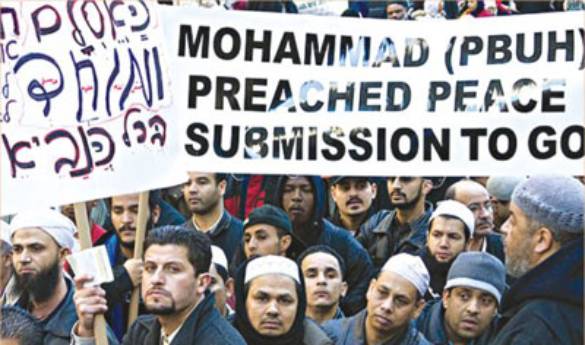 Intolerance -- Wearing Religion on Our Sleeves

The past several years have not been easy for the Muslim World. Apart from the wars that have been fought in many countries, either voluntarily or involuntarily, political unrest in many Muslim countries over the past two years have ushered monumental changes that were unimaginable only a decade before. Autocratic governments and rulers have been ousted from their bastions of power through popular uprising; people power has toppled military might, and democratic rights have replaced autocratic choice. Even though these momentous changes are still a work in progress, the world has hailed the changes in many Muslim countries as great victories in human rights, ending of oppression, and beginning of a new dawn. What is perplexing however is that along with such welcome political changes that were made possible by people power, there has been also a palpable rise of prejudice and intolerance, particularly with respect to one's religion? And this growth in prejudice is not limited to countries which were recently swept by uprisings against their dictatorial regimes, but others that have a relatively more stable political environment.

The most recent example of this growing phenomenon was the outrage and consequent violent acts that swept most of the Muslim countries of the world over the purportedly inflammatory documentary on Prophet Mohammed made by a demented amateur videographer in the US. The documentary was never exhibited anywhere in the world, but a sneak preview was made available by an unscrupulous person on the internet to incite people vulnerable to such provocations. This was enough to ignite protests from the Middle East to Africa, to South and East Asia where people raged in the streets, burnt property, killed innocent people, and demanded death not only of the alleged perpetrator but also punishment of the countries that allegedly sheltered the perpetrator.

Right on the heels of this massive protest sweeping the Muslim countries came another case of indignant protest, this time in Bangladesh, with tragic consequences. As in the case of the derogatory documentary, the ignition of this protest was also effected through the internet and use of social media to propagate a false report of insult to the Prophet by a member of the Buddhist community in a far flung corner of the country. None cared to check the veracity of this allegation. Instead, armed goons launched attacks on the Buddhist minority brethren for their alleged complicity in the alleged insult to the Prophet, burnt their temples and destroyed their property. This attack was unprecedented in the history of the area as the two communities have lived in harmony for centuries there respecting each other's religion and culture. Yet, when all this mayhem was taking place it seems odd that saner elements of the majority community could not stop this violence for fear that they would be seen as supporting the alleged culprit who “insulted” their religion.

A few months before a similar situation occurred in Pakistan. In a village not far from the country's capital, a minor Christian girl was hounded, and jailed, on the allegation that the girl had burnt pages of the Holy Quran. The whole community rose up in arms and the girl was prosecuted on the basis of this allegation of blasphemy that later turned out to be false after police investigation. No one from the majority community bothered to verify the allegations, perhaps from fear that they might appear before their more militant neighbours as condoning this act.

Indignant reaction to insults to one's faith or belief is understandable; but it becomes indefensible when such indignation leads to wanton violence and endangerment of people's lives and property. A couple of years ago a Danish cartoon of our Prophet caused violent reactions in the Muslim countries. However, instead of protests through more civilised means that could be more effective, the rage and anger of the protesters took an extreme proportion causing more damage in the countries where the protests were held than in Denmark.

From time to time we have incidents where individuals or groups either wittingly or unwittingly take to acts that hurt the religious feelings of another community. Unfortunately the reactions in our parts of the world to such gratuitous acts of individuals are often violent, deadly and self-defeating. Instead of addressing a wanton act of provocation by an individual in a clever and more productive and helpful way we project an image of greater intolerance and bigotry with violence.

Intemperate response to perceived affronts to one's religion is one thing, and perhaps can be explained with some stretch to venting of suppressed feelings toward countries that are not considered friendly by some Muslims. But this does not explain intolerance and violence in one's own country not only between practitioners of different faiths, but between sects within the same faith. In the subcontinent we had witnessed much of this intolerance in past decades, both before and after partition fought by communities of two major faiths ostensibly for religious reasons, but in reality for manipulation for political purposes.

Over the last decade or so, however, we have been witnessing intolerances of other kinds that are of a more sinister dimension. People professing the same faith have fought deadly battles with their co-religionists on sectarian grounds. In Pakistan, Sunnis and Shias continue to fight deadly battles for adherence to their mutually different interpretations of the same religion. The most recent case of religious bigotry and intolerance in that country, however, has taken a monstrous proportion. A minor girl in the north western part of the country was struck by a bigot's bullet because she had defied the edicts of the extremists of her own faith against female education. Religiosity has adopted the mantle of monstrosity as people try to impose their own interpretation of religion on others by brute force.

The incidents of intolerance are not restricted to our subcontinent alone. In Egypt, the fanatics raise their arms against fellow Egyptians for their Coptic faith time and again because they suspect the practitioners of this faith are conspiring against their religion. In Nigeria, people of one faith attacked the prayer halls of another faith on suspicion that people of the latter faith were spreading western values and education, which they think will spoil the minds of the people of their faith.

It is a poor excuse to attribute these mindless acts of violence and religious intolerance to only righteous indignation of a community to insults to their religion or conspiracy of another faith against their own. The answers lie elsewhere.

A much deeper cause of such behaviour and intolerance lies in the mindset of a majority of our populations that have been submerged in illiteracy, poverty, ignorance and low esteem for self and community around them. Two thirds of the world's poor live in Muslim majority countries, where nearly half of the world's illiterate also live. The majority of the poor and illiterate mass live in the Subcontinent, parts of the Middle East, and Sub-Saharan Africa where a high degree of youth unemployment, political volatility and vulnerability to religious prejudices co-exist.

Poverty and ignorance have led people in most of these countries to put blame on others for their own failures, distrust of neighbours, and viewing any individual attempt to denigrate their faith as an international conspiracy to subjugate them. The ignorance is not just about other cultures and lack of awareness of other's rights, the ignorance is about one's own religion also. The consequence of the lack of true knowledge about one's own religion and its teachings is that people fall prey to manipulation by religious zealots and political opportunists. No religion teaches violence; no religion teaches how to insult or denigrate other human beings, least of all the religion of the people of the countries we are talking about now. It is an irony that today the practitioners of one of the most tolerant religions of the world are identified with acts that are strongly denounced by their own religion. Yet all these acts of intolerance are perpetrated in the name of religion. People who wear religion on their sleeves need to remind themselves that freedom of religion is the cornerstone of their faith; it is the most fundamental teaching of their religion.

An important condition of freedom of religion is that it should respect the rights of others irrespective of their differences in belief and practices. Yet, the painful events in the countries that have come to the lime light recently demonstrate that these rights continue to be trampled upon by either the majority community in these countries or by groups of individuals who want their thinking to dominate over others. To explain this behaviour as errant or that of an extremist group is a poor excuse. There is something more fundamentally wrong in such behaviour than simply overzealousness of a group of people.

There is no easy way to get out of this morass, and eradicate the disease of intolerance and religious bigotry that exist in the world today. Bigotry exists in one form or another in every faith; but it seems that our share of this opprobrium is the largest given the examples that are often headlined in the press. Each nation and each country has to find its own way to deal with this scourge and get rid of it. The most important first step is to educate people in the rights of all human beings irrespective of faith to their beliefs, cultural and religious practices, respect and tolerance for all shades of opinion, strict adherence to freedom of religion and choices, and stern actions against any attempt to prevent any infringement by anyone of such rights. This education cannot be imparted by teachings in schools alone.

Religious tolerance and respect for all faiths is a part of one's belief system. This is a continuous education that has to be provided to all sections of the society through all media. The spectre of religious intolerance has to be fought by building strong public opinion, the leadership for which has to come from our political leaders, civil society leaders and academics. This has to start from ground zero, from early childhood, and by examples, not just precepts.

Ziauddin Choudhury is a retired staff member of the World Bank.