A Liminal Presence: Sikhs In America 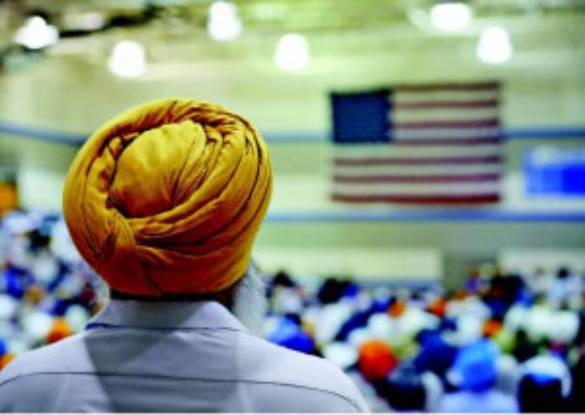 The history of Sikhs in America, it may appear to some, is bookended by violence directed at them. News of the shooting on August 5 at a gurudwara in Oak Creek, Wisconsin, reverberated throughout the United States and beyond. It is reported that the gunman, Wade Michael Page, was an army veteran, had a tattoo commemorating 9/11, and played with white supremacist bands. His motives remain unclear: some argue that 'hate crimes' need no motive as such, as they feed upon a visceral fear of the Other, though many have speculated that Page mistook Sikhs for Muslims. Mainstream American media organisations, such as CNN and Fox News, wasted little time in characterising Page as an anomaly to 'peaceful, mainstream America', and deplored the shooting as a 'tragic mistake' perpetrated 'against the peaceful Sikh community'.

'What we call the beginning, ' T S Eliot wrote in 'Little Gidding', 'is often the end / And to make and end is to make a beginning. ' The end, not unexpectedly, 'is where we start from', but the end so often seems prefigured in the beginning. Indians first started appearing in some numbers on the west coast of the United States and Canada around 1900: though the majority of them were Sikhs, all Indians were commonly described as 'Hindoos'. I suppose we should call this a 'tragic mistake' as well.

Indeed, the US Immigration Commission of 1911 stated that, for purposes of immigration, Indians were to be labelled as 'Hindus'. If, in the old American adage about American Indians, the only good Indian is a dead one, the few hundred (Asian) Indians who had made their way to the US by around 1905 were seen as a menace to American society. 'Hindu Invasion' was the phrase used by one Fred Lockley in the Pacific Monthly in May 1907 to describe the presence of turbaned Indians;a year later, the Overland Monthly would similarly speak about 'The West and the Hindu Invasion'. Eerily, the 9/11 -- in 1907, not 2001 -- edition of the Bellingham Herald carried a headline more than an inch thick, 'British Columbia Threatens to Secede;Horde of Hindus Landing at Vancouver. '

The local press soon took to calling Sikhs 'rag-heads'. In the town of Bellingham in Washington, many were employed as lumbermen, much to the chagrin of white labour leaders who alleged that Indians had stolen their jobs and driven down wages. On September 4, 1907, a large crowd of white men instigated large-scale violence against the Indians. Three days later, the Bellingham Herald, in an article entitled 'Bellingham Sees Last of the Hindus', announced with evident pride: 'Entire Colony is Wiped Off City Map'. The Asiatic Exclusion League would continue to agitate vigorously for keeping America empty of 'undesirable Asiatics', achieving this outcome with the Immigration Act of 1924 that barred nearly all Asians from the US.

It is of course Muslims, not Sikhs, who are today viewed as the undesirable hordes who have invaded America. There is something grotesque in the argument that the shooting of the Sikhs at the Oak Creek Gurdwara was a 'tragic mistake' : if it was a 'mistake', a deviation from the right path, how could it have been any better to have killed Muslims? The Oak Creek shooting raises so many profound questions, beyond those that have been raised about America's endless fascination with guns, the influence that the National Rifle Association exercises in American politics, and the country's subcultures of white supremacy. Since Page turned the gun on himself, should we not characterise him as akin to a suicide bomber? Might that not be one way to ensure that we do not think of countries where suicide bombings have been taking place as strangely barbaric? Had Page been a Muslim, is it not certain that he would have been immediately branded as a 'terrorist' and the country would have been deluged with calls to eradicate Muslim fanatics?

However well Sikhs have done for themselves, they occupy a liminal position in American society, indeed the world over. Even in India itself Sikh secessionism has had much to do, from the 1920s until the movement for Khalistan that peaked in the late 1980s, with disputes over the precise nature of Sikh identity. In the American imagination, 100 years later, Sikhs have been conflated with Muslims. Many Sikhs are bound to feel anxious, troubled, and perhaps even resentful, and will insist upon their distinct identity;some, doubtless, will hold on to the hope that an appreciation of their true identity will alleviate their distress.

The Sikhs have, throughout their history, been wonderfully energetic and marvelously receptive to new cultures. They are, as well, an eminently diasporic people. But what is most distinctive about them is precisely their liminality, even if they should wish to insist upon their distinctiveness. The question 'Just who is a Sikh?' is always lurking on the horizon;even their scriptures have an intricate relationship to both Islam and Hinduism. Even as this liminality makes them vulnerable, it is the source of their greatest strength and wisdom. As the world shows increasingly little ability to live with ambiguity and difference, the Sikhs must remain a beacon of hope to those who wish to resist the painful infliction of certitudes upon an ever greater number of people.

The writer teaches at the University of California Los Angeles.