France Needs to Start Facing Up To Islamophobia

By Valérie Amiraux and Marwan Mohammed

The trigger for the riots in the Parisian suburb of Trappes last weekendwas a relatively ordinary one: the local police stopped a young woman for wearing the full veil in public. Ordinary, that is, since the inception, in April 2011, of Law 2010-1192 of 11 October 2010 prohibiting the concealment of the face in public space, according to which the wearing of this type of garment can lead to a fine of €150 (£129) and a "community rehabilitation programme" in the form of mandatory citizenship classes. Over the course of two years, the police have issued 705 citations. 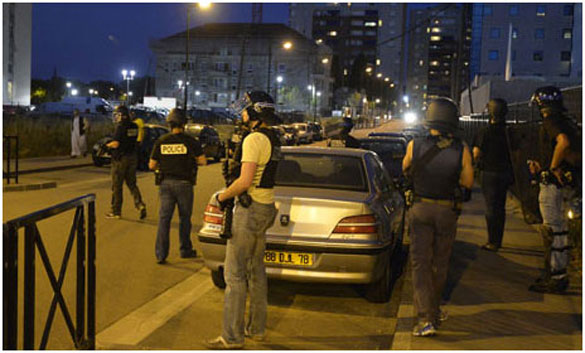 French police from the anti-crime unit patrol the streets in Trappes, a suburb of Paris after rioting as a reaction to the arrest of a veiled Muslim woman. Photograph: Miguel Medina/AFP/Getty Images

In many ways, the arrest in Trappes was routine from the point of view of both the police and the young woman concerned. But it took a bad turn: the young woman and her husband were taken to the station, the Trappes commissioner refused to register the complaint made by the young woman's mother, who was witness to the arrest, and civil unrest erupted over the course of that Friday, followed by numerous further arrests.

The context within which this episode took place is slightly more difficult to untangle. There is an easy tendency, sustained by the media, to accentuate the extreme social precariousness in the French suburbs, the failure of national integration, the continuing problem of the suburbs, regardless of the particular political persuasion of the government in charge. Every one of these colours the context. But there is a new element in play during these incidents in Trappes: Islamophobia.

It shows up in multiple forms: attacks on mosques, desecration of religious sites, the ban on the headscarf in public schools, making it impossible for certain veiled women to access public services, to accompany their children on school outings, the rampant insults, harassment, humiliation, physical and verbal aggression they are subject to, racial and ethnic profiling and discrimination, sometimes culminating in physical attacks, such as the recent one on a veiled woman in Argenteuil, who lost her baby as a result. But the principal characteristic of Islamophobia is that it remains, at least in France, very rarely denounced. It is consistently perceived as an exaggeration, the result of victimised posturing invented by troublemaking Muslims, who are incapable of integrating and bending to the requirements of French citizenship.

In Trappes, Islamophobia has crossed another line of French political history, that of the relationship between the police and the populace, particularly the minority population. The history of the French police is inseparable from the progressive construction of the state. The police force, nationalised and centralised, emerged as a front against regional powers, and subsequently grew its power and influence against the working and anti-colonialist classes over the last century.

The security of the power structure has always taken precedence over the security of everyday citizens: the affirmation or consolidation of the state has subsequently rested on a culture that placed great importance on the maintenance of public order and on the gathering of political intelligence. As a result, there is very little that would create arapprochement between the police forces assigned to minority areas and the inhabitants themselves. This power structure encloses all relations between citizens and police within a rigid framework, characterised by distance and defiance.

Bridging this distance between the populace and the police has been long been identified as a necessity. At the end of the 1990s, the Socialist government attempted to design a police force that would have more contact with and therefore more proximity to the population, an initiative that was quickly thwarted by the right's rise to power and the resistance on behalf of police hierarchies and unions.

Add to this environmental mix the harsh identity checks and brutal police treatment reserved for minorities and the working classes, and it is no surprise that over the past 40 years, the vast majority of suburban revolts have risen out of incidents with the police. The tradition of struggle against police discrimination in France is an old one, and one of its most recent demands – for the establishment of vouchers or documentation during identity checks in order to better fight against the practice of "ethnic profiling" – was taken up by François Hollande during his candidature only for him to abandon it once elected.

The events in Trappes are therefore not restricted to a conflict between the forces for order and Muslims. Nor is it a fight between secularism and the Islamisation of the suburbs. The tensions related to the enforcement of the ban on the wearing of the niqab straddle a much more general history of the relationship between the police and the populace.

Given that we are only a few weeks away from the primaries of the 2014 European and French municipal electoral campaigns, it is imperative that we begin to anticipate the effect that the hardships being endured by the working classes and the continuing stigmatisation of Muslims will have on the electorate.