We Are Not Truly Human Beings, Just Labels and Labels, Positive and Negative, Lead To Stereotypes

Danish philosopher and theologian Søren Kierkegaard famously said, “Once you label me you negate me.” But despite this, it seems that as human beings, we love labels. We spend much of our lives labelling not just others but ourselves as well. Skin colour, race, education level, professional qualifications… you name it, we’ve got it and using it with gusto. Some labels – like doctor, author, and white person – we apply on ourselves with pride, while others – black, dropout, druggie – are pasted on our psyches by others without our consent. It’s also an undeniable fact that labels, positive and negative, lead to stereotypes more frequently than they lead to motivation or greater self-esteem. Yet we continue to label ourselves and others without regard for consequences. A particularly dangerous label in the current national political and cultural situation is religion. As a culture we have started looking at people through “God glasses” – asking people what they believe in, assuming their religious preference based on their accent, colour and most importantly their dress. It’s no longer a private matter, and it almost always results in discrimination.

Every rational person should be against discrimination and bias. Yet these – dare I say it – evils, are rampant and often condoned even today. If you’ve been following my writing on this blog, you know I like to raise my voice against discrimination towards American Muslims in particular. I call out stereotyping for what it is – dangerous and hurtful in a hundred different ways. But sometimes things are more complicated than they seem, and often the grey areas are quite pervasive. Two cases in the news, one in France and the other in the United States, have made very clear to me the need for dialogue and discussion on a national level.

France has been struggling against the assimilation of its minority populations, mostly Muslims, for a number of years. The ban against the Niqab or full veil has led to a deep polarization between the nation’s residents, leading to Muslim women unable to access education and emergency medical services to name just a few. I’ve kept away from that discussion because I feel more qualified to address American Muslims’ rights and challenges. But the news coming out of France this week was interesting to me because it was a result of a misapplication of a label. A Sikh man was denied a passport in 2005 because he refused to remove his turban, and after a lengthy case the UN Human Rights Committee ruled last week that the French government had violated his religious freedom.

To what extent this ruling will have an effect on the French clothing restrictions remains to be seen, but the fact remains that now more than ever people other than Muslims are being negatively impacted by restrictions against religious liberties that were perhaps meant solely to target Islamic practices. Sikhs have tried to appease stereotypes by disassociating themselves from Muslims (many people are unaware that Sikhism is a distinctly different religion than Islam). 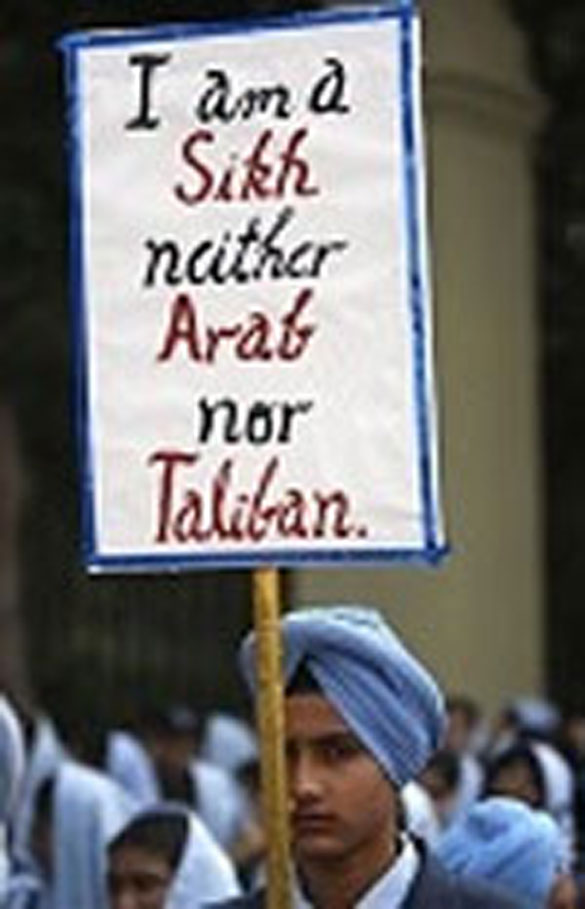 This picture of a Sikh student holding a placard at a New Delhi demonstration appealing to visiting French President Nicolas Sarkozy to allow Sikh students to wear turbans in French schools makes the point better than any words ever could. It seems that these days everyone considers Muslims in the western world to be an alien species, and for that, they alone should be victimized by discriminatory policies. What the Muslim world has already learned however is that it’s difficult to control the monster of discrimination once it rises to power and ultimately everyone becomes a target.

Similarly in the United States last week a Muslim girl was refused a student ID at Hampton University because she was wearing a headscarf. Needless to say, there has been an immediate uproar in the American Muslim community about this supposedly blatant discrimination and curtailing of religious freedom. I, however, beg to differ. This student’s case, although unfortunate, is not the same as, say Abercrombie & Fitch who fired a Muslim girl for wearing the Hijab. Hampton University already had an established dress code, and I personally believe that it is students’ responsibility to be aware of any policies that may adversely affect them. Staff members are not at fault for enforcing said policies no matter how ridiculous they may seem. My position remains that if an institution of higher education has a policy against headscarves, Muslim students and their lawyers can easily challenge the policy at an institutional level. Contacting the media and making the situation a publicity nightmare for everyone concerned really doesn’t help matters. The reality is that Hampton University actually allowed Muslims to keep their Hijab for a photograph if – and this is what enraged many – they could prove that they are indeed Muslim.

What an interesting conundrum. Aren’t matters of faith supposed to be above suspicion? Wouldn’t it have been easier to bring in a Bible (or Quran in this case, and ask the poor girl to take an oath)? Of course to some, that would have been equally offensive. It seems to me that this policy – and the solution offered – wasn’t thought through all the way. After all, does it make sense for a non-Muslim, or even a Muslim woman who doesn’t wear the Hijab, to cover herself just to irritate university employees or hold up a line? What would be the possible motive for wearing the hijab in hot weather, facing ridicule and prejudice from everyone around, if one didn’t in fact believe in it?

The second issue I have with this case is this: how does one actually prove what’s in one’s heart? For someone who worships at a mosque regularly, and is well-known to the administration, they could obtain a certificate like this girl did. But what of the millions of American Muslims who don’t visit mosques, either because of distance or preference? How do they prove their religion? For that matter, how do people of any faith prove what they believe, and should they even be asked to? The whole situation is mindboggling, but I must admit that this was a slightly more creative solution than, say the DMVs that refuse to issue Muslim women wearing the Niqab their drivers’ licenses.

The bottom line is that we in this country, as well as in others with burgeoning Muslim populations, must start a dialogue, come up with solutions that allow us to move forward together and stop discriminating against each other based on labels. We cannot keep denying groups of people drivers’ licenses or student IDs or public services based on what’s on their heads or in their hearts. We must start talking, to figure out what can be done to balance safety and civil liberties, democracy and religion. Until we do that, we are not truly human beings, just labels.