How To Unlearn Naturally Inherited Islamophobia 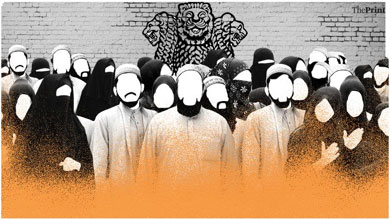 The outrage over the level of hatred that was on display in northeast Delhi this week is surprising. Why? Because all of us, including me, inhabit a world where our first interactions with the words ‘Muslim’, ‘Islam’ are shrouded within whispers of hate, discomfort, contempt and blatant phobia.

These reactions to Muslims infect all of us. I too was caught in its vortex. And I have had to unlearn my naturally inherited Islamophobia, one step at a time, over the years.

Two days ago, an acquaintance of mine was recounting how a Muslim woman in a burkha was abused by a man, for no apparent reason other than the fact that she was ‘obviously’ Muslim. At that point, I wanted to ask my friend why she didn’t intervene. But I stopped myself. Because not too long ago, I didn’t stand up for a Muslim either.

I was about 7. We were playing during the ‘games’ period at school. My Muslim friend pushed someone. “You freak, you terrorist,” pat came the reply from the aggrieved kid. I halted; I knew something was wrong. But peer pressure was a pretty big thing at that point. I joined in the laughter.

I am still ashamed for giving in.

There were several such uncomfortable incidents. I look back today and can only define them as Islamophobia.

In my eighth grade, I had a Pakistani Muslim friend — a double whammy in this country. And I did not make things easier for her; it was just so uncomfortable for me to hear about her country, her people, even her life. Although her life was exactly like mine, I still pitied her. And I could not hide it.

I caged her in a stereotype. She was a Muslim, her parents would marry her off early, she would never be able to follow her dream. I took it upon myself to show her that there was an alternative to her ‘regressive’ religion. Spoiler alert: None of that happened.

When she had had enough, she confronted me for being an absolute hypocrite and being discriminatory. I was aghast, how dare she? I was only looking out for her. But we all know I wasn’t. She was part of a terrifying ‘other’ and I had the saviour complex, which many of us have, about things we have no idea about.

Our schools never made an active effort to educate children about Islam. Even as I grew up and came to terms with the fact that I had been taught and brought up in a way that made me wary of people who were unlike me, I realised that even higher education required active effort to engage with people belonging to other communities.

It was only when I officially entered the field of humanities in Class XI that I became familiar with something called ‘nuance’. I learned about a new section of history that was until then cloaked from me — about Muslims, their struggles, their narratives, and their traditions.

However, the way textbooks talk about Muslim history was something that required critical faculty. CBSE glorified Rajput losers and demonised Mughal victors — just your classic government-sanctioned education system. Had it not been for some wonderfully sensitive history teachers, I definitely would not have been proud of the person I am.

Conversations in families and among friends, popular culture and media are always instilling in us this discomfort with Muslims and Islam. It would, in fact, be a surprise if one doesn’t absorb it. That is the natural thing. Education and deliberate introspection are what make us question these ideas and strive to shed them. It is a work in progress.

Even during college, when you are supposedly at the peak of your intellectual journey, I was a victim of my bias and fears. The greatest tragedy of the ‘liberal’ education, especially liberal feminist education, is that we discount individual agency.

Something that a Muslim female activist said in college has stuck with me — “Everyone around me believes that I am oppressed and is hell-bent on making me aware of my own oppression. And no one cares about what I am saying.”

This is precisely the crux of my unlearning — shutting up and listening.