2. The Israeli police erected amphitheatre like barricade to prevent them from going to mosque.

3. The Jews chanted "Death to Arabs".

4. 8 Palestinians were injured and were taken to hospital.

5. European countries like France have eased restrictions on Nuslims for Ramadan but Israel did the opposite. 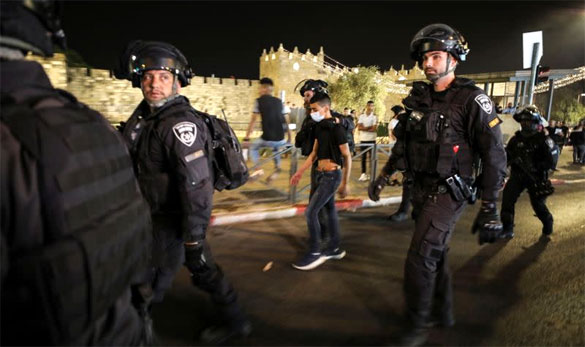 Last week Palestinian youth clashed with Israeli police in East Jerusalem as they were prevented from gathering in the evening for their special Ramadan prayers. The clashes have occurred nightly since the onset of Ramadan on April 13.

A report by Stephen Farrell of Reuters said,

"East Jerusalem was on edge just after midnight on Saturday as Palestinians faced off with Israeli police in nightly Ramadan clashes that sparked rocket fire by militants in the Gaza Strip and protests in Palestinian towns across the occupied West Bank."

Soon Hamas joined the Palestinians and fired three rockets, Reuters quoted Israeli military as saying. According to the report,

"Palestinians say police have tried to prevent them from holding their usual Ramadan evening gatherings outside Damascus Gate by erecting metal barriers in its amphitheatre-style plaza."

However, an Islamophobic website Jihad Watch published a report on the happening from a Islamophobic angle on 17th April. The report begins with the title:

The report begins as follows:

"Palestinian militants in Gaza fired around three dozen rockets into Israel overnight, while the Israeli military struck back at targets operated by the ruling Hamas group."

It is evident from the Reuters report that Palestine youth clashed with Israeli police because they had imposed curbs on evening gatherings when they tried to enter the mosque for their special Ramadan prayers but Jihad Watch does not mention the reason for the clash and creates the impression that Palestinian youth attacked the Israeli police without any provocation. It also misleads the readers by saying the Hamas fired 36 rockets out which 6 were intercepted while others fell in open areas, whereas the Reuters says that the Hamas fired only three rockets till that day.

Another flaw in Jihad Watch report is that it quotes Tor Wonnesland, UN envoy to the region as saying, “The indiscriminate launching of rockets towards Israeli population centres violates international law and must stop immediately." The fact is that the name of the UN Co-ordinator is Nicholay Mladenov and not Tor Wonnesland. Mr Mladenov also criticised thd Israeli government for restrictions and causing a health disaster in Gaza strip.

The fact is that the name of the UN Co-ordinator's name is Nicholay Mladenov. JW does not quote his statement criticising Israel's restrictions in Gaza Strip leading to a humanitarian crisis. According to the UN News, "He elaborated on security, humanitarian and political crisis in the enclave including restrictions that are contributing to an ongoing health disaster in Gaza strip."