There's Nothing Un-Australian About Taking an Oath on the Qur'an 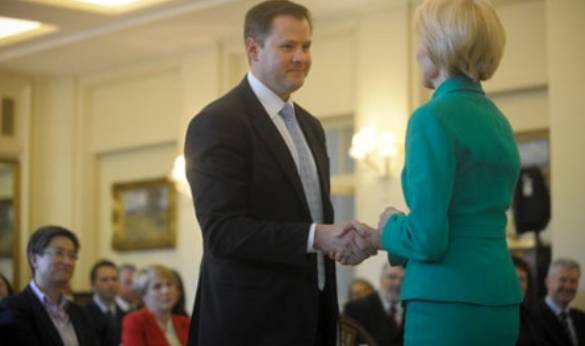 Parliamentary secretary to the Prime Minister Ed Husic is sworn in at Government House in Canberra. Photograph: Lukas Cock/AAP

Whilst many celebrated his appointment as a momentous occasion – none more so than our own governor general Quentin Bryce, who said that “this is a wonderful day for multiculturalism and everything it stands for in our country” – others used it as an opportunity to unleash vitriol on Husic’s Facebook page, focusing particularly on his decision to be sworn into his parliamentary role by making an oath on a hard copy of the Qur'an.

The bigotry extended far beyond Facebook. Some went so far as suggesting that the “governor general should be dismissed for acting unconstitutionally in allowing a parliamentary officer to swear allegiance to racist Arab supremacy – rather than the Australian people and our laws”. Many, in return, expressed shock and outrage at how vile some comments aimed at Husic were. But whilst the bigoted commentary was truly despicable were they shocking? I, for one, was sadly not surprised.

As much as I despise playing the "victim card" and harping on about the ongoing religious and racial vilification faced by Muslims in Australia, there is no doubt in my mind that the real root cause of the vitriol aimed at Husic, is a far deeper social malice - Islamophobia.

Sadly, whether it’s Muslim minarets or the notion of Islamic banking, any concept even remotely connected to Islam and Muslims seems to elicit a completely irrational fear.

Husic’s historical promotion should have served as a reminder that we live in a nation where equal opportunity is afforded to all. It should have served as a reminder that a fundamental strength of our democracy is freedom of religion, and that our parliament is slowly but surely on its way to becoming truly representative of all Australians – although I note that women and ethnic minorities are still underrepresented.

Sadly though, the discourse was hijacked by keyboard warriors who so ignorantly tried to suggest that “Australia is a Christian nation” and that Mr Husic’s actions were “unconstitutional”. They clearly lack a basic understanding of the rights afforded to all of us under Australia’s constitution.

Australian parliamentarians are free to use whichever holy text, or none at all, to be sworn into their positions. In fact, our politicians have been given the option since Federation in 1901. Our previous prime minister, Julia Gillard, made an affirmation of allegiance instead of swearing her oath of office on a holy text. Australian Jewish MPs Josh Frydenberg and Michael Danby were sworn in on the Torah in 2010. I do not recall any such fuss being made then.

So where does this social malice stem from? For over a decade, Australian Muslims have had to live through a climate of mistrust and hostility. Although I’d be the first to admit that there have been significant improvements, we still have a long way to go. Islamophobia has been one of the most challenging impediments to social and community cohesion in Australia.

Australian Muslims who, despite being mostly born, raised and educated in Australia, still feel like their identity is being constantly questioned. If the sentiments on social media are any sort of indication, then I personally feel this on a very regular basis. Whether it’s being called a “rag head”, told to “go back to my own country” or people wishing that “my refugee boat had sank at sea” (I came by plane, by the way), the vitriol is unrelenting and deeply hurtful.

It was only yesterday that I was asked about how many “genuine non-Muslim friends I have or associate with”. And hours before that, I was criticised for supposedly being afforded an education opportunity before “our own” and that it “was the public purse that enabled [my educational] opportunities”. Little do they know that like everyone else, I had to work tirelessly (including studying full time and working full time at one stage), to make my way through my combined law and economics degree.

Is it not "un-Australian" to continuously question other peoples' levels of "Australianness"? Perhaps I’m stating the obvious, but being a good Australian and a good Muslim are not mutually exclusive concepts. What becomes further apparent in this sad saga is the utter irony of the criticisms often thrown at Australian Muslims; that they don’t assimilate or contribute to our society.