Jacqui Lambie has redoubled her attack on supporters of Islamic Sharia law, telling Parliament they are "maniacs and depraved humans" who will not stop committing "cold-blooded butchery and rapes until every woman in Australia wears a Burqa".

The Palmer United Party senator has expressed strong views on the "evil" of Sharia law, but on Sunday struggled to explain what it was during an interview on the ABC's Insiders program. 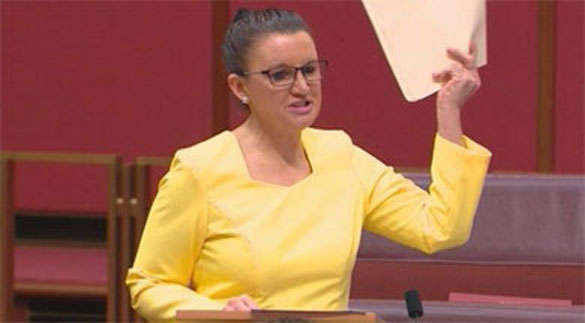 In a lengthy speech in Parliament on Monday, Senator Lambie acknowledged her difficulties in articulating theology.

"It's not going to come as a shock when I tell you that I am not an Islamic scholar," she said, before blaming Sharia law supporters for "every major terrorist attack on the Western world".

"The 9/11s, the Bali bombings, Boston marathon bombings, recent beheadings and massacres have all been carried out by supporters of sharia law," she said.

Again demanding that Sharia "supporters" leave the country, Senator Lambie advised "innocents" in the community to realise "these thugs and extremists will not stop their acts of terrorism and depravity until their way of life, their culture and their law is imposed on Australia, indeed the whole world".

"It's about time we faced the fact that these maniacs and depraved humans will not stop committing their cold blooded butchery and rapes until every woman in Australia wears a Burqa and is subservient to men," she said.

Senator Lambie has faced widespread criticism for her hard-line anti-Sharia statements, including from her own party leader Clive Palmer.

"We are a rich & diverse nation who enjoys a special country," he said.

"Challenge is dealing w/budget & measures that attack the fabric of society. We must think about who & what we are & where we want to go.

"We have strong obligations towards each other. We have lots in common, we love our families, freedom & our efforts to help each other."

Fears comments will stir up Islamophobia

Jamila Hussain, an Islamic law expert from Sydney's University of Technology, said sharia was a "way of life for most Muslims" that dictated things like religious duties and ethical conduct.

She said "patriarchal customs which have oppressed women" were dictated by cultural practices, not Islam, and added that sharia should not be confused with the ideology of Islamic State (IS) extremists.

"The leaders in the Muslim community have been coming out and saying that, and it still doesn't seem to be getting through to politicians," she told ABC News Online.

"And it's women who become the victims of Islamophobia.

"This kind of behaviour stirs up Islamophobia and then we find that Muslim women are walking down the street, minding their own business, pushing their children down the street in a stroller or something, and they're being attacked by racists and very bad members of the public.

"And it's simply not fair."

'It's their choice' to wear a Burqa

In the Insiders interview on Sunday, Senator Lambie was unable to explain Sharia law and said it involved terrorism.

"Well I think when it comes to Sharia law, to me ... it obviously involves terrorism ... involves a power that's not a healthy power," she said.

Some commentators described the interview as a "train wreck", ABC political reporter Andrew Greene said, while others likened Senator Lambie to former One Nation leader Pauline Hanson, who famously responded "please explain" when asked if she was xenophobic.

The interview came after Senator Lambie posted a photo to her Facebook page of an Afghan policewoman shooting a gun while wearing a Burqa with a caption calling for the garment to be banned.

The policewoman, Malalai Kakar, was Afghanistan's first female police officer and was well known for her stance on women's rights. She was gunned down in her car by the Taliban in 2008.

The post was widely criticised, including by the photographer who took the image in Afghanistan, Lana Slezic, who labelled it appalling and insulting.

Ms Hussain said it should not be for Senator Lambie to dictate what another woman could wear.

"I think there are very few women who wear what you call a Burqa in Australia; there are a few who wear a face veil. In every case, it is their choice," she said.

"I've never come across a situation where a woman was wearing a face veil because her husband or some other male relative forced her.

"It's their choice. They want to do it because they feel it makes them more pious, or because it is a symbol of identity or because it's something that all the women in their family do.

"It ought to be a matter of a woman's choice what she wears. Jacqui Lambie really needs to understand that."

Greg Jennett is a political correspondent