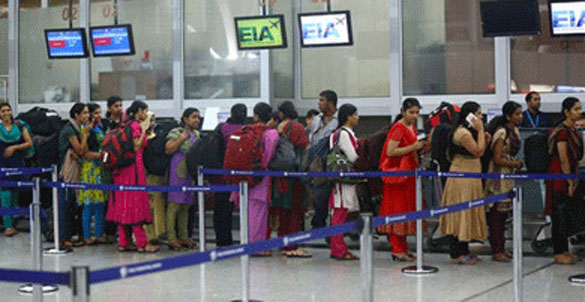 Indian Nurses who were trapped in territory Captured by Islamic Militants wait for the plane to begin their journey home at Irbil International Airport, Iraq AP Photo

•  The fight over Egypt's mosques: The state vs the pulpit

•  Former Iraq parliament speaker ‘to step aside’ so Maliki can go

•  I pray for Pakistan to be free of terrorists soon: Altaf

•  Fazlullah is in Pakistan: TTP

•  Baby steps: Law and order on the mend in K-P, says police report

•  Kashmir neither ‘Jugular Vein,’ Nor ‘Integral Part of either Pakistan or India’:  APHC

•  Kashmir is a ‘disputed territory’: Pakistan

•  ISIS a cause for concern, says Mirwaiz Farooq

•  PM Sheikh Hasina: Violence not allowed in the name of agitation

•  Amnesty: A year after Morsi, Egypt 'failing on every level' in terms of human rights