Saudi Cleric Raped and Murdered His Daughter, Five, Because He Doubted Her Virginity 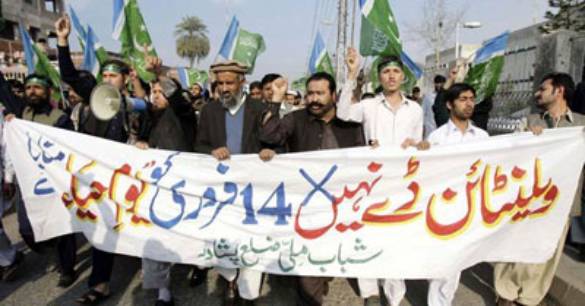 •  Saudi Cleric Raped and Murdered His Daughter, Five, Because He Doubted Her Virginity

•  World must allow Syrians to 'defend themselves': Saudi foreign minister

•  After Muslim rebels seize two priests in Aleppo, there are fears for their life

•  Have taken refuge in Indian HC in Maldives, tweets Nasheed

•  Afghan Taliban dismiss reports of meeting with Fazl ur Rehman

•  Pope front-runner reached out to Muslims while in Vancouver

•  Occupation escalates its attacks in the Al-Aqusa Mosque

•  For Pakistan, Benedict XVI was a bulwark of religious freedom

•  Your enemy is our enemy says Cameron to Pakistan

•  Canada won’t ‘get into another Afghanistan,’ Baird says of Mali conflict

•  Obama announces to withdraw 34,000 US troops from Afghanistan

•  Obama tells Iran it's time for a diplomatic solution

•  ‘Ban all Muslim men from flights’: A New Zealand politician

Photo: Activists of the student organisation Shabab Milli chant slogans against Valentine’s Day at a protest at the Peshawar press club

Saudi Cleric Raped and Murdered His Daughter, Five, Because He Doubted Her Virginity

A Saudi celebrity cleric who allegedly raped and murdered his five-year-old daughter has claimed he injured her because he doubted she was a virgin.

Fayhan al-Ghamdi admitted using a cane and cables to inflict the horrific injuries after doubting his daughter’s virginity, according to the campaign group Women to Drive.

After the case attracted international attention, members of the Saudi Arabia's Royal Family are now believed to have blocked al-Ghamdi's release and ensured that a stronger sentence is upheld.

Women to Drive said the preacher, a regular guest on Muslim television networks, had his daughter checked up by a medic after doubting her virginity.

It has been alleged that she was repeatedly raped and had been burned to cover up the injuries she had sustained from the horrific sexual abuse.

Yesterday Sayeda Hamadari, the girl’s mother, who is divorced from the cleric, said she wanted her ex-husband to be put to death, reported The Times.

'I want him killed. I want the full Islamic punishment. This is God’s law,' she said yesterday.

'I am in constant pain when I think of what he did to my daughter. I cannot bear to think of it. I have been reading the Koran to seek some comfort. Only God knows what I am going through.'

She is divorced from al-Ghamdi who remarried and has two more children, and claims the torture happened whilst Lama was in her father’s care in March last year.

It was previously reported that Fayhan al-Ghamdi had been released after paying ‘blood money’ to Lama’s mother.

Albawaba News reported the judge as saying: 'Blood money and the time the defendant had served in prison since Lama's death suffices as punishment.'

But the Saudi Justice Ministry responded saying that the cleric was still in prison and that the case was continuing.

The death penalty is thought to be unlikely in this case.

Lama’s stepmother is appearing as a witness to the murder at another hearing tomorrow according to Ms Hamadari.

‘My dear child is dead, and all I want now is justice so I can close my eyes and know she didn't die in vain,’ Sayeda Hamadari told CNN, adding that her daughter was ‘brutally tortured in the most shocking ways.’

‘The state needs to even consider taking his two children from him and his wife away because I fear for their lives,’ she added.

'These are not some unfounded accusations, but everything is based on the medical examination by the hospital and the team of physicians who treated Lama when she was first admitted.'

Randa al-Kaleeb, a social worker from the hospital where Lama was admitted, said the girl's back was broken and that she had been repeatedly raped and her injuries burned.

Activists say under Islamic laws a father cannot be executed for murdering his children.

Husbands can also not be executed for murdering their wives, the group say.

Three Saudi activists, including Manal al-Sharif, who started the women's right to drive campaign, have raised objections to the case as it highlights the urgent need for legislation to protect women and children from domestic abuse.

Manal al-Sharif has launched a campaign on Twitter using the hashtag 'Ana Lama', which is translated as I am Lama, calling for an improvement on the judicial treatment of women and children.

Local reports say public anger in Saudi Arabia is also growing and authorities have said they will create a 24-hour hotline to take calls about child abuse.

Anti-riots police have surrounded the Indian High Commission here after former President Mohamed Nasheed went there, soon after an arrest warrant was issued against him by a Maldivian court.

The former President, who is due to attend a hearing regarding his detention of Chief Judge of the Criminal Court Judge Abdulla Mohamed in January 2012, was inside the Indian High Commission at 1:00 PM this afternoon following the announcement of the court order.

Police have set up barricades around the High Commission area.

The former President was on an visit to India after being granted permission to depart the country by the court.

Despite his permitted travel period expiring on February 9, Mr. Nasheed arrived back in Male on February 11, Minivan reported.