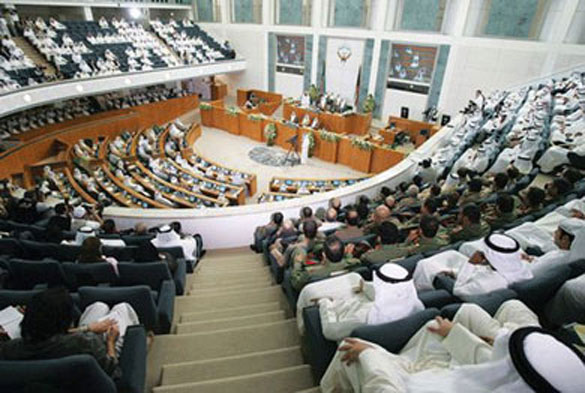 •  Advani must be tried for Babri Masjid conspiracy: CBI to SC

•  Italy: 70, 000 converted to Islam, says the Union of Islamic communities

•  US drone attack kills 9 in Pakistan

•  US brushes aside Pakistan's objections, to continue with its drone strikes

•  Pakistan, US working on text of US apology for NATO air strike

•  Pakistan is our enemy: US lawmaker

•  Break in Lyari operation should not be taken as weakness: Qaim

•  At War Over Siachen Peace

•  Trying to Mold a Post-Assad Syria From Abroad

•  South Sudanese refugees to be airlifted out of Sudan

•  Syrian opposition leader heads to China for talks amid violence

Photo: Kuwait’s parliament approved a law imposing the death penalty on any Muslim who insults God

By Fiona MacDonald and Dahlia Kholaif

Kuwait’sparliament approved a law imposing the death penalty on any Muslim who insults God, his prophets, messengers, Prophet Mohammad’s wives or the Koran, in any form of expression, if they don’t repent.

The bill, which adds articles to Kuwait’s penal code, was passed today by 40 lawmakers, including all Cabinet ministers present, and rejected by five Shiite Muslims as well as one liberal lawmaker.

“Islam is a religion of tolerance, peace and acceptance, but that doesn’t mean it should be stepped on,” lawmaker Ali al-Deqbasi told the house before the vote. AbdulHamid Dashti, who voted against the bill, said the law “should be broadened to criminalize those who insult all beliefs and faiths.”

According to the law, judges must give defendants the option of repenting, which, if taken, reduces the sentence to at least five years in prison and a fine of 10,000 dinars ($36,000). Non-Muslims will be sentenced to 10 years in prison if convicted of violating the law, which will take effect after signed by the emir and then published in the Official Gazette within a month ofparliamentary approval.