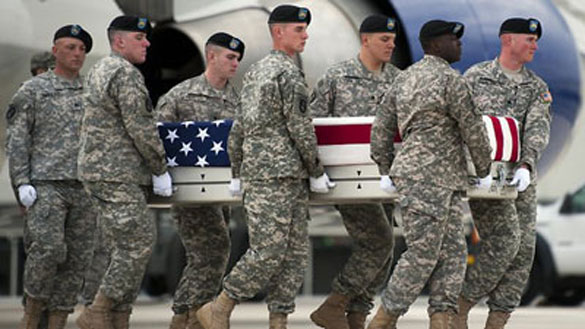 •  Kuwait hangs three, including Pakistani, in first executions since 2007

•  Islam Zindabad Conference: ‘Fazl ur Rehman is no American agent’

•  ‘Alternate to Islamic studies is a constitutional right’

•  Four arrested for setting a boy on fire

•  Hope for Pakistani expats to cast votes as software is ready

•  Discharged IM co-founder to be called as defence witness

•  How children's TV favourite Sesame Street tones down for Afghanistan

•  Britain must “acknowledge what is really happening in the Maldives”: Salisbury MP

•  Rising from the ashes, Islamic centre a symbol of tolerance

•  Mob Violence in Indonesia a Sign of Erosion of Trust

Photo: The body of Sergeant Michael Cable, 26, is transported home via Dover Air Force Base, Delaware. Cable was killed in Afghanistan by a local teenager. Picture: Cliff Owen

Sufi orders in Egypt are to form popular committees to protect their shrines and mosques from "radical Salafists," a Sufi leader has said.

Alaaeddin Abul-Azayem, founder of the Azamiyya Sufi order, made the announcement on Sunday, hours after a Sufi shrine and mosque were torched in the city of Tala in the Nile Delta's Menoufiya governorate.

Abul-Azayem, who heads one of the largest Sufi orders in Egypt, accused "radical Salafists" of attacking Sufi shrines and festivals.

"If any Sufi shrine is demolished, all of Egypt will not be silenced whether Sufi or not," he added.

A fire ripped through the Sheikh Fouad shrine and mosque in Tala, to the north of Cairo, for almost two hours on Sunday, destroying the contents of the mosque but leaving the structure of the shrine intact.

In April 2011 fire erupted at Sidi Ezzeddin mosque and shrine in the same city. Nobody was charged over the incident but locals blamed radical Islamist groups.

There are estimated to be at least six million Sufis in Egypt.

The Al-Yawm daily on Monday cited an unnamed official from the powerful religious police as saying women can ride bikes in parks and recreational areas but they have to be accompanied by a male relative and dressed in the full Islamic head-to-toe abaya.

Saudi Arabia follows an ultraconservative interpretation of Islam and bans women from driving. Women are also banned from riding motorcycles or bicycles in public places. The newspaper didn't say what triggered the lifting of the ban.

The official says women may not use the bikes for transportation but "only for entertainment" and that they should shun places where young men gather "to avoid harassment."

Iraqi officials said seven people were killed in attacks in the capital and in the western city of Fallujah on Sunday, including a mosque preacher who was gunned down outside a sweets shop.

A police officer said assailants shot dead the preacher, Sheik Talib Zuwayid of the Al Baraa mosque in Fallujah, along with his nephew and another man. A health official confirmed the deaths and said another man was injured.

Residents said Zuwayid was one of the organizers of weekly Sunni demonstrations against the Shia-led government that have been taking place for the past three months. The police officer however said it was unclear if the killings were related to the protests.

Immediately after he was killed, residents hung up posters announcing the man’s death on Fallujah’s main road. The officials spoke on condition of anonymity because they weren’t authorized to release information.

In the Iraqi capital, two separate explosions killed four people and wounded 14. Two police officers said a bomb attached to a policeman’s car exploded early Sunday morning in the capital’s northern Kazimiyah neighbourhood, killing an officer and a bystander and wounding five others.

In another incident, two other police officers said a suicide bomber rammed an explosives-laden car into an army checkpoint in Baghdad’s western suburb of Abu Ghraib, killing two soldiers and wounding nine people, of which four were civilians.

All officials spoke anonymously, as they were not authorized to release information.

Police and military personnel are favourite targets of militants seeking to undermine the Iraqi government’s efforts to maintain security.

TIKRIT, Iraq: A suicide bomber blew up a tanker truck at police headquarters in the Iraqi city of Tikrit on Monday, killing seven people and wounding 11, police and medics said.

Most of the casualties in the 8:40 am (0540 GMT) attack in the city, which was the hometown of executed dictator Saddam Hussein and remains a focus for insurgents, were police, the sources said.

Thousands of people on Sunday have taken to the streets in the Moroccan capital, Rabat, to protest against the country’s high unemployment rate and cost of living.

Protesters marched through the city ahead of plans by the Islamist-led government to push for social and economic reforms.

Al Arabiya TV correspondent Adel Zobairi said about 30,000 protesters gathered in the kingdom's capital, calling for the downfall of Islamist Prime Minister Abdel Ilah bin Kiran. One of the slogans raised in the protest was: "People rise up against bin Kiran the dictator."

“Morocco is witnessing social regression,” chanted protesters, including activists from the February 20 pro-reform movement, which was born of the Arab Spring protests sweeping the region in 2011.

Kuwait hangs three, including Pakistani, in first executions since 2007

KUWAIT CITY: Authorities in Kuwait on Monday hanged three convicted murderers in the first executions in the Gulf state since May 2007, the ministry of justice said.

The men, a Pakistani, a Saudi and a stateless Arab, were hanged at the central jail, west of the capital Kuwait City, in front of judicial and security officials, the ministry said.

The Pakistani was convicted of killing a Kuwaiti couple and the Saudi of murdering a compatriot.

The stateless Arab was hanged for killing his wife and five children after claiming he was a long-awaited imam.

The news agency SANA said on Sunday that the fires would cause a daily loss of 4,670 barrels of oil and 52 cubic meters of natural gas. It accused "terrorists", the

government's term for rebels, of setting the fires after fighting among themselves over how to divide the oil.

CAIRO — An Egyptian television satirist who was summoned by prosecutors on charges that he had insulted President Mohamed Morsi was ordered to post bail on Sunday, indicating that the authorities were continuing to pursue their investigation of the popular host.

After presenting himself to prosecutors on Sunday morning for questioning that lasted several hours, the satirist, Bassem Youssef, paid the equivalent of $2,200 bail and was released. Prosecutors had issued an arrest warrant for Mr. Youssef on Saturday on charges stemming from statements he had made on his widely watched television show, including that he had insulted Mr. Morsi, denigrated Islam and disturbed public peace.

CAIRO: Egyptian President Mohamed Morsi referred a law allowing the state to issue Islamic bonds to a panel of top Muslim scholars on Sunday, state media said, a step that could complicate the government's plans to pass the legislation.

The parliament led by the Muslim Brotherhood's Freedom and Justice Party approved the law earlier this month and referred it to Mursi, triggering a protest last week by Al-Azhar, the country's leading Islamic authority.

Saudis across the Kingdom have welcomed the new Shoura Council proposal to increase end of service benefits (ESB) of civil servants, saying it would encourage public servants to work hard and improve the living conditions of retirees.

A Shoura meeting, chaired by Vice President Muhammad Al-Jafri, approved the proposal made by a former member Ehsan Abdul Jawad and instructed the Human Resources Committee to study the matter further.

“The majority of Shoura members supported the proposal to amend Article 53 of the Civil Service Law that deals with rights and benefits of civil servants,” said Fahad Al-Hamad, assistant to the president.

A committee has been formed to list the columns and calligraphy of the Makkah Grand Mosque prior to their delivery to the Museum of the Two Holy Mosques, said Muhsen Al-Sullami, director general of the museum.

Al-Sullami could not come up with an exact number for the engravings and columns. However, he said that the committee has been listing and enumerating the objects for three months.

“The museum will be expanded in the next phase, and this will increase the number of objects shown and the number of visitors to the museum,” he said.

MANAMA, Bahrain (AP) — Bahrain's news agency says an appeals court has confirmed a 10-year prison sentence against a man convicted of spying for Iran. The Gulf kingdom has long accused Tehran of aiding an anti-government uprising in the Arab country.

No clear evidence has been made public about alleged Iranian roles in the more than two-year unrest but Tehran officials have often denounced crackdowns on Shiite-led protesters by Bahrain's Sunni leaders.

DAMASCUS, Syria (AP) — A Syrian antiquities official says a historic Jewish synagogue in Damascus has been damaged and looted as clashes between government troops and rebels have consumed the surrounding neighborhood.

Maamoun Abdul-Karim, head of the Antiquities and Museums Department of the Syrian Culture Ministry, said Monday that objects from the Jobar Synagogue were stolen last year, but that officials haven't been able to visit the building for months because rebels control the area.

Activist videos posted online last month show damage to its walls and roof that appears to have come from shelling. The videos appeared authentic and corresponded to other reporting by The Associated Press.

The synagogue was built in honor of the prophet Elijah. A plaque near its door says it dates to 720 B.C.