The Melancholy in Muharram 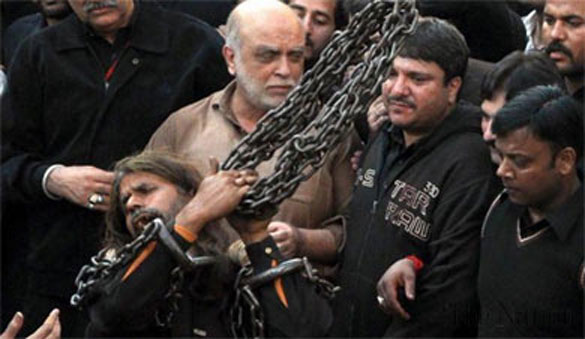 Muharram, the first month of the Islamic calendar is upon us, and the muslim community will no doubt engage in observing and respecting it given their own individuated leanings and religiosities. Melancholy isn’t exactly a word on anybody’s lips during the start of the Islamic year. But there is no doubt that Muharram will force us to pay more attention to it. Even seek it out from time to time.

Melancholy is a genus of sadness that emerges when we are open to the fact that life is intrinsically difficult and that suffering and disappointment are a core part of the universal experience. Melancholy is not a mental disorder that needs to be cured. Melancholy is not despair or hopelessness. To define melancholy - the dominant condition in Muharram - is to reduce a noumenon into a phenomenon; which makes it a philosophical task - at best difficult and at its worst impossible for this writer given this space. A possible definition of melancholy can be borrowed from the Cuban-Italian writer, Italo Calvino, for whom melancholy is the “sadness that has taken on lightness.” If you ever go out looking, you shall find that there are melancholic skies, melancholic faces, times of day, literatures, and pieces of music. And with Muharram, a melancholic period too will be added to this non-exhaustive list you make.

Another claim that will become self-evident to you is that the ‘contemplation of the sad’ is not unique to us, remnants of the genus can be traced to other cultures and languages; for example, saudade is a word in Portuguese and Galician (from which it entered Spanish) and claims no direct translation in English, describes a deep emotional state of nostalgic or profound melancholic longing for an absent something or someone that one loves. Moreover, it often carries a repressed knowledge that the object of longing might never return. A stronger form of saudade might be felt towards people and things whose whereabouts are unknown, such as a lost lover, or a family member who has gone missing, moved away, separated, or died. In Brazil, the day of Saudade is officially celebrated on 30 January.

Muharram, which moves from year to year when compared with the Gregorian calendar, gives us this allowance, too, to contemplate the suffering, pain, sorrow, shame and grief intertwined in the human condition. To take them fully to heart is to become more compassionate because “If we could read the secret history of our enemies, we should find in each man’s life sorrow and suffering enough to disarm all hostility.” In our collective grief we can find collective compassion, and realise as Nietzsche did, that we are, after all, “human, all too human.”

Civilisation now - with its conspicuous consumption and unsmiling smiles - tends to overemphasise buoyancy and cheerfulness, Muharram helps us admit that reality is, for the most part, about grief and loss. The good life is one not immune to sadness but one in which suffering contributes to our development and self-actualisation. Indeed this view of melancholy is perhaps universal; in the Greeko-Roman philosophy the term pneuma, constitutes the human soul. Ancient Greek doctors viewed sadness as corresponding to the soul, according to their humeral system the humeral body and soul were controlled by four fluids, known as humours, and their balance directly influenced a person’s health and temperament; Melaincholia comes from the word Melina Kole - black bile, the humour believed to cause the mood to be.

The melancholy in Muharram then is not only a wise accommodation with griefs, large and small, of existence, but, is a criminally misused and an underused concept; it doesn’t mean grim and miserable, it means grasping without rage the fact that the world is full of folly and greed, that its rare to find inner peace, that it is hard to live comfortably with those we live, that its very unusual to have a career that’s both financially rewarding and morally uplifting; that many decent people have a very hard time. Every human by connecting ‘brute facts’ such as loss, suffering, pain with wisdom.

Often sadness simply makes a lot of sense. But as Albert Camus says in his Notebooks we must “Find meaning. Distinguish melancholy from sadness.” Melancholy is not pessimism either. Pessimism is a sign of decay and optimism the sign of superficiality. The Greeks believed “tragic optimism” to be the at the core of those who seek intensity and extent of experience, even at the cost of woe, and are delighted to find that strife is the law of life. In fact, the birth of drama and tragedy itself is proof of the Greek understanding of, and, intimacy with melancholy. The melancholy in Muharram then seems to awaken us from our somnambulism, to want us to knows how tragic life can be. And to learn to greet the sadness with stoicism, courage and quiet strength. The contemplation that Muharram seems to offer then becomes an achievement.

We learn too late about stuff; you’ve wasted years, everyone has. You can only avoid regret by either switching off your imagination, or, by collectively and voluntarily engaging with melancholy. The wisdom of the melancholy attitude, as opposed to the bitter, raging, angry one, lies in the understanding that the sorrow isn’t about you, that you have not been singled out, that your suffering belongs to humanity in general; a commitment to face difficulties without rage or violence. To take that fully to heart is to become more compassionate and less vengeful. The melancholy facts shouldn’t make us desperate rather more forgiving, kinder, and better able to focus on what really matters while there is still time.

And while we are on the subject of old time, here is the bard, in sonnet 64, melancholically:

When I have seen by Time’s fell hand defac’d

When sometime lofty towers I see

When I have seen the hungry ocean gain

Advantage on the kingdom of the shore,

And the firm soil win of the wat’ry main,

Increasing store with loss, and loss

When I have seen such interchange of state,

Or state itself confounded to decay;

That Time will come and take my love away.

This thought is as a death, which

But weep to have that which it fears to lose.