Gender, Islam And the Clerics in Pakistan: Tariq Jameel Provoked Debate on The Objectification of Women

The recent viral video of a sermon on the concept of Hoor (Houri) and statement correlating the Covid-19 pandemic with “women’s immodesty” in a live telethon address by the famous Pakistani preacher and Islamic scholar Tariq Jameel has generated an interesting debate and backlash on the sexualization and objectification of women’s bodies in Islam as it is practiced in Pakistan. 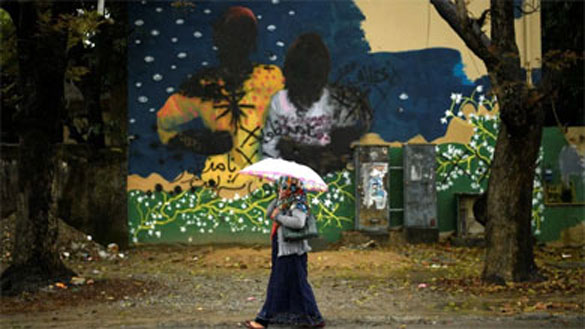 A woman walks past a mural in Islamabad depicting women whose faces and hands were blackened by Muslim extremists. Photo: AFP / Aamir Qureshi

It is not an easy topic to argue about, as interpretations of Islam’s teachings on gender and sex are based on a variety of discourses. The ground-breaking work of Laila Ahmed, Lila Abu-Lughod and Saba Mahmood in this field is very important. However, there are numerous other discourses on the subject.

In the explicit religious discourses or theory the two sexes are seen as complementary. Men are the sole breadwinners and are strong, and in return women should be obedient and serve their husbands. Before marriage, they should keep their virginity intact and after marriage their loyalty, chastity and complete devotion to their husbands for social and economic security.

In the orthodox discourse, women are the weaker sex, and can be easily overpowered by men, so they need protection from men’s desires. Women’s desires are not considered as intense as those of men, therefore they cannot resist men.

Moreover, men’s sexual gratification is possible only in the legal framework of marriage, and not in zina, or illicit sexual intercourse.

Islam has defined a set of parameters and conjugal duties for women. It is mandatory for women to provide sex and reproduce and raise young. Women cannot refuse and must perform these duties to prevent their husbands from pursuing illicit sexual intercourse, immoral activities and marrying a second wife.

It must be noted that women’s powerlessness can be inverted if they manage to seduce men other than their lawful husbands. That is why orthodox scholars acknowledge the danger of the female power of seduction and urge men to avoid emotional attachments toward women.

Consequently, the implicit religious discourses or theory recognizes the disruptive potential of women that they can create fitna, or chaos due to sexual disorder in society.

Both men and women have active sexual natures and the sexual needs of females must be satisfied. According to the 11th-century Persian philosopher Al-Ghazali, the virtue of woman is the man’s duty; he has to gratify her sexual needs in order to save her virtue.

Therefore, Laila Ahmed argues, in her work tracing the varieties of discourses in the history of Middle Eastern Arabic women, that in the Abbasid era, the term “woman” became synonymous to sexual slave, sexual object or commodity.

It is due to that fact that Islamic scholarship and Muslim scholars of that time such as Al-Ghazali defined women as sexual beings, which has had a great impact on Islamic law and its possible formulations even today.

In brief, women are viewed as sexual beings, so whatever women do, they are mainly seen as tantalizing and enticing bodies. Unlike men’s bodies, a woman’s body has only one sexual dimension, whereas men’s bodies contain social, political and economic dimensions, and in the presence of female also a sexual dimension.

Entertainment is a sensitive field for women to work in because of the central importance given to their bodies, and in strict religious terms female singing is haram (prohibited). In addition, dancing is considered a bodily expression and a sexual activity, even if she is fully covered.

In conclusion, the sexual moving of bodies is considered shameful for women and almost identical to prostitution. Decent women hide their shame, whereas a man who dances, moves and shakes his body is not regarded as shameful in orthodox discourses.

Original Headline: Gender, Islam and the clerics in Pakistan