Sauntering Through the Sahara (Part One)

The bus chugged down the clogged thoroughfare and over the bridge across the Nile. A dozen barges and a few luxury cruise liners hugged the shores of the river. Passing through the decaying suburbs of Cairo, an hour later we were speeding through pure, uninhabited desert—the Sahara. 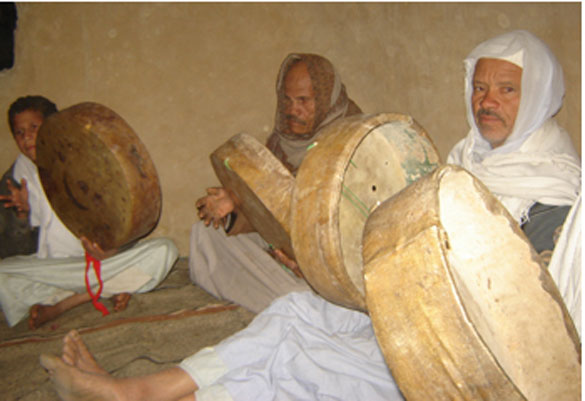 I’d always fantasized traversing the Sahara, the world’s largest desert, atop a camel and in the company of hardy Bedouins, moving from one oasis to another by day and camping under the vast empty skies at night. That was not exactly how I was doing it, though, comfortably ensconced in an air-conditioned bus—certainly not quite the camel caravan that I had long dreamt of travelling with. Sipping bottled mineral water (manufactured by an American multinational corporation) handed out by a gruff conductor was not quite the same, I had to admit to myself, as slaking one’s thirst at holes in the sand in remote Saharan oases. But, that said, I really couldn’t complain. The bus was comfortable, and I was indeed deep in the Sahara now!

For four long hours we raced along the smooth highway, the countryside empty and austere. But the desert was not without its haunting beauty. Far from being monotonous, it seemed to change as we moved ahead. At first, it was pebbly, interspersed with giant black rock formations that stretched far till the distant horizon. Then, it transmogrified into low-lying flat-topped hillocks, stratified in several layers in a rich profusion of hues—rusty brown, pale green, mustardy yellow and peachy pink. Then, further along rose giant breast-shaped dunes of pure sand, patterned with wave-like ripples. Not a tree or even a bald patch of grass, however, was to be seen.

At noon, the bus pulled into Bahariya, one of the few oases that lie scattered across the vast Egyptian Sahara. I had originally planned to get off here, but as the bus drew into the settlement I quickly changed my mind. It was certainly not the remote, changeless Bedouin outpost in the middle of nowhere that I had imagined it would be. Heaps of garbage accumulated in towering pyramids on either side of the sand-strewn road. Long-haired Western tourists sat under rainbow-coloured striped umbrellas planted in the shade of ramshackle motor repair shops. Run-down lodges, quaintly named ‘Cowboy Inn’, ‘Bedouin Delight’, ‘Ali Baba’s Home’ and suchlike, and ‘supermarkets’ that called themselves ‘The City Store’ and ‘Madonna Palace’, peeped out from behind the crowns of rows of date palms. Men in jeans and tea-shirts zipped about on motorbikes and pick-up trucks, sending up whirls of dust. Satellite television dishes sprouted like algae on the roofs of squat adobe houses. An army of rough-looking touts invaded the bus and almost dragged me out, insisting, ‘We give you genuine Bedouin holiday, desert safari and camel-ride’. Their rude hectoring, which I had by now got inured to after three weeks in Egypt, only made me adamant in my resolve to flee Bahariya as soon as I could. Mass tourism and economic ‘development’ had completely transformed the Sahara, and, at least in this stretch of the desert life was a far cry from the idyllic pastoral simplicity that I had supposed it would be. 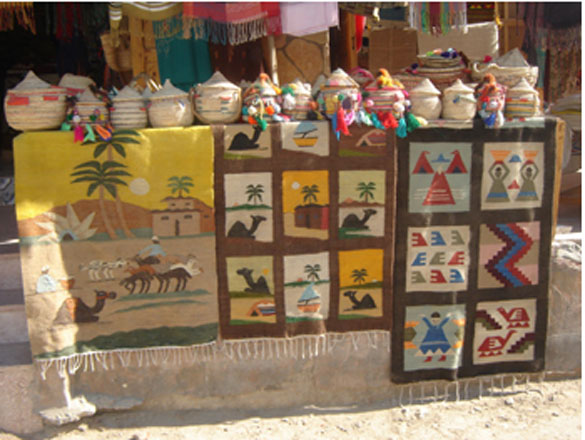 Luckily, the bus I was seated in was heading to the farthest oasis in the western Egyptian Sahara—to Dakhla, a journey of another eight hours, and I slipped back inside. The countryside that opened up after we sped out of the lush palm groves of Bahariya was stark and austere. In a while, we entered the White Desert, a vast empty plain that runs for over a hundred kilometers, dotted by eerie chalky white rock formations sculpted into various twisted forms by howling winds over the centuries. Not a speck of cloud littered the sky, so far into the Sahara were we, where not a drop of rain has probably fallen for centuries. A lone black camel-hair tent was planted at the entrance of a yawning cave, outside which a donkey and a pair of scraggly goats played, and a pack of camels sauntered about. I saw no Bedouins leading camel caravans, as I had expected I would—most of the camels that once abounded in the desert, the man sitting next to me said, had been eaten up years ago, for the nomads had almost all been settled and had replaced their dromedaries for Japanese-made pick-up trucks. The only other indication of human presence that I spied on that vast stretch till Bahariya were a couple of ugly communications towers and boards, painted in electric green, announcing the names of God, taken from the Quran, that were stuck on poles and planted in the sand by the roadside.

Two hours later, the desert was suddenly interrupted with a burst of parrot-green buck-wheat fields, and rows upon rows of stunted olive trees, fringed with date palms drooping under the weight of their ripening fruit. Clear water gurgled in neatly-set channels, irrigating dense mango and banana plantations, over whose low-lying mud walls crept strawberry-hued bougainvilleas in full bloom.  Cows munched in lush, almost Alpine-like, pastures that were fenced in by slender eucalyptus trees. This was the modestly-sized oasis of Farfara, where we halted for a while for tea. As in Bahariya, Farfara seemed to have been over-run by hordes of camera-clicking foreign tourists, enticed by touts promising them what they called ‘the genuine Saharan experience’. Like Bahariya, it boasted all the trappings of ‘modernity’: satellite televisions, gaily-painted brick houses, shops overflowing with factory-made goods, and even street lights and a couple of carefully-manicured public lawns, complete with see-saws and swings in bright pastel shades. There were no nomads dressed in swirling robes that I had imagined I would see in hordes, and it was only in shops that catered to foreign tourists that one could find ‘traditional’ Bedouin turbans and gowns, which the locals seem to have long since abandoned.

Trundling ahead, the bus swam through a vast sea of sand. The sun, now a gigantic orange ball, slid rapidly towards the horizon, setting it aflame. An army of giant storks flew across the empty sky, which was now stained with stripes of brilliant pink, and blushes of red and yellow. Long after darkness had fallen, when the sky was littered with a million blinking stars, just as I had dreamt it would, we finally arrived at Dakhla. I lumbered off the bus and checked into the nearest lodge.

A swank, modern town was what I found I had arrived in when I went about next morning. The roads that criss-crossed the towns were wide, straight and smooth, and traffic lights stood at the intersections. Large bungalows, nudging shoulders with modern schools, hospitals and swank hotels that advertised what they boasted of as ‘traditional Bedouin hospitality’, opened out into leafy parks. Cafes did brisk business even at this early hour. Men sat glued to giant television sets cheering a winning football team, while puffing away at giant nargilehs, the Egyptian counterpart of the Indian hukkah. A train of brightly festooned cars zoomed down the road, packed with revelers celebrating a marriage party. The men and women who sat inside and atop the cars whistled, clapped and cheered noisily to thumping music.

I trudged up a knoll to the Qala, the fort inside which the denizens of Dakhla lived till just a few decades ago before the new, ‘modern’ town came up. Labyrinthine lanes wound their way up to the summit, criss-crossed with shaded passageways lined with mud houses, now all in a state of woeful ruin. Only a few of these were still inhabited, presumably by families that could not afford to shift to the ‘modern’ town below. The tough walk to the crest of the fort was well worth the effort, for the panoramic view that it afforded: Of an enormous stone ridge, below which nestled hundreds of homes huddled, and on the other three sides a vast sandy ocean, whose enormous untouched dunes stretched for unknown hundreds of miles, to the Sudan in the east, and to Mali, Libya and Chad in the south and west—pure, virgin, uninhabited Sahara.

I spent a couple of blissful, uncluttered days in Dakhla, practising my very basic Arabic at roadside cafes, and hiking to nearby settlements strewn across the oasis. On my last day, I travelled to Al-Qasr, an hour’s ride by bus at the very end of the oasis. The scenery was stunning, with brilliant green fields and verdant orchards growing out of rich, grape-red soil, contrasting with the bare stone ridges in the distance, beyond which the Sahara rolled on endlessly. As in Dakhla, the only ‘traditional’ buildings I saw along the way were impressive and expensive newly-built hotels that catered almost exclusively to foreign tourists and made to look ‘authentically Bedouin’ with tribal rugs, tassels and pom-poms decorating their lavish entrances.

The abandoned ruins of Al-Qasr’s famed ‘Islamic City’, as it is called, or Al-Qirriya al-Qasr ad-Islami, were visible from a distance. Mud structures crowded at the base of a hillock, silhouetted against the stark blue sky. The warren of some two hundred structures that make up the settlement was remarkably well-preserved, consisting of numerous dwellings (some of them four-storied), the residence of the chieftain of the town, two mosques, public halls, factories for pressing oil, and barns for storing dates and olives, all carved out of soft mud, with palm trunks bound together for roofing.  Shaded corridors wound their way through the maze of buildings, keeping out the harsh desert sun and the sand. The doors of the houses were crafted from shanks of palm-wood, and decorated with wooden lintels bearing delicate Quranic calligraphy and, in some cases, Pharaonic hieroglyphics.

Now, of course, no one lives inside the castle, which stands as mute testimony to a way of life that lasted for centuries until the Sahara was opened up to ‘development’. For a handsome fee, Al-Qasr’s museum provides some pale glimpses of a centuries’-old mode of existence that has now almost completely vanished. The Sahara, at least in this remote western corner of Egypt, has finally been tamed and ‘civilised’. Hardly any nomadic Bedouins, whom I had dreamt of traversing the treacherous desert with, remain. An entire way of life built on a symbiotic relationship between the desert and its denizens has been totally and irrevocably transformed. The oases of the Egyptian Sahara have become the new outposts of ‘modernity’.

It was somewhat of a let-down; I had to admit—coming all this way, deep into the world’s largest desert, only to see city-life in miniature.  But was it at all fair to expect the Bedouins to remain what I had hoped they would be for my own gratification—exotic objects, frozen in time forever, untouched by the sweeping winds of change? That, of course, is a question that bedevils all ‘traditional’ cultures and those who want to preserve them as they are, or as they imagine they should be.

And with such thoughts bouncing about in my mind, I packed by bags and headed up further into the Sahara, travelling to the oasis of Siwa, near the Libyan border.

A regular columnist for NewAgeIslam.com, Yoginder Sikand works with the Centre for the Study of Social Exclusion at the National Law School, Bangalore.