Last week during the hearing on Punjab’s dissolution of local bodies, Justice Qazi Faez Isa made a number of damning observations on the conduct of not just the Government of Punjab but also the conduct of the Federal Government vis a vis freedom of the press. He said in clear language that media in Pakistan is not free. To back this up he asked the media persons to raise their hands if they think media free in Pakistan. No hands went up. When he asked them to raise their hands if they think media is not free, all hands went up. It was a very embarrassing moment for the Federal Government, which for the last two and a half years has held no punches to ensure that the media is made compliant to their whims and sensitivities. Without a free media there can be democracy. Justice Qazi made another astute observation: While a person is free to dislike some provisions of the Constitution by right, the constitutional framework and method is supreme. It is this part – the right to dislike some provisions- that was the most important part of His Lordship’s observations.

There is much that one dislikes about the present Constitution i.e. its discrimination against Non-Muslims and its theocratic undertones. Still this is the Constitution we have and we must work within its framework to deliver a democratic society.

Extreme right wing only sees those clauses that benefit them but forget that the Constitution provides fundamental rights of freedom of speech and religion. The same Constitution also provides for minorities the right to freely profess, practise and propagate their faith while being allowed to freely develop their culture. However consider for example the case of Ahmadis. Declared Non-Muslim by this Constitution in 1974 (a provision they dislike as is their right), since 1984 they are not allowed to free profess, practise and propagate their faith or develop their culture freely. In fact they are routinely imprisoned for their faith or even reading the Holy Quran. As if that was not enough they are not allowed to even publish their own books for their own consumption. This is championed as a constitutionally sanctioned discrimination when the Fundamental Rights, both Article 19 and Article 20, say otherwise. These Fundamental Rights are immutable and cannot be made subject to Ahmadis agreeing to their classification as Non-Muslim. Constitution declares them Non-Muslim for the purposes of law and constitution but it does not make it obligatory on them to consider themselves Non-Muslim.

Pakistan had embarked on the Islamic Republic project in 1956. The makers of the first constitution were mindful of the fact that the very nature of the Islamic Republic will come to be contested between the modernists and the orthodoxy. The framers of 1956 Constitution were not outright secularists – though it would have been better if they were- because if they had been they would not have wanted an Islamic Republic. Therefore they ensured that other than the office of the president, there were no bars against any community. The office of the Prime Minister was open to every community and more importantly the Republic had no state religion.

The 1956 Constitution had no religious oaths and unfettered fundamental rights of freedom of speech and religion. By and large the Constitution of 1962 – which unlike the 1956 Constitution was not framed by a Constituent Assembly and was presidential in nature- followed the tradition of keeping religion and state had somewhat a distance. Indeed initially the 1962 Constitution had named the country Republic of Pakistan, something, which was changed back to the Islamic Republic by first amendment. 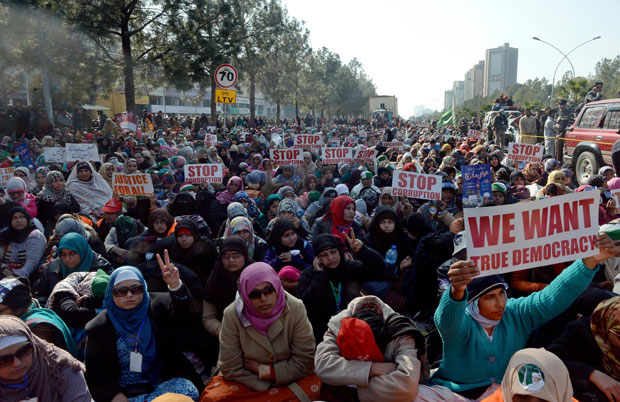 All of this changed in 1973. Zulfiqar Ali Bhutto was a towering political figure but he was driven by this mad notion that the constitution must be made by the consensus of all sections including the religious right. He had come to power defeating the parties of the right and the main opposition to him the NAP was also secular. What drove him to seek the consensus of the religious right is one of life’s great mysteries as are his actions in 1974 because he was no bigot- indeed far from it. These are questions only Bhutto could have answered but providence did not give him the opportunity to right the wrongs.1973 could have been Pakistan’s moment but it was blown and is now a cautionary tale.

1973 Constitution was further mangled by General Zia’s bigoted dictatorship and now enables the kind of ruthless denial of fundamental rights that we see. Consider for example the judgment by Islamabad High Court in the now famous Allah Wassaya Case, PLD 2019 Page 62, authored by the now disgraced “Justice” Shaukat Aziz Siddiqi. It builds on Zaheeruddin v State, 1993 SCMR 1718, which had upheld the persecution of Ahmadis as being constitutional. The Allah Wasaya Case went further.

First it repeated the propaganda against Ahmadis declaring them enemies of the state. The thrust of it was that no Ahmadi should hold an office in the state. Clearly the disgraced judge either had no idea or deliberately chose to overlook the fact that the reason Pakistan today has UNSC Resolutions on Kashmir was the good work of an Ahmadi. Zafrullah Khan, appointed Foreign Minister by none other than Quaid-e-Azam Mahomed Ali Jinnah himself, had gotten the resolutions we wave in India’s face. The last official action by the Quaid-e-Azam was to give Zafrullah Khan the plenipotentiary powers on the Kashmir issue. The disgraced Judge also forgot to mention that an Ahmadi General who was on the verge of taking all of Kashmir before he was replaced by Yahya Khan in 1965 who went ahead and blew that great opportunity. It was an Ahmadi Mirza Muzaffar Ahmad as the Federal Finance Secretary who got the Tarbela and Mangla Dams made. Earlier he was instrumental in getting the Indus Basin Treaty being signed which protected Pakistan’s rights as the lower riparian state.

It was an Ahmadi, Dr Abdus Salam, who founded SUPARCO (and sent a satellite into space long before most countries in Asia) and then led the famous Multan Conference where the idea of Pakistan’s nuclear bomb was born. My guess is that the now disgraced judge Shaukat Aziz Siddiqi is too ignorant to know these facts or too much of bigot to appreciate the salience of these contributions.

The judgment did not stop here. “Justice” Siddiqi also ordered that Ahmadis should be stopped from calling themselves Ahmadis and also forced to add “Qadiani” “Mirzai” or “Ghulam-e-Mirza” to their name. The ignorant disgraced judge thus wanted to replicate the Nazi model in Pakistan. Thankfully his big mouth got him into trouble soon enough and Pakistan was rid of General Zia junior before he could become the Chief Justice of Islamabad High Court. One wishes that Pakistan had more of Justice QaziIsas and fewer Justice Siddiqis.

Original Headline:  A short history of religious bigotry in our Islamic Republic