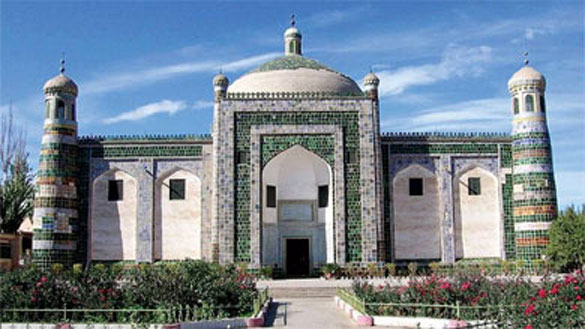 A mosque in Kashgar, Xinjiang, China

I have often been told that Islam arrived in the lands that are now Bangladesh in the 13th century, under the protection of Turkic invaders, who were, most probably, seeking refuge from the Mongol hordes who were sweeping across Asia at the time.

This is, clearly, to deny these lands their true place in the history of Islam.

Not only is there evidence, from at least a thousand years before the lifetime of the Prophet, of trade from these lands with Europe and Africa, and certainly with Arabia, from long before the Common Era, but the history of Islam in Central and East Asia gives a fair indication that Islam spread, even during the Prophet’s lifetime.

Amongst the most interesting pieces of tangible “evidence” for the spread, even during the Prophet’s lifetime, are mosques in Kerala, and the famous Huaisheng Mosque in Guangzhou, China.

The denizens of Kerala tell of Arab traders of the time constructing the mosque; well, there is a great deal of compelling evidence that, in fact, Kerala was, at best, a trading centre itself, but, above all, was a stopping place on the voyages to the region’s main centre of trade in the Ganges Delta.

Guangzhou, previously known as Canton, stands on the famous Pearl River, with origins in Yunnan Province of China.

Since I commenced my researches into the Silk Road that runs through Bangladesh, I have often wondered why, if water is widely acknowledged as the highway of the ancient world, early traders would have willingly taken to their feet to traverse the hazards of the northern foothills of the Himalayas, along and dangerous route by all accounts, when they could travel by water to north Assam.

From north Assam, the route across northwest Myanmar would take them, a comparatively short trek, to Yunnan, and the waters of Pearl river.

It is claimed that the founder of the Huaisheng Mosque, said to be the Prophet’s maternal uncle, Sa’d ibn Ali Waqqas, a merchant, himself travelled through the lands of Bangladesh to reach China.

Such evidence confirms what we already knew, from the shrine in Chittagong, dedicated to the Persian Sufi, Bayazid Bostami, that Islam certainly arrived in these lands earlier than commonly accepted tradition maintains.

Born early in the ninth century, it remains debatable whether Bostami ever actually left his homeland, and the shrine represents a memorial built by his adherents. Nevertheless, it is certainly three centuries earlier than the 13th century of conventional wisdom, that there would appear to have been sufficient of an Islamic community in Chittagong to construct such a shrine.

In fact, of course, logic defies the conventional wisdom. It is, clearly, very unlikely that early converts to Islam were not amongst the Arab traders who, we now know, were doing business in, and almost certainly through, the Ganges Delta from, in all likelihood, at latest the middle of the last Millennium BCE.

Since, living as they do so close to death, in their travels, merchants throughout the world have often been early and devout adherents, to religious causes, and it seems absurd to suggest that early converts to Islam were not amongst those traders.

By that definition, we may assume that Islam arrived, almost certainly, in the lands that are now Bangladesh, in the early to mid-seventh century.

Certainly, the Chinese development of early Islam suggests that, like Buddhism, nearly a thousand years earlier, Islam spread into Central Asia along what is now widely accepted as, perhaps the first, Silk Road that ran through Bangladesh.

It also seems reasonable to suppose that this trading centre may have accounted for the spread beyond, into South East Asia.

That the religion was not established in the lands of the Delta itself for another six or seven hundred years seems improbable. The question I have asked, many times, therefore becomes, where is the evidence for such an establishment?

If, and it may still be a rather big if, mosques were founded, both en route to the Delta, at Kerala, and at the ultimate destination on the east coast of China, why was none founded at the crossroads of such trade, where, presumably, subject to the vagaries of the monsoons, merchants were left idle for weeks and months?

The question I have asked before in Bangladesh is, “Where are the mosques.”

The, now somewhat infamous, and much disputed, “Lost Mosque” near Lalmonirhat has been dismissed as being too early in the accepted history of Islam. Increasingly, my response would be, that it is, perhaps, rather late, its dating tablet, in Tajhat Museum in Rangpur, suggesting Hijri 69, would give us a foundation date of 691, about 50 years after the death of the Prophet.

Whilst it is the dating tablet that suggests its period, it is more the circumstances of its finding, in close proximity to a fine, early period Mughal Mosque, and the bricks and style of construction that persuade me of its origin. I doubt, in view of its proximity to the Mughal masterpiece, a suggestion that the ruin is, in fact, 17th century.

Its location, too, is interesting. Close to the junction of Brahmaputra and Teesta rivers, both widely acknowledged as ancient river trading routes, it also lies close to the location of the sixth century, Buddhist city of Bhitagarh, described as a flourishing trading centre in itself.

There remain, however, real mysteries that surround the identification of the lands of Bangladesh as both an early centre of Islam, and a base from which this great religion reached places north and east from the Delta, along ancient, well established, routes of trade.

The first of those mysteries is why a secular, though Muslim dominated nation like Bangladesh should be in so much denial about its own, rich history. Especially, denial about 600 years of Islam.

It may be understandable, though reprehensible, to deny its extraordinary history as a major foundation of both Hindu and Buddhist faith groups, and, possibly, Jain as well. After all, as the Prophet, himself, is reported to have instructed his adherents, “Go in quest of knowledge, even unto China. Seek ye knowledge, from the cradle to the grave.”

Clearly, this was not advice to seek only Islamic knowledge, but rather, an instruction for education. The reference to China, however, may be regarded as significant; at the very least, it may make it easier to accept his maternal uncle’s foundation of the Guangzhou Mosque.

As great a mystery may well be the absence of any early mosques, other than the possible at Lalmonirhat.

We have every reason to believe that, until the Sunga Dynasty, religious, or communal, warfare was unknown in these lands. And we have no reason to suppose that rulers, even of the Sunga dynasty, were in the business of threatening their own sources of wealth ... trade. And, certainly, there is plenty of evidence that much of the religious heritage survived changes in the religion of rulers and overlords.

A far more likely explanation for the absence of mosques may well be that their remains lie beneath the great alluvial flood plains of the country.

The evidence seems conclusive that the lands that are now Bangladesh was once a great thoroughfare of philosophies, as much as of cargoes. Whether Islam flourished before the ninth century, has yet to be established, but certainly seems probable. Yet another aspect of the incredibly rich, but much neglected, heritage of these extraordinary lands.