Even as India is scrambling to start the coronavirus vaccination drive, Muslims have raised concern over the use of pork products – forbidden in Islam – in the vaccine.

However, three firms – Pfizer, AstraZeneca and Moderna – have rejected the allegations of using pork gelatine, but in vain. The issue has triggered an intense debate among the ulema, prompting some to write to the World Health Organization (WHO) and seek details of the contents of the drug. 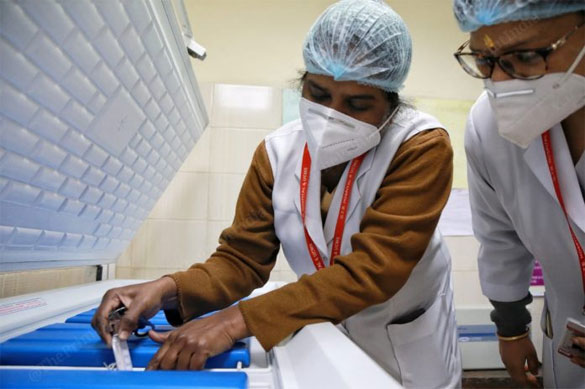 In India, which has the second-largest Muslim population, the concern can have a significant impact because of its potential to disrupt the vaccination drive, although the Narendra Modi government has maintained that it would not be mandatory. Vaccine advocates swiftly responded to the concern of the hesitant groups, prompting several Muslim bodies to clarify Islam’s stand on the controversial issue. The concerns must be quickly addressed in the interest of public health and the community’s willing participation.

Islamic scholars are divided on the issue with the majority of them citing verses from the Quran to advocate for the vaccine. However, the controversy came to light after the respected Muslim religious body, the Raza Academy, along with some other organisations, reportedly issued a fatwa against its use. The fatwa was sufficient fodder for Islamophobic Indians, who jumped in joy and started Islam/Muslim bashing.

The television studios were gleamingly adorned with misconstrued mullahs and anchors cunningly putting Islam in the dock. But, thankfully, the biggest Islamic seminaries came in quick succession to denounce the fatwa and the hesitancy against the vaccine. The prominent organisations and individuals include the Jamiat Ulema-i-Hind, Jamaat-e-Islami Hind, Darul Uloom Deoband, Dargah-e-Ala Hazrat, and prominent scholars like Maulana Kalbe Jawad and Maulana Khalid Rasheed Firangi Mahali. Above all, the Gulf countries, mainly Saudi Arabia and the United Arab Emirates, have started the vaccination drive and even announced that a vaccine with pork product is permissible. Perhaps, these views took away the TV anchors’ smiles.

Further, noted scientist and Islamic scholar M.G.H. Zaidi, who teaches in G.B. Pant University of Agriculture & Technology, has made it clear, according to a report in Amar Ujala, that pork-derived gelatine is used in the drug as a stabiliser and asked everyone, including Muslims, to take it.

It is not only the Muslims who are hesitant about the vaccine, Jews too remain in doubt about the drugs allegedly made from forbidden food. Since the Abrahamic faiths have a set of dietary guidelines, Muslims and Jews often raise questions on such issues. (St Paul, the most revered man who is viewed as the founder of Christianity, had separated Christianity from Judaism, arguing that Moses’ Commandments are not applicable for Christians).

Islam has a set of codified guidelines for all aspects of life. The main focus of Islam is purification of the soul, for which it prescribes certain ritual practices. Besides insisting on purification of the inner self, Islam also asks its believers to exercise restraints in the intake of food and drinks. However, the Quran allows even the use of forbidden items to save a person’s life. But, there are differences in jurisprudence over the interpretation of the Quran’s verses.

Some clarify that even a ‘haram’ item can be considered ‘halal’ and fit for consumption or use if its original form transforms radically. However, Imam Sha’afi, one of the four jurisprudence that the majority of Sunni Muslims follow, does not consider it valid if the transformation is through man’s intervention.

“According to the Jewish law, the prohibition on eating pork or using pork is only forbidden when it’s a natural way of eating it,” said Rabbi David Stav, chairman of Tzohar, an Israeli rabbinical organisation. The Jewish religious scholars clarify that if the item is injected into the body, not (eaten) through the mouth, then it is permissible.

The Muslim world is often seen as the epicentre of vaccine hesitancy. But it is factually incorrect.

A London School of Hygiene & Tropical Medicine survey of 67 countries, published in 2016, showed that the European region had one of the lowest confidence levels in vaccination safety.

And, so far as hostility towards the polio campaign in north-west Pakistan is concerned, the border conflict played a major factor. Further, the long-cherished perception that the Christianised West was ever-ready to usurp Muslims strengthened in the post-9/11 world.  Didn’t the Central Intelligence Agency (CIA) try to use a fake vaccination campaign to acquire DNA from Osama bin Laden’s relatives in Abbottabad?

Referring to a study, Al Jazeera writes, “Polio prevalence in Pakistan is correlated with the frequency of US drone attacks between 2004 and 2011. Militants suspected that polio vaccination campaigns were a smokescreen for intelligence-gathering operations, and were therefore reluctant to grant them access to areas under their control.”

Many groups and ulema are casting aspersions on the nexus between vaccine firms and certain governments. Fake claims of infertility resulting from the coronavirus vaccine are also adding to public fear. Even though it has been fact-checked multiple times.

These suspicions, no matter how small, should be addressed. It is the responsibility of both corporations/scientific community and Muslim leaders to dispel fears. If these questions are not addressed, it will be naïve to expect that people, especially Muslims, will come forward for vaccination.

Syed Zubair Ahmad is founder-editor of MuslimMirror.com. Views are personal.