Here are two versions of the same sequence of events.

One: In 1947, when Hari Singh, the ruler of Kashmir, opted to stay independent, Pakistani armed intruders from Pakistan attacked Kashmir. Hari Singh then signed an agreement to join India, and the Indian army was sent in to defend Kashmir. 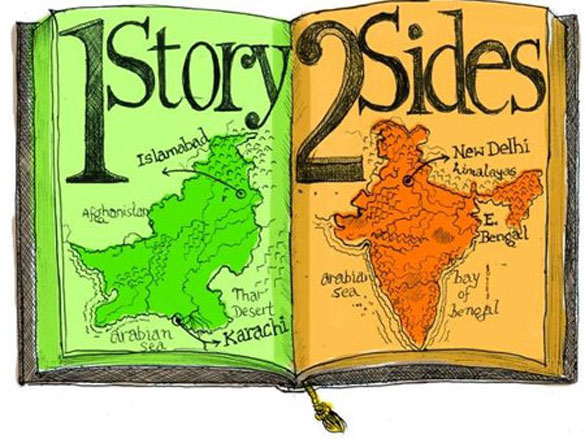 Two: Hari Singh started a brutal campaign to drive out Muslims from Kashmir. Over 200,000 people in the princely State, supported by the tribesmen of the Northwest Frontier Province, were successful in liberating a large area of Kashmir from the Maharaja’s control. So Hari Singh was forced to turn to India for help and in return acceded to India.

In school, we learn that History isn’t like Maths. It isn’t a ‘scoring subject’. A two plus two will yield the same result all over the world, but history is subjective. It’s written by people, after all. People are subjective too; people find it difficult to not pick sides, a fact borne out by those history textbooks of India and Pakistan.

In a way, this conflict led to a book that illuminates the biases and subjectivity inherent in history. The History Project — launched on April 30 — was born at the Seeds of Peace, an annual camp for teenagers from countries in conflict, held at Maine, in the U.S. Feruzan Mehta, then director of Seeds of Peace-India, came up with the idea in 2005. Six years later, The History Project was founded by three young Pakistanis: Qasim Aslam, Ayyaz Ahmad and Zoya Siddiqui. They brought together a team of editors and volunteers from both countries to produce the Project’s first history textbook.

The key to the project was the recurring arguments over history during the camps. “A Pakistani kid and an Indian kid would argue about the same event,” says Ahmad, “without realising that they had been taught different versions. So, we decided to put both sides together in one volume. The idea was dormant for a few years, until we decided to take it up again in 2011.”

The target audience was 12-14 year olds and, to make it appealing to them, Zoya Siddiqui was brought on board to add a bit of colour to the text. Today, the final product takes the form of a book that puts “these different (often opposite) historical narratives side by side and augments them through illustrations (that have their own concept narrative flowing through them).” For example, the Indian and Pakistani textbooks are divided on the issue of Bengal’s partition in 1905. While Indian textbooks claim that the real reason for the division was to curb the rising tide of Indian nationalism, their Pakistani counterparts accept the administrative explanations cited by the British. Indian textbooks go on to describe the anti-Partition movement as one in which both Hindus and Muslims marched side by side, while Pakistani textbooks say that only Hindus participated in the movement.

The History Project was compiled using nine Pakistani and three Indian history textbooks that are part of the high school curriculum in both countries. It encompasses 16 salient events beginning with the1857 War (when the divide between Hindus and Muslims first became prominent) and ending with the Partition in 1947. This is not a forced merging of texts; neither are the narratives undermined in any way. What it does is simply to put the accounts from Indian and Pakistani history books side by side, and let the reader spot the difference. The very act of juxtaposing divergent narratives of one event highlights the disparities and immediately suggests that there might be an alternative perspective. This opens up the possibility of dialogue that can both question and critique the existing narrative, so far regarded by both sides as the unquestionable and final truth.

The natural question on this side of the border is: Why only three Indian textbooks? Doesn't that limit the perspective or narrow it down? Noorzadeh Raza, one of the editors, says that while they wanted to give both narratives equal importance, one of the major challenges the team faced was the difficulty in accessing Indian history textbooks. “Another was the fact that some events are present in textbooks on one side of the border but have been excluded in the other. The Civil Disobedience Movement of 1930, for example, is not mentioned in most Pakistani textbooks.”

It’s been a while since the book’s launch in April. In the last few months, the History Project has been presented to school students and teachers on both sides of the border. While the editorial team admits that it’s still hard to say how it’s doing as a history book or a reference text, they feel that the response in both countries has been phenomenal. “Only after people have read the book and absorbed some of the ideas in it will we be able to understand how it’s doing as a historical text,” says Ahmad. “The fact something of this sort even happened was a big surprise for most people. Certainly, the idea had been there for quite some time and I believe that people realised that there were discrepancies on both sides. Yet for someone to go ahead and actually put the two side by side didn’t seem likely.”

In April, Ahmad, Aslam and Siddiqui officially launched the book by presenting it at four schools in Mumbai. They worked with kids from Std. VIII-X. Ahmad says that while some students had not studied Indo-Pak history, they easily grasped the fundamental concept of another side to the story. In the following month, the book was introduced in schools in Lahore. “There, I believe we were at a slight disadvantage, as our Indian peers were not with us for the presentations due to visa issues. This, of course, took some oomph out of the presentations but the kids we worked with were extremely enthusiastic,” Ahmad continues. “The best thing about working with kids on both sides was that, they weren’t politically correct at all. So if they felt a certain way about an issue, we got to hear that. For some people, this can be a bit difficult to digest, but it’s important to realise that if 12-14-year-olds already have such strong feelings about historical issues (often without having studied them at all), then there’s something more fundamental at play here, which needs to be highlighted.”

What Ahmad refers to here is how young students are easily influenced and often adopt ideas and beliefs without questioning them. This led the team to examine the way history and historical accounts affect the shaping of an entire generation.

Zoya Siddiqui, the illustrator, says that the book, surprisingly, hasn’t faced any resistance in either Indian or Pakistani schools. “We’ve seen shock, surprise, curiosity and even amusement, but not unwillingness to learn. In fact, it’s safe to say that we’ve achieved our goal in initiating a dialogue. There haven’t been any reactions. Rather, there have been ‘responses’, which is very positive.” Siddiqui’s illustrations, characterised by the repeated appearance of a faceless man, furthers the book’s message. “He is a visual depiction of that blurry edge that we, the team, are walking on. He is doing precisely what we are doing; adopting and illustrating both stances of history without propagating any answers. The ambiguity of the faceless man helps raise questions, which is our purpose.”

If the book has triggered a response in children, it has incited an even greater one in adults, both as appreciation and criticism. “We were aware that this would happen, simply because the school is one of the major agents of socialisation, where most ideas take shape. These ideas are carried on as adults later,” says Siddiqui. To the founders, helping children question and understand history seemed like “the right and relevant starting point”. The project is also being viewed as a step towards separating political and personal agendas from historical narratives; an opportunity, still in a nascent stage, to re-examine what we have always believed to be true.

Already having tackled a mammoth project, the team is contemplating and bouncing around a host of other ideas, ranging from a look at famous pre-Partition personalities to a post-Partition version of The History Project. As a first and crucial step towards accepting and integrating historical perspectives of two nations, The History Project has started causing ripples of change that the founders hope will soon turn to waves