Today is the holiest day in the Muslim calendar. It marks the "Festival of the Sacrifice", known as Eid al-Azha or Baqr Eid, celebrated at the end of Hajj.

Eid al-Azha has great spiritual significance. It is a celebration of Prophet Ibrahim’s total surrender to God’s will. When God asked him to sacrifice his son, Prophet Ibrahim, peace be upon him, went so far as to bring his beloved child to the metaphorical sacrificial block. However, Prophet Ibrahim’s son was replaced by a lamb which got sacrificed instead.  It was merely the intention of sacrifice that God required.

The significance of this is obvious. God is clearly telling Muslims that it is not the sacrifice which will please God, but their “devotion.” Unfortunately, it is this very dimension that is missing in today’s festivities. Sacrifice, in the manner God intended, would require sacrificing something dear to you. It should not merely be a ritual of buying goats and sheep and killing them in such large numbers that their meat can’t even be consumed, as happens every year in Saudi Arabia. 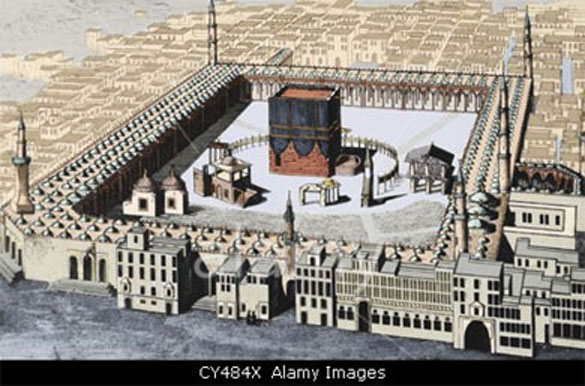 Today marks the "festival of the sacrifice", known as Eid al-Adha or Baqr Eid, celebrated at the end of Hajj.

Prophet Mohammad was very emphatic in his views on animal sacrifice: “if you MUST kill, kill without torture.” Unfortunately, this admonition is also ignored. The two million animals that were sacrificed in Saudi Arabia at the end of Hajj yesterday had been brought to the country in most horrible conditions, many of them dying en route.

I personally witnessed the torture animals go through when I was in Karachi on Baqr Eid, a few years ago. The whole city appeared to have turned into a slaughter house. One could hear the cries of goats and sheep for days before Eid, while they were still being traded in city squares and even in roundabouts on major arterial roads. The animals apparently knew what fate was awaiting them. It was the obscenity of the whole scene that I cannot forget. Baqr Eid, the holiest of days, had descended into an orgy of blood-letting, with the “devotion” that God requires completely missing.

The callousness we Muslims display towards animals would give the impression that the religion of Islam is indifferent to the fate of animals. In fact, Islam requires Muslims to protect, not just Human Rights, but Huqooq ul Ibaad or the rights of all creations of God.

Huqooq ul Ibaad is considered so important that it is given primacy even over Huqooq Allah or our duties towards God. While God may forgive us for our transgressions, given his Benevolent and Merciful nature, His creations will not even recognise us on the Day of Judgement. So we must fulfil our duties towards creations of God in this very world, since we cannot hope for forgiveness from them on the Day of Judgement.

Muslims should also remember the conduct of the Prophet in treating animals with kindness. On many occasions, during his journeys, he delayed prayers for the sake of first relieving the animals of their burden, and giving them food and water. He would refuse to lead prayers until animals were looked after first. He told several stories of people being forgiven all their sins for having shown consideration for a dog or a cat. According to Imam Abu Dawud, the Prophet forbade the hitting of animals on their faces and branding them. He also forbade sports based on animal fights.

Multiple instances of this concern for animals can also be found throughout the Quran. The story of Prophet Salih, told in the Quran (6: 73 and 7: 77-78), involves the destruction of the Thalmud, a nation whose people killed a she-camel against the express orders of Prophet Salih (pbuh). The story of Prophet Noah’s Flood, as described in the Quran, clearly states that Prophet Noah was asked to first load a pair of all animals and then his followers.

Contemporary Muslims clearly need to learn from their scriptures, follow the Prophet, and stop this cruelty to animals.

Sultan Shahin is the founder-editor of a Delhi-based progressive Islamic website NewAgeIslam.com