From Mystics to Marxists: Karbala in South Asian Culture

There is history and then there is the memory of history. While history is preserved in annals, its memory comes down to generations through the interplay of culture, traditions and oral accounts. 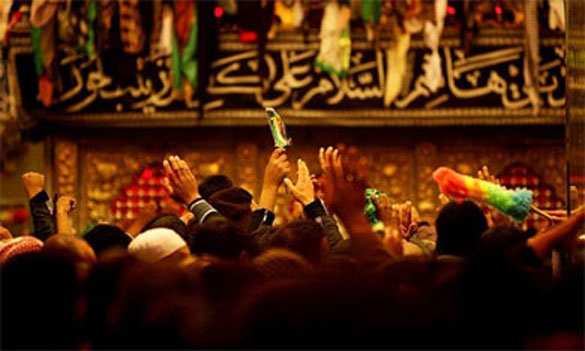 Such is the appeal of the tragedy that Karbala has become a significant constituent of the cultrural construct of the subcontinent. – AFP

Every significant event ever unfolded on the face of the earth is temporal in a sense that it occurs in a particular time-space setting, and at the same time, eternal, because of its sheer ability to recreate itself over and over again.

While the temporal aspect is discrete and entrenched in time, determining the course of succeeding events, the eternal aspect is pliable and serves as a cornerstone in times to come, in order to make sense of the past, reconcile with the present, and map out the future.

When it comes to tragedy, the memory can overshadow the event itself. Memory is human, all too human. History is not.

Karbala is memory. Such is the timelessness of the memory that the howl of Karbala still echoes in the air after all these centuries.

Such is the versatility of the symbolism attached to it that it has attracted poets, mourners, mystics, revolutionaries, devotees and writers alike.

Such is the appeal of the tragedy that Karbala has become a significant constituent of the cultural construct of the subcontinent.

How Karbala Captured the Mystics

Mysticism has been at the roots of the South Asian cultural edifice since the days of the arrival of Muslim saints (Sufis) to the Indian soil.

Wahdat al-Wajood (Doctrine of Immanence), theoretically developed by Ibn Arabi, took roots in the Indian soil because it was more Indian in character. The cry of “Ana al-Haqq” (I am Truth) raised by Mansur Hallaj on the gallows reverberated through the Muslim world and inspired people in distant lands. It was a cry of “Fana fi’llah” (annihilation in the Divine) in order to attain subsistence in God (Baqa bi’llah).

Karbala, in this particular Sufi tradition, is not mourned but celebrated because of annihilation of the physical self into the Divine.

While the commemoration of Karbala emphasises the trials and tribulations faced by Prophet Muhammad’s (Peace be Upon Him) family, the mystic celebration deals with the spiritual outcome of this particular event. The martyrdom for the will and the love for the Divine attains the highest status in this realm.

Khuwaja Moinuddin Chishti points to the same notion when he majestically says:

(The truth is that the foundation of la-illah is Hussain)

Mansur and Hussain are celebrated in the same vein within this particular tradition.

In the realm of music, the indigenous musical tradition, Qawwali, is particularly important in weaving musical notes in service of the concept of “Fana”. For centuries, Qawwals have celebrated the mystical aspect of Karbala in the verandas of Sufi shrines.

It is the same tradition taken up by the modern prophet of Qawwali, Ustad Nusrat Fateh Ali Khan. He is well aware of the context when he uses interpolation during one of his performances and rhetorically asks questions firmly entrenched and answered in the subcontinent’s mystical ethos:

Why was Tabraiz stripped off of his skin?

What did Mansur say on the gallows?

Despite all that you’ve created, it is only you who actually exist)

How It Found Roots in Urdu Poetry

Apart from shaping the mystical tradition in South Asia, Karbala has enriched Urdu poetry as well. The “Marsiya” has come to be an inseparable part of Urdu poetic tradition.

The modern Marsiya traces its roots to Awadh in northern India. With the advent of the 18th century, the Mughal empire was weaker than ever before and this gave rise to semi-autonomic states.

Awadh was one of them. Dabeer and Anis are the two most important luminaries of modern Marsiya, who wrote Marsiyas in the Awadh tradition. Marsiya depicted the memory of Karbala in indigenous South Asian imagery.

Rich in imagination, tragic in content, magnificent in diction; the Marsiyas from Awadh not only capture the seventh century butchery at Karbala, but also underscore the socio-political conditions of 17th century India.

In the background of the burgeoning state of Awadh, there was a decadent Mughal empire losing its legitimacy increasingly.

The doom and gloom in much of the Urdu poetry of the 18th and 19th century is the precursor of a social contract soon to be gone with the wind. It was in this particular historical setting that Karbala metamorphosed from a metaphor of mourning to an embodiment of revolution.

A formidable empire was soon to take the place of a decadent one.

The elite was unable to fathom the reality of changing times. Satyajit Ray has brilliantly captured this phenomenon in his landmark 1978 movie “Shatranj Ke Khilari” [The Chess Players].

The first critique on the elitist nature of Urdu literature and on Ghazal in particular, came from Altaf Hussain Hali, who called for a fundamental change in this attitude.

The world had dynamically changed and things had moved well beyond the typical beloved of Urdu poetry. The Progressive Movement took shape in 1930s and took upon itself to change the course of literature in line with the anti-imperialist left-oriented ideology and needs of modern times.

The seeming paradox as to how to reconcile the Marxist ideology – having nothing in common with the language of religion, and is at times, quite antipathetic to it – with an event of obvious religious overtones, is perhaps not as ironical as it seems on the surface.

Karbala Transcends Any One Context

All the modern ideologies, like nationalism, Marxism, anti-colonialism and socialism come from the West. It was a very peculiar socio-political European ethos which gave rise to these ideologies.

The secularised elite in colonised parts of the world – Muslim in particular – found themselves in a quandary in terms of how to communicate this particular lingo to the masses who carried the baggage of an altogether different civilisation.

It was a gigantic task to communicate modern nationalism in a part of the world where poets considered themselves as “Ghareeb ul Watan” [exiled] when they left a city for another.

This Is Where Culture And Religion Come Into Play.

This is where we see Gandhi putting up a formidable resistance to colonialism, rooted in Indian culture. This is where we see Jinnah appealing to the religious sensibilities of Indian Muslims. This is, exactly where Karbala becomes a part of universal Marxist ideology.

Probably nothing can explain this particular phenomenon better than this simple verse written by Iqbal:

(The wave is only in the ocean, outside, it is nothing)

Acutely aware of his delicate position as a Muslim reformer and well-versed in Eastern mysticism and Western philosophy, Iqbal was one of those earliest intellectuals who tried to universalise the memory of Karbala by making it trans-sectarian and trans-communal.

Influenced by Iqbal, there were still a few decades to pass when Dr Ali Shariati was to map out the ideological foundations of the Iranian revolution by utilising the Karbala imagery. Iqbal says the truth is transcendent, while the nature of oppressors and hypocrites keeps changing:

(The station of Hussain is the eternal truth

Within the tradition of The Progressive Movement, writers and poets have borrowed significantly from the memory of Karbala in their struggle against colonial and postcolonial injustice.

In the backdrop of deteriorating communal relationship, Munshi Premchand wrote a drama named ‘Karbala’ in order to bridge the gap between Indian Muslims and Hindus.

Ali Sardar Jafri gives “Al-Atash (I thirst!)”, a burning cry emanating from Hussain’s camp in Karbala altogether a new meaning by transforming it into a universal symbol of distress:

Again the caravans of people of the heart,

Are moving across the desert sand.

The river Euphrates flows with fire

The Ravi and the Ganges, stream with blood.

It is no coincidence that Makhdoom Muhayuddin invokes the martyrdom of Hussain and Jesus of Nazareth while paying his tribute to the rights activist, Dr Martin Luther King Jr. after his assassination on the evening of April 4, 1968:

(This dusk is the “dusk of the dispossessed”, this dawn the “dawn of Hunain”

So much has changed in our times. Mystics lie in their graves and have ceased to be a potent social voice.

Progressives seem to be worn out after all these years of continual struggle in the face of tyranny and oppression.

Or perhaps, nothing has changed.

The turn of the century has brought horrors upon religious minorities in Pakistan. From metaphysical metaphor and poetic symbols of revolution, the resilient memory of Karbala is increasingly transforming itself into a symbol of endurance in the face of violent militancy in our times.

History might be dead, but the memory is alive; after all these centuries, still alive. Because memory is human, all too human.

Obaidullah Aleem was well ahead of his time when he wrote these verses in the most prophetic manner:

(The caravan has already seen the day of Karbala

Suleman Akhtar is an Engineering student in Sweden, interested in society, politics and culture