Afghan Women Have No Choice but To Fight for Their Lives

Anita Zadid would divorce her husband if she could. Eight years into the marriage, her husband turned to opium and crystal meth because he couldn’t find work. He’s now addicted.

As well as taking care of her three children, Zadid, who was married at 14, says she also has to support her spouse. “Divorcing him is not an option in rural Afghanistan, but I mentally left my marriage many years ago,” the 30-year-old tells the Guardian. Sadly, she’s not the only woman to do so. 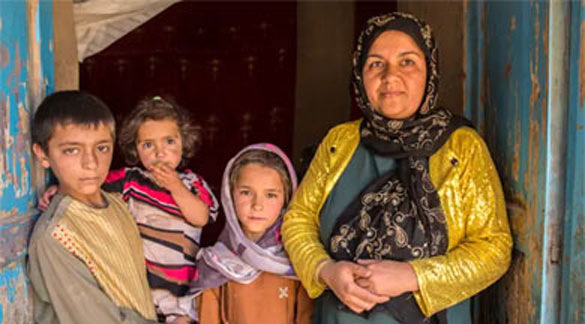 In Zadid’s village in Herat province’s Pashtun Zarghun district, an area disputed by the Afghan government and the Taliban, an increasing number of men are struggling with addiction, leaving their wives to both take care of the family and provide an income. Many men end up stealing their spouse’s hard-earned salaries to buy drugs.

The road from Herat’s provincial capital to Pashtun Zarghun is desolate and empty of checkpoints. Zadid’s village is a transitional community with a lone police car on one side, and the Taliban on the other. In the village centre, both sides mingle, Zadid explains, with many households having family members in the Taliban and on the government’s side.

“Dozens of my neighbours are facing the same struggle when it comes to addicted husbands. Many of them gather in the village’s centre, where they often smoke opium together. The Taliban doesn’t like it. They tell them off; they tell them to go home,” she explains.

Between the war and a dwindling economy, employment opportunities have been limited, with many men seeking work just over the border in Iran, which is often where they begin taking opium or crystal meth.

Drug use is rampant in Afghanistan. Figures from the country’s national drug use survey in 2015, found that between 2.9 million and 3.6 million people could be addicted – roughly one in 10 in the nation of 37 million.

A gram of opium – the soft brown substance extracted from poppies – is sold for about 80 Afghani ($1), a low price as about 90% of the world’s opium is still cultivated in the war-torn country.

The UN’s Office of Drugs and Crime says that approximately 375 tonnes of heroin enter the global market annually from Afghanistan.

In Zadid’s village – a cluster of mud houses surrounded by green fields and fruit trees – wives of addicts have now started their own saffron production businesses with the help of a local initiative, hoping to earn enough to buy food and send their children to school. Although divorce is not illegal, many women in the conservative village say it is not possible. Instead, women have sought work opportunities and talk to each other about their difficulties.

“I’ve been thinking about leaving him, but according to the law, this would mean that the children would remain with him,” Zadid says, adding that if she were to separate, she’d never think of marrying again. “He leaves the house early in the mornings and returns late at night. When he’s home, he’s kind to the children, but we barely speak. We have no relationship.”

Zadid has grown saffron in her garden for the past year, having received both training and saffron bulbs to plant. While the first year yields just up to 150 grams of the expensive spice on her 2,000-square-metre plot, the harvest should increase over the years, with a maximum production of 2,500 grams for her field, says Dr Nazir Ahmad Ghafoori, who runs the Rehabilitation Association and Agriculture Development for Afghanistan, the local group that helped the women set up their businesses.

The crops should sell at 30 Afghani ($0.40) per gram. The majority of the saffron will be exported to the Middle East, the Gulf and even Europe.

“Many wives in rural communities are made to stay at home, which means they are unable to earn an income. We’ve brought the jobs to their houses, which is especially important in communities like Anita’s,” Ghafoori says.

“If I want to leave our compound, I still have to ask my husband,” Zadid says. “He would get angry otherwise. But what he doesn’t know is how much I’m making. He spends up to 300 Afghani ($4) on drugs a day, often borrowing money. If he knew I had a small amount of savings, this could risk my children’s education.”

In addition to growing saffron, Zadid is a tailor and wheat farmer.

Bibi Gul, a 46-year-old mother of four, faces a similar dilemma. “Because of my husband’s addiction, I even had to send my children to work,” she says, sorting through a mountain of fresh red saffron, the strong smell filling the room.

The new business, she says, has brought a welcome distraction – and an additional income. “I’m managing our household alone, even though my drug-using husband still makes family decisions if he wants to,” says Gul. “I’ve learned to deal with it though.

“In Afghanistan, men are expected to work for their families, but that’s not always what happens. In my case, I have to be strong for my children, which means dealing with my husband and making sure my children will be educated. It’s an inner rebellion, but I have no choice but to fight it.”