There is a new Sharia-compliant Halal sex shop in the UK, focusing particularly on Muslim women.

The shop, according to news website Broadly, intends to differentiate itself in the market by being more discreet while catering to its female customers, who the shop owner claims are often intimidated by a sex shop’s overt “pornographic focus.”

Yet, the image of a sexually adventurous Hijab-wearing Muslim woman hunting for a sex toy, as portrayed by writer Salma Haidrani, makes for a curious juxtaposition at a time when the religion itself is under attack in much of Europe for allegedly inciting sexism, misogyny and violence among its adherents. 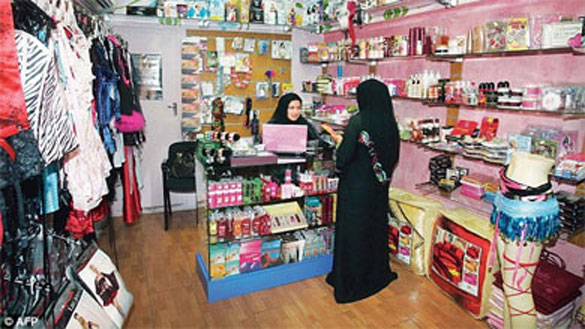 Sex shops are not uncommon in the Muslim world. (Above) a view of the first sex shop in Bahrain.

Does this mean Islam in Britain is distinct from its counterparts in India and other parts of the world, including the version practised by the now much-disparaged people of Arab and North African origin?

Or is this yet another attempt by the Western media to exotify Muslims as a community that doesn’t integrate with the rest of society?

There were reports of a similar Halal sex shop opening in Mecca last year. Though it never opened, the story made headlines around the world, because the idea of a Muslim sex shop - and that too in Mecca - runs contrary to what many people today equate Islam with: prudery and repression, making the news sensational.

But Islam, unlike Christianity, is not an anti-sex religion. (Sex shops, incidentally, are not uncommon in the Muslim world.) There is nothing un-Islamic about sexuality for Muslims, though scholarship is divided on how liberal the faith is when it comes to the act.

While there are scholars who quote the Prophet Mohammed extolling the pleasures of sex, there are others who staunchly deny this, saying that the Quran is completely neutral on the subject.

The reason for this discrepancy is that understanding Islam is a more complex task than Christianity, with which it not only shares common religious and cultural history, but also grievances. (Remember the jihadist’s reference to crusades after the Paris attacks.)

Islam ought to be viewed at three different, yet inter-linked levels, suggests Palestinian author Edward Said in Covering Islam.

First comes the Quran itself.

Second is the huge corpus of Quranic commentaries (Tafsir), the various biographies of the Prophet (Sira), and the collection of reports that claim to quote Prophet Mohammed verbatim (Hadith).

The third is the practical level at which the ideologies have been lived and followed in various parts of the world.

This makes any reductionist generalisations of Islam pointless, as the way in which it is lived and practised often vary, depending on the cultural context. This phenomenon is also applicable to “modern” Christianity in the Indian context, albeit to a lesser extent - more on that later.

Scholars like A. Faiz ur Rahman, secretary-general, Islamic Forum for the Promotion of Moderate Thought, dismisses Hadiths that quote Prophet Mohammed on sex, saying that the Quran neither extols nor condemns sex, let alone mentioning anything about sex toys.

“The Quran doesn’t say anything on autoerotic toys or sexual stimulation except that it strictly prohibits sex outside marriage,” says Rahman.

Similarly, it is also unfair to blame Islam alone for inciting misogyny, sexism and violence in the world, any more than Christianity, though many Christians today remain blissfully ignorant about their own faith’s dark and gory past.

The 300-year long witch-hunt by Orthodox Christians, which led to sexual mutilation, torture and killings of hundreds of women in Europe, in the name of devil worship, till the 18th century is regarded by historians as “the deepest shame” of the Western civilisation.

The fear of female sexuality during this period saw Christian preachers denouncing women for the “lascivious and carnal provocation of their” garments.

If Christianity appears mild and rational today, it is not because the faith has suddenly turned tolerant, but due to generations of free thinkers who from the Renaissance to the present day, have made Christians ashamed of their traditional beliefs, as put by the British philosopher Bertrand Russell.

A residue of Christian misogyny can still be traced in the attitudes of several Syrian Christians in Kerala, a community that boasts of a religious history as old, if not older than that of Continental Europe, but berates women for showing too much fringe, going out in the company of unrelated male and invoke morality to keep them in line, even to this day.

Just as there were Christians who fought the tyranny and brutality of orthodox beliefs throughout history, a vast majority of Muslims also reject the ISIS brand of Islam.

The point is that sexual assaults, like terrorism, in a modern secular society, should be regarded as a crime independent of religion and dealt with the strictest of punishments.

Coming back to the Halal sex shop, Rahman for one is convinced that the shop is nothing more than a clever marketing ploy to reach out to an untapped Muslim audience.

“There is no scriptural basis to claim Sharia compliance for sex toys or call them Halal,” he says.