Choosing To Live In a Muslim 'Ghetto' 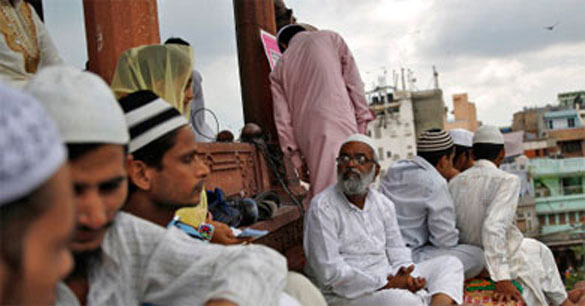 When Vishank Singh took admission in Jamia Millia Islamia, he realized it would take him two hours to reach the campus from his present address in north Delhi. It, therefore, made sense for him to shift to a home closer to the university.

Though nobody from Vishank's family objected to him staying in what has often been described as a Muslim ghetto, he did attract some curiosity while shifting to Jamia Nagar. "The transport loader who was helping me shift got a little scared when he came to know the address. He said that only Muslims live over here," says Vishank.

Vishank stays in a flat situated in Ghaffar Manzil with two of his classmates. While one is a Bengali, the other happens to be a Kashmiri Pandit. Vishank doesn't believe in organized religion but he keeps a painting of Lord Krishna in his apartment.

I have never faced religious discrimination... My Muslim landlord has come to our flat several times but he never objected to Lord Krishna's painting in my room.

"I have never faced any religious discrimination in Jamia Nagar. My Muslim landlord has come to our flat several times but he never objected to Lord Krishna's painting which I've put up in my room," says Vishank.

Hailing from Kanpur city of Uttar Pradesh, Vishank earlier resided in the Muslim-dominated locality of Chamanganj in his home city. "I find the Muslims of Jamia Nagar to be far more progressive than the ones I've lived with before. I think that is because Muslims here have had access to education," says Vishank.

When the police came for identity verification of tenants at Vishank's accommodation, they were surprised to find three Hindu boys living together in Jamia Nagar.

"The policeman who was the same caste as me told us that if you face any difficulty then kindly contact me. But I never encountered any such problem," he adds.

However, the local police haven't been as gracious towards every resident of Jamia Nagar.

Photographer Javed Sultan was living with a friend in Jamia Millia Islamia's hostel when the infamous Batla House encounter took place in 2008. Post the encounter, Javed started feeling increasingly unsafe in the area.

"Random detentions were common. It was a very difficult period for everyone in Jamia Nagar, especially those who were living alone. I decided to move to Laxmi Nagar where a few of my relatives were staying," says Javed.

In Laxmi Nagar, he found his neighbours to be extremely good. He developed a very close bond with one of the families.

"But during Ramadan when I used to go for the Morning Prayer, some people looked at me as if I was an alien," says Javed.

Javed returned to Jamia Nagar after two years when he became a permanent employee of Jamia Millia Islamia. "It is better to live within your own community. I have friends and colleagues residing here. My office is also hardly one kilometre away from my place," says Javed. He says that he still doesn't feel entirely safe here but realizes that one can be made a scapegoat no matter where one lives.

Dismissing claims of Jamia Nagar being a centre of Muslim extremism and fundamentalism, he states that good and bad people can be found everywhere.

"People who say such things have heard stories and never got a chance to hang out with people of Jamia Nagar. Many non-Muslim students of the university live in Jamia Nagar. I guess they are all living happily," says Javed.

Javed feels that it is incorrect to label the whole of Jamia Nagar as a Muslim colony, but he does assert that one can find more educated Muslims here than in Old Delhi, Seelampur or any other Muslim-dominated area in the city.

In 2009, Gowhar Farooq moved from Srinagar to New Delhi. He was initially living in Lajpat Nagar but soon moved to Batla House.

"Lajpat Nagar was expensive. Also, as a person who heard Azaan (the Muslim call for prayer) five times every day in Srinagar, Lajpat was different," says Gowhar.

Gowhar believes that a preference for living alongside their community members is not restricted to Muslims. "Why should we question them if they (Muslims) do so? Other minorities also prefer living together. There is nothing wrong in it. Also, considering the communal tensions post the Babri Masjid demolition, Muslims prefer living among their community members," he adds.

Due to economic and security reasons-- as well as because of alienation and discrimination--many Muslims continue to dwell in localities where they are in the majority.