Many women are profiting from reserving places in the Grand Mosque for other worshippers.

These women use their handbags, personal belongings, or chairs to reserve places for worshippers who pay for the service because they come late for prayer and cannot find suitable places to pray. 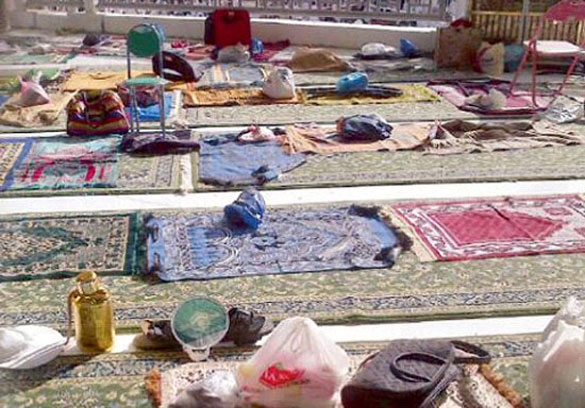 Women use handbags and other personal belongings to reserve space inside the Grand Mosque in Makkah. — Okaz photo

Some women even reserve places by asking some African women to bring their children and cover a larger area for other worshippers. They are paid SR200 for the whole day.

This is especially the case on days when the mosque is very crowded, such as Friday nights, Mondays and Thursdays, Ayyam Al-Beed (three days in the middle of each Hijri month) and in Ramadan.

Female guides at the Grand Mosque say such women profit enormously from this practice and some make an income that is enough for a whole year. One guide said such behaviour is not allowed in the Grand Mosque and when guides try to reason with these women they are attacked.

The guide added that places are mostly reserved around Hunayn, Bilal and King Abdulaziz gates, in addition to the women's sections on the upper floor.

Noor Qarout, head of the women's guides unit in the Grand Mosque, said scholars have denounced the practice of reserving places in mosques and places should be freely available for those who arrive first.

Head of Media and Public Relations in the Presidency of the Two Holy Mosques Ahmad Al-Mansouri said female guides in the Grand Mosques have to deal with many negative behaviours, including reserving places.

He noted that during Ramadan, the guides are supported by women police officers to minimize this phenomenon.

He pointed out that the Grand Mufti Sheikh Abdulaziz Al-Alsheikh has issued a fatwa (religious edict), saying that reserving places in mosques is against the teachings of Islam.

The mufti said those who come early to the mosque and sit in the back rows will have better rewards from God than those who come late and pay for a place in the front rows.

He said the reward for "being ahead" is not simply for sitting in the front rows but for coming early to the mosque.