A Brief History of the Holy Kaaba 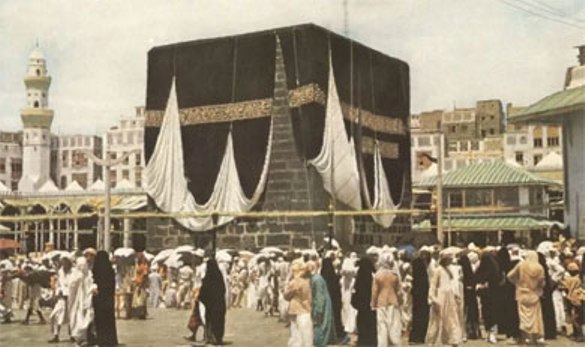 In the province of Hejaz in the western part of Arabia, not far from the Red Sea, there lies the town of Makkah. In the centre of this town there is a small square building made of stones, about 60 feet long, 60 feet wide and 60 feet high. Since time immemorial, this town and this stone built world travellers have known house. This is Baitullah, the House of Allah. Its sanctity and antiquity is older than history itself.

A House for the People

Tradition goes that the Kaaba was ordained by Allah (swt) to be built in the shape of the House in Heaven called Baitul Ma’amoor. Allah in his infinite Mercy ordained a similar place on earth and Prophet Adam was the first to build this place.

In the Chapter of Genesis from the Bible, it describes the building of the Kaaba to be the occasion in which God ordained Abraham to erect a Shrine for worship. This was when Abraham was ordered to go to the Southern desert with his wife Hajera and infant son Ismael. The Old Testament describes this building as the Shrine of God at several places, but the one built at Ma’amoor is very much similar to the one at Makkah. There is no doubt that it was referring to the stone built house at Makkah.

The Holy Quran brought this story into the full light of history:

“Allah has spoken the Truth; therefore follow the creed of Prophet Ibrahim, a man of pure faith and no idolater.” (3:90)

The first house established for the people was at Makkah, a Holy place and guidance to all beings. Qur’an firmly establishes the fact that Prophet Ibrahim was the real founder of the Holy Shrine. When Prophet Ibrahim built the Holy Shrine in Makkah, his prayers were that this place should remain a centre of worship for all good and pious people; that Allah should keep his family the custodians of the Holy place.

The First Custodians of the Holy House

Ever since, it is Ismael, the son of Prophet Ibrahim, who helped his father to build this place and his descendants, remained the custodians of the Holy Shrine. History tells us that centuries passed and the guardianship of the Kaaba remained in the family of Ismael until the name of Abdul-Manaf came into the limelight. He inherited this service and made it much more prominent.

His son Hashim took this leadership and extended it to many other towns of Hejaz so much so that many pilgrims flocked annually to this place and enjoyed Hashim’s hospitality. A feast was given in honour of the pilgrims, the family of Hashim served food and water to all guests. This prominence created jealousy and his brother Abdu-Sham’s adopted son, Umayyah, tried to create trouble.

There was a dispute in which Umayyah failed and left Makkah to settle down in the Northern provinces of Sham, what is now modern day Syria. After Hashim came his brother Muttalib and after him, Hashim’s son Shyba (who became known as Abdul Muttalib) assumed the leadership of the family. He organized feasts and supplies of water to the pilgrims during the annual festival of Pilgrimage to the Holy Shrine.

Prophet Ibrahim and the Idols

Prophet Ibrahim built this House for devout worship to one God. But within his lifetime, people disobeyed his orders and began to put idols inside the Kaaba. Prophet Ibrahim had to clean the House of these idols and of these idol worshippers. He told the people that this was a symbolic house of God. God does not live there for He is everywhere. People did not understand this logic and as soon as Prophet Ibrahim died, the people filled the place with idols again. They thronged to this place annually and worshipped their personal gods.

It was over 4000 years later that the last of the line of Prophet Muhammad (peace be upon him) entered Makkah triumphantly, went inside the Kaaba and, with the help of his cousin and son in law, Ali Ibn Abu Talib and destroyed all the idols of Kaaba with their own hands. At one stage of this destruction of idols, the tallest of the idol, Hubbol, was brought down after Ali had to stand on the shoulders of the Prophet to carry out God’s orders. The Prophet of Islam was reciting the verse from the Qur’an: “Truth hath come and falsehood hath vanished.” (17:81) This was done in the 8th year of Hijra, January 630 AD after the bloodless victory at Makkah by the Prophet of Islam.

Historically, when Prophet Ibrahim was ordered by Allah to build the shrine for worship, he uncovered the original foundations of the Kaaba built by Prophet Adam. Prophet Ibrahim, with the help of his son Ismael, erected the new shrine on the same foundations. Originally it contained only four walls without a roof.

Centuries later, during the time of Kusayi, who was the leader of the Tribe of Quraish in Makkah, a taller building was completed with a roof and a quadrangle wall around it to give it the shape of a sanctuary and doors all around the sanctuary walls. People entered through these doors to come to the Kaaba for worship.

It is now about 60 feet high, 60 feet wide from east to west and 60 feet from north to south. A door is fixed about 7 feet above ground level facing North East. A black stone (Hajar al Aswad) was fixed into its eastern corner. In front of the building was Maqam Ibrahim, the arch shape gate known as that of Banu Shayba and the Zamzam Well.

Just outside are the Hills called Safa and Marwa and the distance between the hills is about 500 yards. These days, both of the hills are enclosed into the sanctuary walls with a roof over it.

All Sides of the Compass

The whole building is built of the layers of grey blue stone from the hills surrounding Makkah. The four corners roughly face the four points of the compass. At the East is Rukn el Aswad, at the North is Rukn el Iraqi, at the West al Rukn el Sham and at the South is Rukn el Yamani.

The four walls are covered with a curtain (Kiswa). The Kiswa is usually of black brocade with the Shahada outlined in the weave of the fabric. About 2/3rd’s of the way up runs a gold embroidered band covered with Qur’anic text. In the Eastern corner, about 5 feet above ground, the Hajar el Aswad (the black stone) is fixed into the wall. Its real nature is difficult to determine, its visible shape is worn smooth by hand touching and kissing. Its diameter is around 12 inches.

Opposite the Northwest wall but not connected with it, is a semi-circular wall of white marble. It is 3 feet high and about 5 feet thick. This semi-circular space enjoys an especial consideration and pilgrims wait in queue to find a place to pray there. The graves of Ismael and his mother Hajar are within this semi-circular wall. Between the archway and the facade (N.E.) is a little building with a small dome, the Maqam Prophet Ibrahim. Inside it is kept a stone bearing the prints of two human feet. Prophet Ibrahim is said to have stood on this stone when building the Kaaba and marks of his feet are miraculously preserved. On the outskirts of the building to the North East is the ‘Zamzam Well’ but this has now been relocated and placed under ground).

In Surah Baqara from the Holy Quran, verses 121-127 described clearly that Allah had ordained his servant Prophet Ibrahim to build the Shrine there for worship of One God. During Kusayi’s time, it was rebuilt and fortified. During the early years of Prophet Muhammad (peace be upon him), before he announced his ministry, floods damaged the Kaaba and it was rebuilt again.

He advised them to place the stone in a cloak and ordered the heads of each Tribe each to take an end and bring the cloak nearer the corner on the Eastern side. He himself then took out the stone and placed it in its position. It has been fixed there ever since.

After the martyrdom of the family of the Prophet at Karbala in 61 Hijri (681 AD), the Umayyad Caliph, Yazid Ibn Muawiyah did not stop there in the pursuit of his destruction. He sent a large contingent under the command of Haseen Ibn Namir to Medina, which destroyed the Mosque of the Prophet. They did not stop there, and proceeded to Makkah and demolished the four walls of the Kaaba and killed thousands of Muslims who protested in the process. Yazid died and Ibn Namir returned to Damascus, so Abdullah Ibn Zubayr and his associates rebuilt the Kaaba.

Umawi forces came back to Makkah and killed Abdullah Ibn Zubayr and proceeded to hang his body on the gates of the Kaaba for three months for all to see. But eventually this arrogance of power brought its own consequences and Mukhtar became the ruler in Iraq. Under his guidance, the Kaaba was refurbished and pilgrims began to arrive in safety to perform Hajj.

The Kaaba successfully withstood the Karamatian invasion of 317/929; only the black stone was carried away, and this was returned some twenty years later. In the year 1981, the Wahhabis brought tanks inside the Kaaba to crush the Kahtani revolution against the Saudi regime and almost demolished the South Eastern Wall. This was later restored with the help of the Makkahn people.

The Direction of Prayer

About a year and a half after the migration of the Prophet, the Muslims were ordered to turn towards Makkah for the direction of their prayer. The particular mosque in Medina where the Prophet instructed this is called Masjid al-Qiblatain, meaning the mosque with two Qiblas. This is due to the fact that the original direction of prayer was towards Jerusalem. The Qur’an tells the Muslims,

“Turn then thy face towards the sacred mosque and wherever ye be, turn your faces towards that part.” (2: 139-144)

At this same period, the Qur’an began to lay stress on the religion of Prophet Ibrahim, presenting Islam as a return to the purity of the religion of Prophet Ibrahim that, obscured by Judaism and Christianity, shone forth in its original brightness in the Qur’an. The pilgrimages to the Kaaba and ritual progressions around the building were continued, but were now for the glorification of One God. The Abrahamic vision of the Kaaba created a means of discerning an orthodox origin buried in the midst of pagan malpractices to which the first Muslims pointed the way.