On the one hand European countries like Slovenia and New Zealand have defeated Corona virus by dint of discipline, a sense of collective social responsibility and timely actions taken by their governments, and on the other, the Asian countries like India and Pakistan have been taking decisions on government level that have aggravated the Covid-19 situation in both the countries. 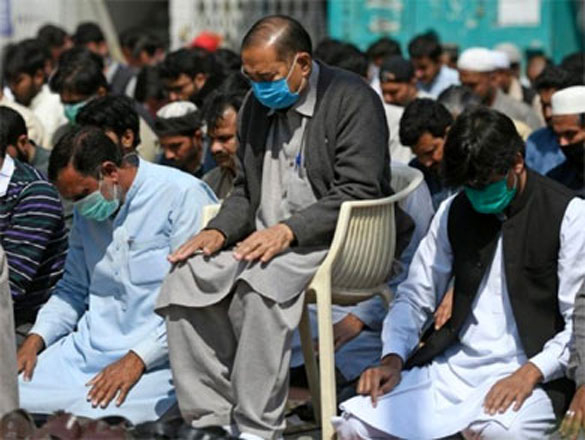 In India, a country of 130 crore people, the number of corona patients has reached 2,50, 000 with over 9000 new cases daily and over 8,000 deaths so far. It is because of the communal approach of the government and the media of India who were more interested in vilifying Muslims as Covid carriers than in honestly containing the pandemic.

In Pakistan the situation has aggravated because of wrong policies of the government, the inherent indiscipline of the Pakistani Muslims and the obstinacy of the religious leadership. The result is that Pakistan is today sitting on a virtual Corona bomb. The total number of Covid patients in the country of 22 crore people has reached 1, 23, 000 with 6000 new cases yesterday and 100 deaths in one day.

With a population that is one fifth of the population of India, Pakistan has half the patient count of India. This shows the severity and enormity of the pandemic situation in Pakistan. While the number of new cases in India is 9000, in Pakistan it is 6000. Ideally, it should have been less than 2000. The situation has come to such a passé that the many politicians and bureaucrats have contracted Covid-19. For example, former Punjab Chief Minister Shahbaz Sharif has tested positive. 3 ministers and 3 assembly members of Sindh have contracted the disease. The president of Islamabad High Court Bar Association is also among the patients. The former IG, Punjab, Major Mushtaque died of Covid-19. In fact, the federal minister of Pakistan Fawwad Chowdhary has even claimed that almost one third of the Parliament members of Pakistan have contracted Covid-19. That's why, the Pakistan People's Party has demanded that the Sindh Assembly should hold online assembly sessions.

The situation in Pakistan has reached this stage mainly due to the wrong Covid-19 policy of PM Imran Khan who has been against strict lockdown as he gave more importance to economy. Even after imposing lockdown in March, his government eased out lockdown in the first week of May allowing businesses to reopen between dawn to dusk. The WHO criticised Pakistan government for not meeting standards for easing lockdown.

The religious community added to the problem due to their misplaced religious zeal. They opposed government restrictions on Mosques and on 14th April many religious organisations held a united meeting in Lahore demanding relaxation to mosques for congregations. The government bowed down before them and mosques were allowed to hold collective prayers with social distancing norms. However, social distancing norms were seldom followed in mosques during five-time prayers and during Tarawih prayers in Ramadhan. Earlier, the Tablighi Jamat of Pakistan held an Ijtima in Lahore which also added to the problem. According to the reports in Pakistani newspapers, 2682 cases of Covid-19 were traced back to the Ijtima.

The callousness and indifference of common Muslims also caused the problem to worsen as they did not follow social distancing norms in society despite apples by ulema and political leaders.

Reports of mismanagement in health services, lack of hygiene in hospitals and quarantine centres are insufficient supply of medicine are common. Sparingly, the Punjab government has closed down five quarantine centres and a 50-bed temporary hospital at a time when they were needed the most.

Even in this situation, madrasa and private school management have been demanding relaxation in lockdown for them. The management of Madrasa Islamia Nayimia have demanded permission to reopen madrasas claiming Corona will not spread from madrasas. The All Pakistan Private Schools Association has also demanded a relaxation in lockdown for private schools. The opening of Madrasa and schools will definitely expose children to the threat of Covid-19 but the management of Madrasas and schools give more importance to financial gains and employment of their teachers than the lives of children in a country which is sitting at the site of an impending Covid-19 explosion.

Now the government is contemplating a strict lockdown when the situation has gone out of control. It is contemplating sealing thousands of areas, business houses, malls etc to contain the spread of the pandemic. Offices will not allow people without masks; visitors to government offices will have to wash their hands before entering their complexes. But these measures now seem belated. India is also contemplating another phase of lockdown as the situation in some states seems to have gone out of control. The situation in both the countries has aggravated due to the wrong approach and decisions of the government. The sooner both the countries realise their mistake, the better.