Islam Does Not Support Ill Omens and Irrational Beliefs

Islam is a modern religion and it has promoted a scientific way of thinking among its followers. It rejects retrograde beliefs and way of thinking of the Jahiliyyah (pre-Islam era) and discouraged irrational and unscientific beliefs. The Quran has raised curtains over many scientific facts which were corroborated by modern scientific discoveries.

Many retrograde beliefs were common among the Arabs in the ancient times. In other parts of the world too, irrational and unscientific beliefs were common. Islam rejected these beliefs. It disapproved of untouchability, belief in the inauspiciousness of days and months, superstition and ill omens which were widespread in Arab and other Asian and African countries.

These beliefs were common not only among Muslims but also among the followers of other religions. Some diseases were believed to be infectious i.e. plague. Untouchability is also common in many societies. The upper caste people do not dine with the lower caste people. The custom of untouchability has created differences in the society. But the Quran and hadiths do not support such inhuman behaviour and attitude. Hadiths reject untouchability, ill omens and superstition. 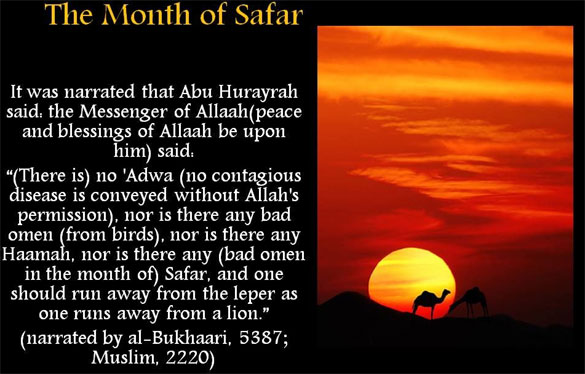 Hadhrat Abu Hurairah narrated: The holy Prophet Pbuh said, "Ill omens is nothing but good omens exists." People asked, "O Prophet of God pbuh, what is a good omens?". The holy Prophet pbuh replied, "Any good word that anyone of you hears ".

Another hadith on the issue is as follows:

Hadhrat Anas narrated that the holy Prophet pbuh said, “Infection (Adwah), and ill omens is nothing but I like good omens. What's that? Any good word."(Kitab al Fal 435: Sahih Bukhari)

Hadhrat Abu Hurairah narrated that the holy Prophet said, “Infection, ill omens, or inauspiciousness of the owl or the month of Safar is nothing."(Sahih Bukhari: 436)

These hadiths clearly describe the beliefs in ill omens or inauspiciousness of the month of Safar or the owl as irrational and baseless. Such beliefs are the result of the ignorance of Quran and hadiths. Islam does not support such unscientific and irrational beliefs.